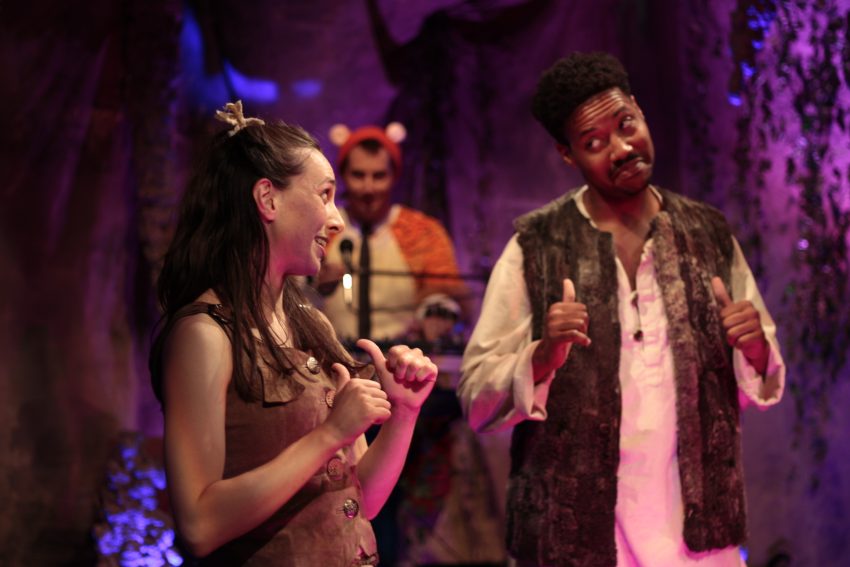 When you enter the great cave at Z Space for Faultline Theater’s “Caveman Play” by Savannah Reich, it’s filled with young folks who know something new and fresh is about to happen. Whether you sit on a stump or bench, you feel we are all in this together.

When charming Dandelion (Amitis Rossoukh) strolls out in her semi-cave, semi-modern gear, she has a new bright idea. She’s determined to make a “presentation.” All ready with a slide show, Dandelion introduces her tall, hesitant partner, loyal Rocky (Conrad Cheeks). Rocky is sensitive and easily manipulated—not quite sure about this project.

Clearly, Rocky dotes on Dandelion: he sidles up to her while she delivers a very high school pitch about the glories of her new discovery: It’s called AGRICULTURE, and promises lots of benefits. And lots of work.

Dandelion gives us the hard sell on AGRICULTURE, and she’s damned convincing, and comically overbearing, too. She polls us in the audience—we are still a bunch of Hunter-Gatherers, you know. We laugh out loud as she expounds the glories of the cave and a new way of life. Dandelion promises us a warm place, reliable food, and the end to our “Existential Dread.” Hunting wild beasts is hard, after all.

This civilized couple have adopted a tiger as their pet—obviously the first domesticated beast. Douglas the Tiger is played with warmth and patience by Cole Ferraiuolo. In his sweet tiger suit, Douglas supplies keyboard. Douglas likes the arrangement, so long as he gets fed, regularly, a practical cat.

We’re on track for a wittily manipulated town hall with Dandelion presiding—when in comes Nic A. Sommerfeld as Chicken Feathers. Nic wears furs and feathers that indicate loyalty to the Hunter/Gatherer crowd. Nic makes eyes at handsome Rocky, trying to woo him away from Dandelion and her project. In fact, noisy, intrusive Nic disrupts the whole meeting, and gets into several delightful debates.

Well, it seems like we are at a crossroads in our clueless, self-destructive prehistory. Will we choose to hunt or opt for the cozy cave?  We are all used to going out and chasing beasts, but now there’s a choice to make—the CAVE or the FOREST?

Two brilliantly funny summation speeches outline where the whole disastrous agriculture thing will lead—cell phones, plastic bags, global warming!  Obviously, we get to vote—and the winning side is different each night. Brilliantly directed by Weston Scott, we all join in the fun.

At the core of Savannah Reich’s hilarious and heart-warming show, decisions must be made. Even your own vote will surprise you. How can we enlighten ourselves about the consequences of this seemingly simple decision? Can we use this info to make better decisions? I think SO!