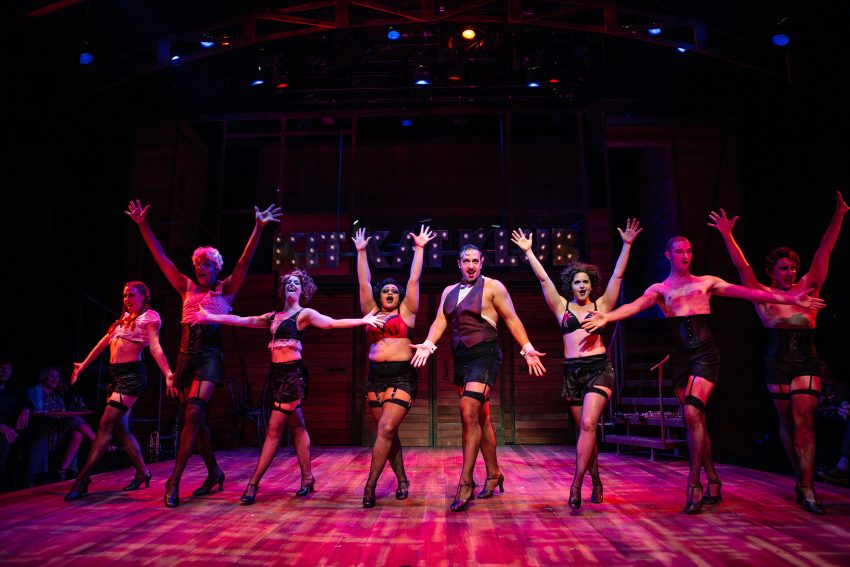 S.F. Playhouse’s bright new “Cabaret” puts us smack into the Kit Kat Klub in 30s Berlin, with a great band onstage. Director Susi Damilano gives us a superbly talented cast with amazing standout Cate Hayman as Sally Bowles, the nightclub’s singer. Set in early Nazi Germany, when history turns and the world shakes, “Cabaret” re-creates the hopes, fears, and lusts of dreamers out for a good time in the years just before and after Hitler comes to power.

We can’t help but laugh at the start as the young, gay American writer Cliff Bradshaw (Atticus Shaindlin) hilariously recites “Casey at the Bat,” while Sally is seducing him at the Kit Kat. And we feel dread when, at the end, the “degenerate” Kit Kat Klub dancers are marched off in black and white striped “pajamas.” In the finale, their gender-bending low-cut outfits are gone, while smoke from a Nazi death camp fills the stage.

The great musical pulls us in: we feel the siren call of the unforgettable anthem “Cabaret,” performed by the live band conducted by Dave Dobrusky, barely visible on the stage’s second story. They tell us to forget about our cares, and just come play:

What good is sitting alone in your room?
Come hear the music play
Life is a cabaret old chum
Come to the cabaret…

What good permitting some prophet of doom
to wipe every smile away
Life is a cabaret old chum
So come to the cabaret!

Freedoms that were once accepted are now assaulted: sexy and liberated cabaret life, Jewish people and culture, “dangerous” political ideas and artists. When naive Cliff falls for Sally, we gasp with him when a “friend” of his turns up wearing a Nazi armband!  And the impending marriage of Fraulein Schneider (Jennie Brick) and Herr Schultz (Louis Parnell) is attacked because Schultz is denounced as a Jew.

The chilling scene of their engagement ends with most of their friends intimidated, singing the Nazi anthem “Tomorrow belongs to me.” They conclude with the “Heil Hitler” salute. What better testimony to the creeping rise of fascism?

The Kit Kat dancers enchant us, breaking taboos with sexy skits—think Pride Plus.  The handsome Emcee (John Paul Gonzalez) smashes gender barriers from the moment he stretches out his leg in garter belt, nylons, and high heels. Early Nazi Berlin life transforms itself before  our eyes.

On the stage that once had gender-smashing songs, now the Emcee viciously sings the anti-Jewish song: “If you could see her through my eyes.” Even music is mobilized to promote the oncoming horror.

We leave the theater moved and challenged by this new and powerful “Cabaret.” Two days after Damilano’s “Cabaret” opened, hundreds of Jews marched in San Francisco protesting the disgusting U.S. camps full of immigrant children and parents on our border with Mexico.

All over the country, people are raising the slogan: “Never Again Is Now!”  Fascism and concentration camps have reappeared in the national debate. This new “Cabaret” resonates for us, sounding the alarm—we must listen. This “Cabaret” makes magnificent music, and memories that move us to action.