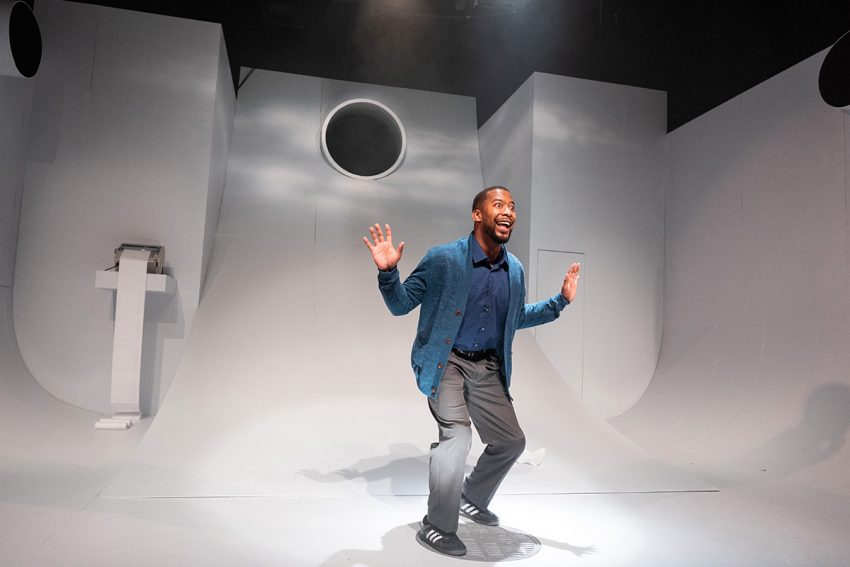 Appearing in flashes of blue lightning, or flushed through a huge round pipe, each young man arrives, one by one, bewildered. Later, they try out minstrel song and dance to engage the audience, whom they can see but not touch. Each man wonders out loud why white people find him “scary.”

They are in some sort of Hell—or Purgatory—hard to say which one. It’s an indefinable bone-white Limbo where violently murdered Black men, cut off in the prime of their lives, get to look out at the mostly white audience, and finally speak their minds.

And we learn a lot from them, while a white printer on a cross-shaped white shelf spits out a long, long list of Black victims. Stephanie Anne Johnson’s lighting and Theodore J.H. Hulsker’s video effects, conjuring sudden blackouts and eerie blue rivers, make the actors’ sudden entrances gripping and impressive.

First, in a clap of thunder and lightning, Isa arrives, played by wise, warm-hearted Edward Ewell in a preppy blue cardigan. Isa tries to engage us with song and story, making me feel the invisible barriers between audience and actors, and between races.

Next comes Grif, lively Lenard Jackson, who is smart, cool, and resourceful. He uses his brains to figure things out, but he cannot contact us. We feel his frustration.

The third man, powerful Tre’Vonne Bell, arrives almost dead, yet he proves to be feisty and full of life. In a brilliant striped sweater, as Daz, he’s the hippest, happiest, most honest dude—he would be a dazzling good friend. I remind myself that these sharp guys are already dead, giving me a shiver of fear and dread.

Grif, Daz, and Tiny link arms, singing and dancing. That’s how the Man keeps us all in line—invoking minstrel performance and Black talent. Choreography by Laura Ellis and director Darryl V. Jones makes it clear that minstrelsy is still with us.

Trapped between slave ship and skate park, life and death, song and dance bring to light how we are still betraying black youth.

The last arrival, who slides reluctantly down the tube, 15-year-old “Tiny” (delightful Dwayne Clay) carries an orange toy gun. Tiny wonders what happened to him, arriving fresh off a game of “cowboys and aliens.” He does not yet remember that it was him the police shot. Clay’s boyish innocence affects us all.

Shotgun Players and Lorraine Hansberry Theatre have created a “Kill Move Paradise” that ranks as a masterful work of dramatic art. Director Jones has assembled a poetic panorama of the systematic murder of Black men that uses real life stories to breach the wall between us.