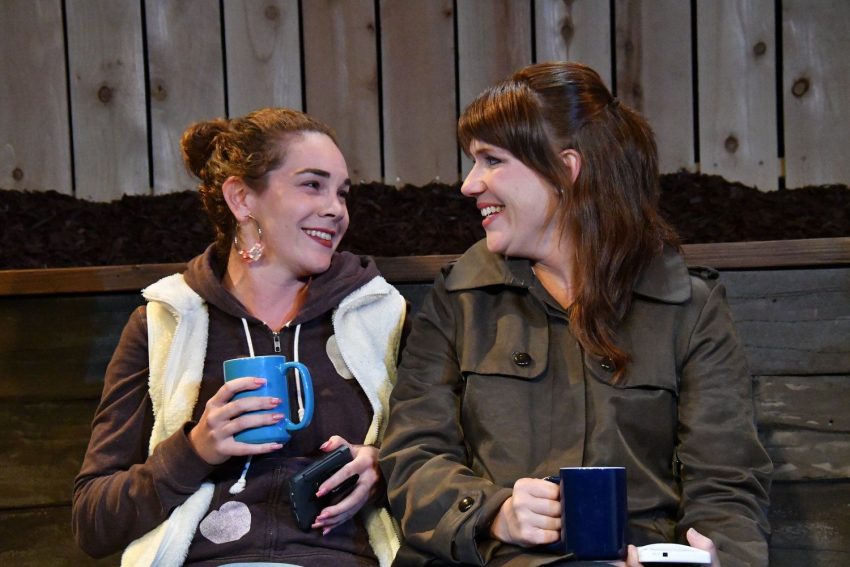 Molly Smith Metzler dishes up a plate of delicious social class issues, and director Molly Aaronson-Gelb, delivers the flavors. In a simple backyard, complete with fence and redwood chips, two new moms have a hilarious coffee klatch, limited by the ranges of their baby monitors. You don’t have to be a mom to enjoy it, although I am, and I did.

“Cry It Out” zeroes in on early motherhood with exacting precision. Metzler uses the strains of motherhood to deliver a funny and poignant comedy of class and gender.

Delightful Lina, a working-class Long Islander and new mom, and her husband, are forced to live with his mother to save money. Lina’s rough exterior lends hilarious comic relief to the conversation. Martha Brigham beautifully threads the needle between tough, funny working girl and emotionally giving friend.

Jessie, a corporate lawyer from Manhattan, finds herself trapped in the suburbs with a new baby. Emotionally authentic Lauren English plays Jessie brilliantly, pouncing on Lina in the local Stop & Shop, desperate for companionship. The two become fast friends, using the yard between their houses to meet.

Class differences start to arise when Lina’s inevitable return to a working-class hospital job clashes with privileged Jessie’s plan to stay at home. We’re on the edge of our seats, as the two women confront the demanding class barriers that separate them—reliable babysitting, expensive pre-schools, and distracted husbands.

Justin Dupuis does a superb job as Mitchell, a wealthy businessman who has been watching the ladies through a telescope. Dupuis settles into a deeply emotional role with grace and tenacity.

Mitchell begs the friends to include his wife, Adrienne, in their daily sessions, because she is lost and alienated as a new mother. Perfectly bitchy Adrienne (talented Lauren Spencer) refuses to bond with the other moms. She embodies the mystery of a rich, aloof, and troubled new mother.

Adrienne asks why she has to be the one who has to step away from her successful career as a jewelry designer, and not her husband. A really fucking good question that our two moms didn’t even consider. What’s the solution for rich and poor when it comes to the work vs. baby conundrum?

All three couples have new babies, but their lives are as different as their bank accounts. “Cry It Out” delivers hilarious laughs and serious thoughts on three wildly different women as they face new and surprising lives.

Motherhood instantly deprives us of the life we knew, in unfamiliar territory, both glorious and horrific. Each woman starts again, under multiple pressures. She must forge new paths, bouncing from the highest highs to lowest lows.

“Cry It Out” by Molly Smith Metzler, directed by Molly Aaronson-Gelb, by Just Theater, with Custom Made Theatre, San Francisco, through Sunday, September 1, 2019. Info: custommade.org