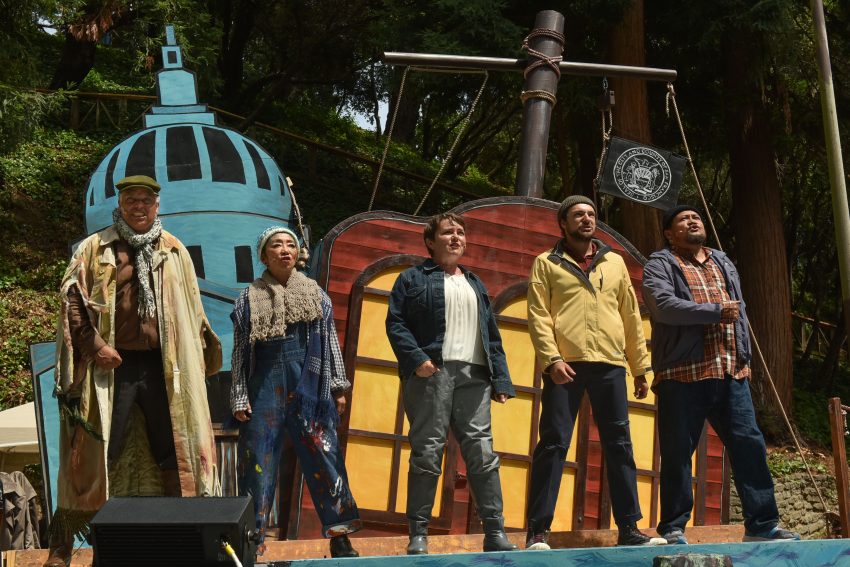 Anyone living in the Bay Area today can tell you that we are in the midst of a housing crisis. Class divisions are at an all-time high as the price of living skyrockets, while wages remain pitifully low. With tech tycoons flooding the market, recent college grads rent couches for $850 a month, working people clamor for affordable housing, and homeless folks compete for meager shelter beds.

In Michael Gene Sullivan’s clever adaptation of  Treasure Island by Robert Louis Stevenson, the San Francisco Mime Troupe lives up to their reputation as a hallmark of progressive political theater. In their 60th year, the fabulous Mime Troupe boldly takes on the S.F. housing crisis with humor and style.

In parks across California, the Mime Troupe’s live band plays 60s classics as eager fans set up picnics. A bright cartoon set renders a massive boat in front of San Francisco’s City Hall—creating the illusion that city government is, itself, a sinking ship.

The key to housing corruption in the Bay lies in an encrypted hard drive left behind by Flynn Properties—a real estate corporation which ingeniously mirrors the unspeakably cruel Captain Flint. To crack the code, Hawkins sets sail for Treasure Island, a defunct Naval Base off the coast of the city. Her journey leads her to LJ Silver (sympathetic Brian Rivera), a traitorous consultant hunting for tax breaks of his own.

Outstanding ensemble performances by Michael Gene Sullivan and Andre Amarotico expose corrupt legislators like Feinstein and Pelosi, while making the audience roll with laughter at the absurdity of our dilemma. It turns out housing is affordable, as long as you’re a millionaire!

On Treasure Island, where falsified reports conceal radiation levels 400 times the EPA limit, desperate locals (Sullivan, Amarotico, Keiko Shimosato Carreiro, and Brian Rivera) bring the reality of poverty into focus with the heart-wrenching number “How Will We Survive?”

With skyscrapers tall enough, the rich can avoid the suffering on the streets—but the Mime Troupe brings these stories front and center. With San Francisco’s politicians forcing the poor to walk the plank, we’ll need all hands on deck to fight to reclaim the only home many of us have ever known.