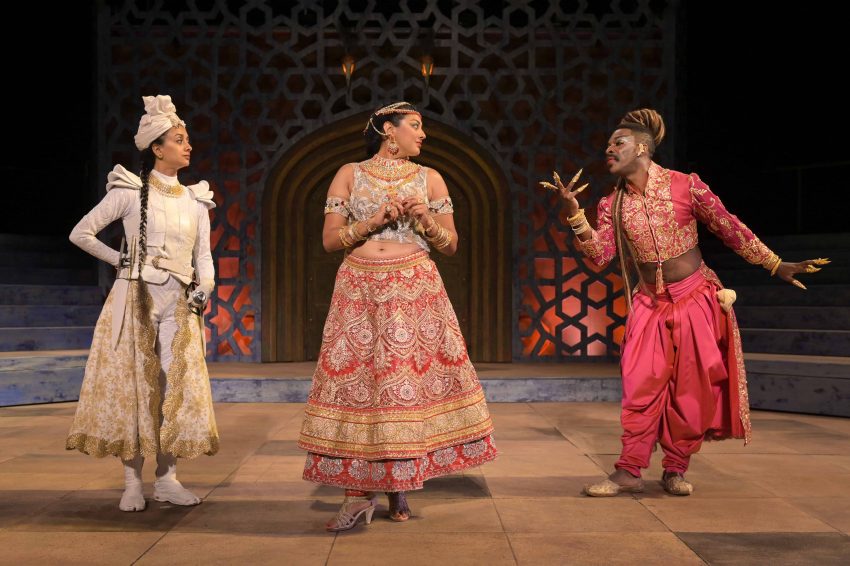 The playwright has constructed a new myth based on herstories of female warriors. When harem guard Hamida (Emma Van Lare) overhears the Emperor beating his youngest wife, Chief Queen Mariyam (Rinabeth Apostol), Hamida vows to help the Queen escape the “House of Joy.” The first brick of lies has fallen.

Hamida’s sympathy for the Queen becomes the catalyst for the women warriors to recognize their own folly. Ultimately, the guards realize they have been hoodwinked, and they conspire against the cruel Trumpean Emperor.

In the Emperor’s exquisite palace, a world to itself, captured young women are brainwashed and trained as fiercely loyal warriors. They forget their origins and become the tyrant’s “willing” pawns, guarding his harem. The ruler uses women to Make the Mughal Empire Great, Again—a useful parable.

In a brilliant performance, Rotimi Agbabiaka plays Salima, the castrated harem master, as he balances ultra-feminine gestures with cutting wit. Robbed of his masculinity, Salima becomes a commanding trans-woman, excelling at court intrigue. He wears bright scarlet robes and gold eyelashes, as a potent and comic eunuch. Salima reveals that the House of Joy is really a House of Pain.

In his role as harem master, Salima bans cucumbers and zucchini—”shapes that are useful ‘down there’”—with a knowing wink to us. Salima plays a flaming drag queen—full of fun, gesturing with his golden talons. The eunuch knows he has been cheated, but his flame burns on.

However, director Megan Sandberg-Zakian’s staging and costuming brilliance cannot pull together the over-flowing story. The production suffers from a lack of tension and drama. Despite moment of genius, the twists and turns of the plot seem jerky and forced, rather than flowing towards a common goal.

After she is killed in battle, Captain of the Guards Gulal (Nandita Shenoy) sees the error of her ways. Returning as a wiser ghost, Gulal tells us that she blindly perpetuated the Emperor’s propaganda. Each person wakes up to her place in the House of Lies.

When Hamida finds love with the sympathetic Dr. Thermometer (Raji Ahsan), she slips back into elitist ideas, reluctant to accept his rise from sewer cleaner. The palace offers not joy, but pain and prejudice against the common people.

It does not take long for us to realize that the joy is more contrived than real. Like the women and the eunuch, we, too, live in an isolated bubble, eyeing every peep from a whimsical Emperor. In a crowded ending, the women are fighting at the gates–they have broken the codes and vows that kept them ignorant. Can we?