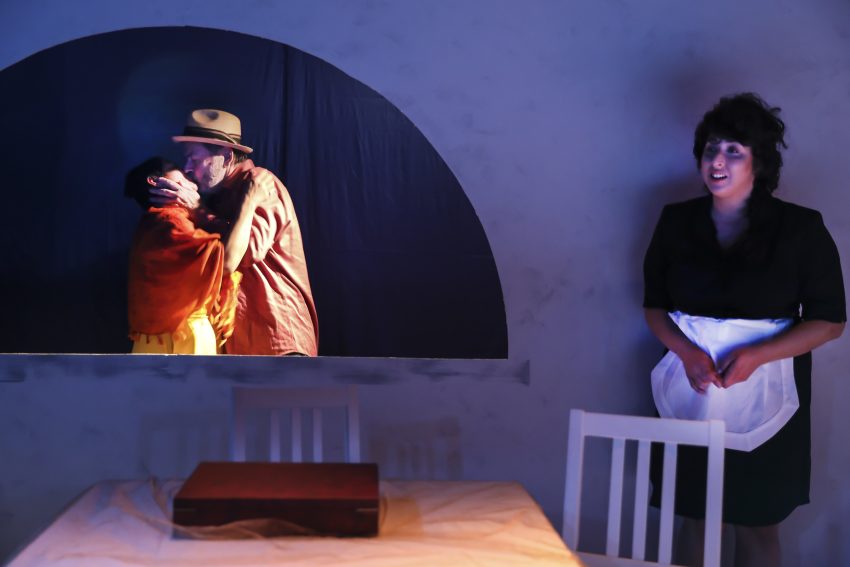 “The Clean house” embodies quintessential elements of a hilarious comedy: A long winded joke in a mysterious foreign language, a depressed maid whose depression stems from her dislike of cleaning, and an up-tight sister versus her generous sister. Sarah Ruhl’s play adds the ravages of random cancer. After all, what’s a dark comedy without a sprinkle of death and existential crisis?

Successful and stern Lane (clinical Marsha Harrison), a high powered surgeon,  insists: “I didn’t go to medical school to clean my own house!” However, her live-in maid Matilde (delightful Janelle Aguirre) refuses to clean Lane’s massive white house. Matilde is constantly distracted by trying to come up with the perfect joke and memories of her native Brazil. Sarah Ruhl pits the wealthy MD. against her maid–a common phenomenon in professional U.S. women’s lives these days. Wealthy woman and poor woman mark the opposite ends of the capitalist social scale.

Matilde’s style of story telling is captivating. She reminds me of my own mother, who would speak of her homeland with a sweet combination of nostalgia and spirituality. Ruhl’s domestic storytelling that stems from longing for a land that is no longer home. “Clean House” perfectly captures the simple things we lose in the process of trying to clean and perfect ourselves. Matilde comes from Brazil, with a rich tradition, and she is subjected to cleaning and perfecting in the Lane’s white, surgical home.

Matilde chronicles her life in Brazil, before both her beloved, funny parents died. Matilde’s parents were known as the funniest couple in Brazil, but they mysteriously both passed on, after telling “the perfect joke.” Matilde takes us into her own whirlwind of Portugese jokes, as she, too, struggles with language to come up with “the perfect joke.” I split my sides sides with laughter at Janelle Aguirre’s comic antics.

Lane’s sister Virginia (whacky Jeanette Sarmiento), embodies her polar opposite: Virginia chooses to be a housewife, rather than a professional woman. Because Virginia has “a barren husband” and no children, she wants to use her free time to clean her sister’s house–and to exercise her Obsessive Compulsive Disorder.

Virginia entices Matilde to secretly let her clean Lane’s house. Virginia and Matilde develop a true sisterly bond as they discover a terrible secret about Lane’s husband Charles (versatile Louis Schilling). Ruhl glorifies sisterhood, even between rich and poor, U.S. and Latin American. The play makes the two cultures complement each other in magical ways.

Charles, a successful surgeon, has broken his doctor’s code and fallen in love with his patient, Ana (passionate Adriana Palhares), another romantic Brazilian. Ana refuses to deal with doctors–she hates hospitals and traditional medicine. Ana lives fearlessly, laughs hard, and loves life. Ana’s glow attracts everyone to her. She embodies the magical and imaginative Latina, spreading love–even in the cold north.

Although we don’t want to side with a cheating husband and his mistress, their love is irresistible. When Charles exclaims, “Ana is my Bashert,” a Yiddish expression meaning his soulmate, how can we disapprove of their love? The presence of Ana brings innovation to Lane and teaches us all empathy and imagination.

Sarah Ruhl has fabricated an elaborate, existential joke about life. We will never know the answer to this puzzle until the curtain comes down on our own personal plays. Bravo for an hilarious and loving comedy to Sarah Ruhl, to all the fine actors, to director Jacqui Herrera! I will never look at a “clean house” the same, again.