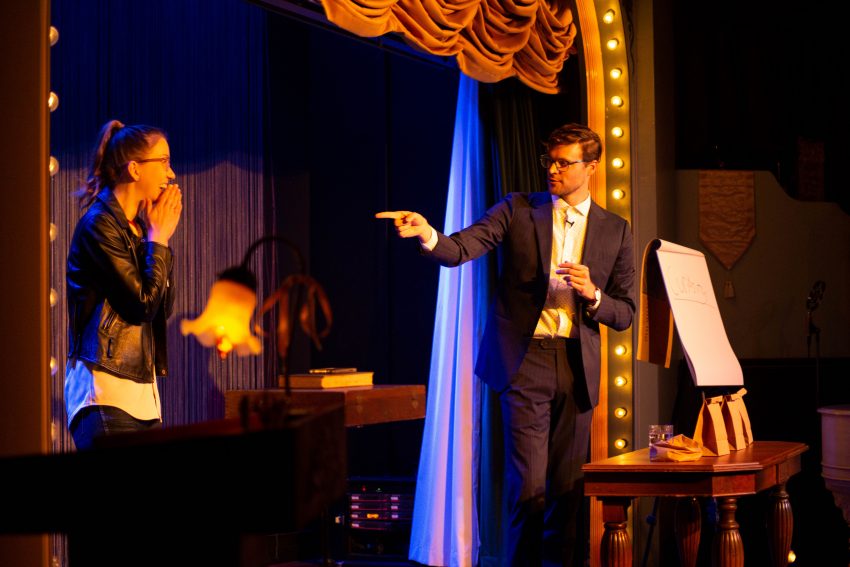 Halfway through the show, Kevin Blake places an envelope onstage; he claims it contains step-by-step breakdowns of all his tricks. He’ll allow anyone in the audience to come up and take it, with the stipulation that they open it after the show, away from the theater, and never shared with anyone.

I’d be lying if I said I didn’t want to take it, and I was halfway out of my seat when a young woman claimed it for herself. I won’t spoil the payoff, but like every magic trick, there is more to the envelope than meets the eye.

Magician Kevin Blake’s mind-boggling show evokes childlike joy. Blake uses the sense of wonder to take us on a journey into his mysteries, which he ominously calls “a tragedy in two acts.”

From the outside Blake is a tall, lanky millennial in a sharp suit, polka-dot dress shirt, and stylish glasses When he steps onstage, the room is his, holding our attention with mastery and grace. His soft voice puts us at ease.

Beyond the magic and illusions, Blake connects with his audience with charm and grace. His clever banter is electrifying as he brings someone onstage, making it easy to trust him. Blake’s flow of humor manages to be both sincere and enchanting. We can all see how much he cares about magic, and his enthusiasm is infectious.

The historic Palace Theater on Broadway in North Beach provides the perfect ambience for a night of intrigue. We enter under the sign of an antique clock repair shop. As we descend into the depths, the décor transports us back to the Roaring Twenties. Tight hallways and hidden doors echo the era of Prohibition and speakeasies. Without a single magic trick, we are thrilled, already, finding our way into a secret spectacle.

The intimate, cabaret-style seating puts us right in front of our magician, daring us to discover the secrets behind Blake’s illusions. Blake brilliantly uses our proximity to his advantage, framing his entire show around the central “tragedy” of every magic performance: our desire to be fooled struggling with our desire to know how he tricks us.

Of course, we all know magic is for kids, right? Sure, a coin behind the ear can fool a five-year-old, but we grown-ups are too mature for silly tricks. But hearing the giddy laughter from an older gentleman as a paper airplane seemingly floats in midair, you could have fooled me. I loved the joy that flows from “Magic Man” and warmly recommend him to you.