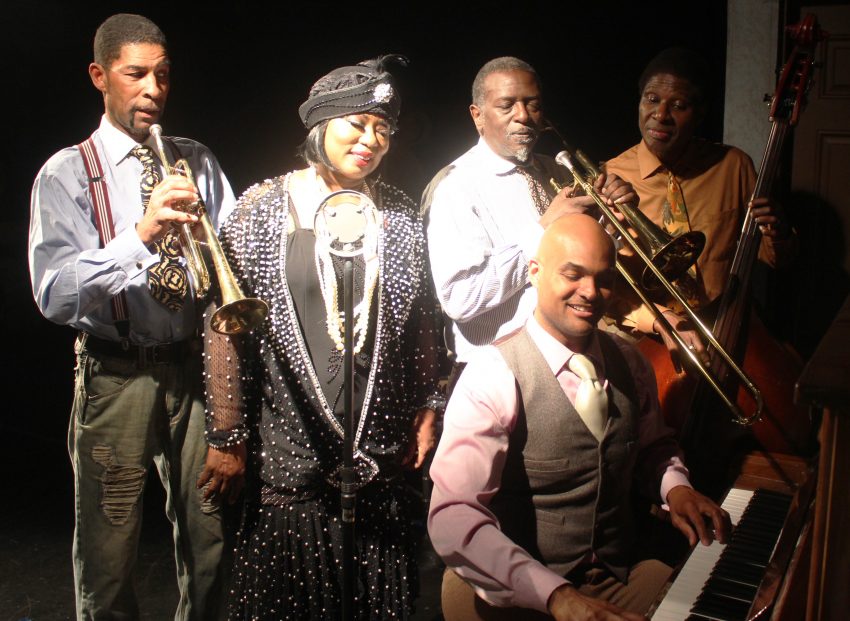 “Ma Rainey’s Black Bottom” burns with suppressed Jazz Age anger: “How to deal with the white man?” Accomplished singer Susie Butler plays  real-life 1920s Ma Rainey, the “Mother of the Blues.”  Butler showing us how a powerful Black singer could exert power over white record producers—at least until they capture her songs on wax. When Butler sings, everyone pays attention.

Legendary playwright August Wilson also brings us the four talented Black musicians in Ma Rainey’s band. All four have been ground down by the white man, but one takes out his anger out on his band mates. They all live on crumbs from the white producer’s table.

Self-absorbed, aspiring Levee (sympathetic Nathaniel Montgomery), a talented trumpeter, burns with talent and drive. Levee wants to form his own band, to surpass Ma Rainey’s old-time music.  Montgomery shows us a frustrated, feisty Levee, making a big fuss when another musician scuffs his new shoes. Levee dramatically displaces his rage onto his friends.

The band members criticize Levee for “shuffling” and saying “yassir” to the white bosses: Mel (aloof Joseph Walters), and Irvin (sympathetic Ric Wenzel). Levee needs them, so he can “update” the Blues for white record buyers.

Ma Rainey knows that the white producers don’t care about her. So, she brings along her nephew Sylvester (intense Alex Loi) and her gal Dussie Mae (shimmering Kyla Kinner) to assert her power, wonderfully. Ma uses her stammering nephew and her sexy young girlfriend to manipulate the boss. They become her revenge, and Loi and Kinner play it up, deliciously.

The problem with MET’s “Ma Rainey” lies in the pacing. While the scenes with the band telling their stories are engaging and sparks fly, the studio scenes slow the show down. We need a swifter pace to make this August Wilson gem sparkle.

When Ma Rainey exerts her power over the white authorities, underlining the boss versus musician conflict, there’s fun and a righteous comeuppance. We know the boss won’t treat her right, or bring her a coke, again. But we relish the story of the Blues and Susie Butler’s mastery of Ma Rainey’s unique genius.

Wise, patient Toledo brilliantly expresses his understanding of Black people as “leftovers,” but who listens to prophets?

Congratulations to the actors, and thanks for letting us feel the decades it took for Black culture and music to be appreciated in this world of worker exploitation.