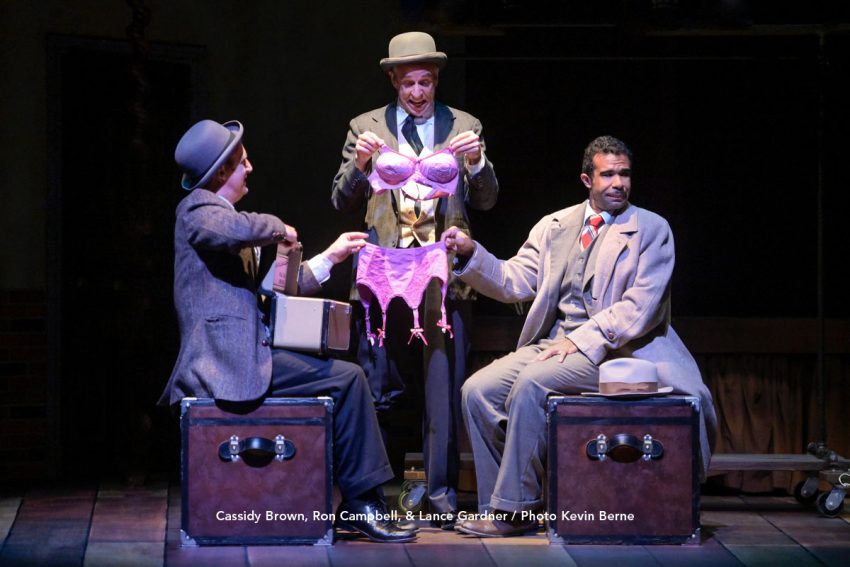 After a night out in an London musical hall in 1935, a banal Englishman, Richard Hannay (elegant Lance Gardner), meets a mysterious, soon-to-be-murdered German woman. In the satirical and comic “The 39 Steps,” which spoofs the Hitchcock movie, Hannay is soon accused of her murder.

Scenic Designer David Lee Cuthbert strikes brilliant magical notes—a giant clock turns into a Christmas ornament and a villain meets his doom in a gun brawl. Oh! a puppet falls to his death, while a Nazi has an evil plan. Magic is everywhere: A ladder transforms itself into a train, mops become spies in trench coats, and the clock changes into the moon!

Director Leslie Martinson offers us the opportunity to travel back in time to a 1930s European mystery. “The 39 Steps” draws us in by constantly surprising and activating our imaginations. In that Cockney Music Hall, under the watchful eye of the emcee (witty Ron Campbell), Hannay watches Mr. Memory, an illusionist, superbly played by sprightly Cassidy Brown. Mr. Memory’s amazing mental powers find answers to obscure, funny questions, making us giggly.

An audience member asks Mr. Memory: “Who won the Cup in 1926?” Mr. Memory starts gesturing and moving his hands around, to show he’s thinking deeply. He points a finger in the air, swoops it down, then sweepsleft and right in a rectangular fashion. He replies: “The Tottenham Hotspurs won the cup in 1926 . . . in the presence of His Majesty King George the Fifth.” Brown’s enthusiastic silliness prepares us for what follows. 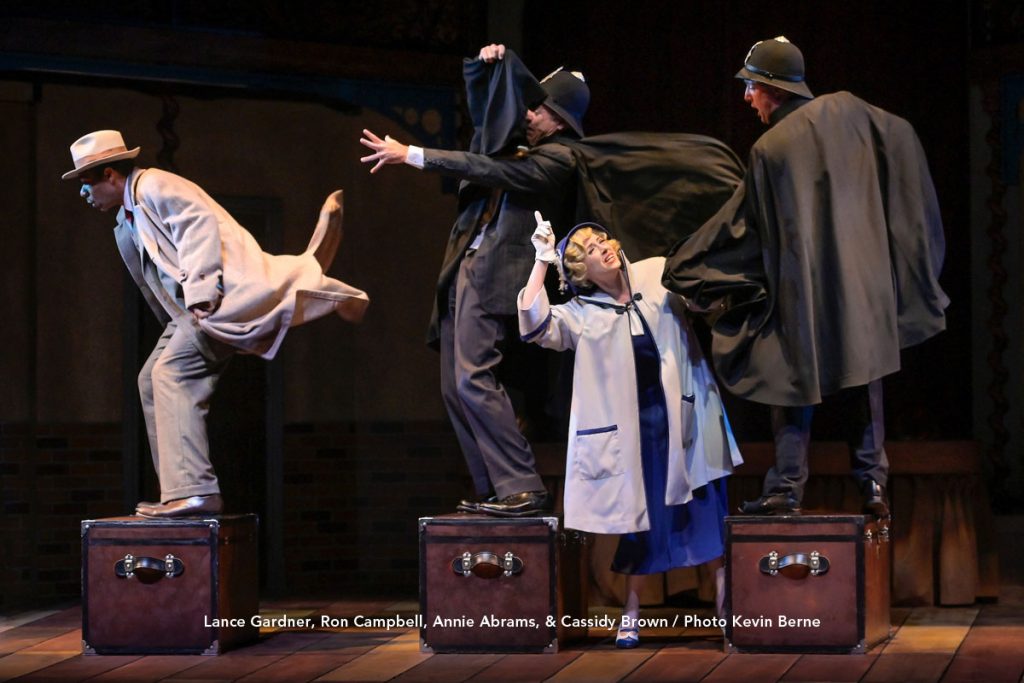 At the music hall, a fight breaks out and German Fräulein Annabella Schmidt (seductive Annie Abrams) takes refuge in the Englishman’s flat. “The 39 Steps” goes from comedy to soap opera in a few seconds!

The chic Schmidt confides that she caused the fight in the music hall. She refuses to disclose more details because then, Hennay would “BEE COME inFOLVED!” Her thick German accent leaves us laughing. Oddities of language play a big role in “The 39 Steps.” 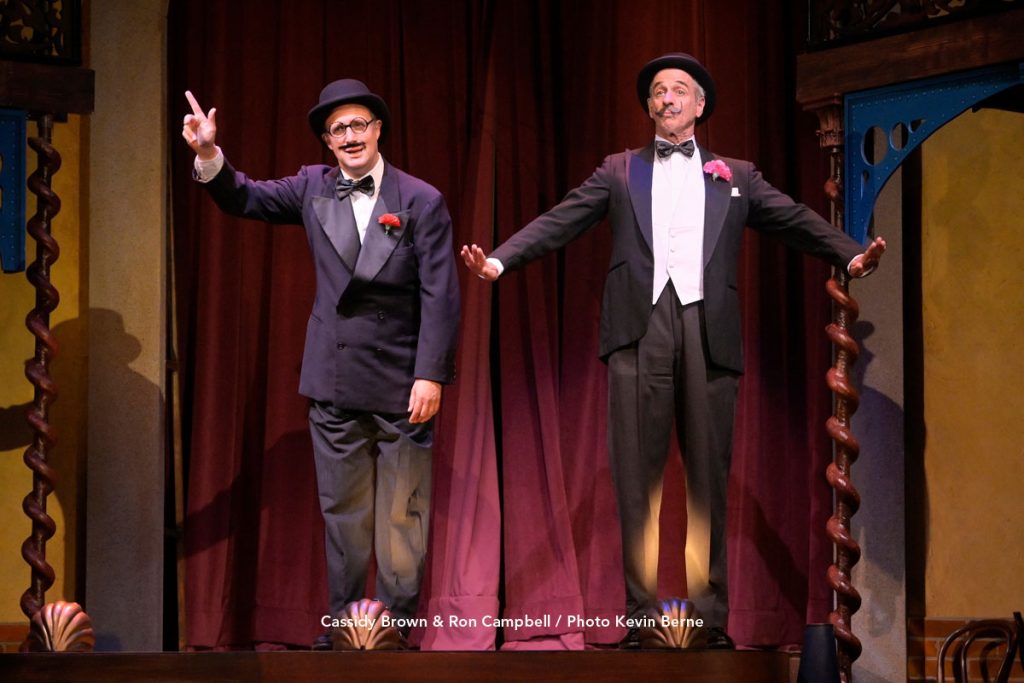 All four letter-perfect actors shift flawlessly from one role to another: conductors turn into passengers, passengers into policemen, and uniforms into people. Each actor plays multiple characters in the blink of an eye, while being outrageously funny with quick changes and quirky props.

If you’re looking for magic realism, brilliant acting, and a drama involving foreign intelligence agents, you have found the right comic masterpiece. 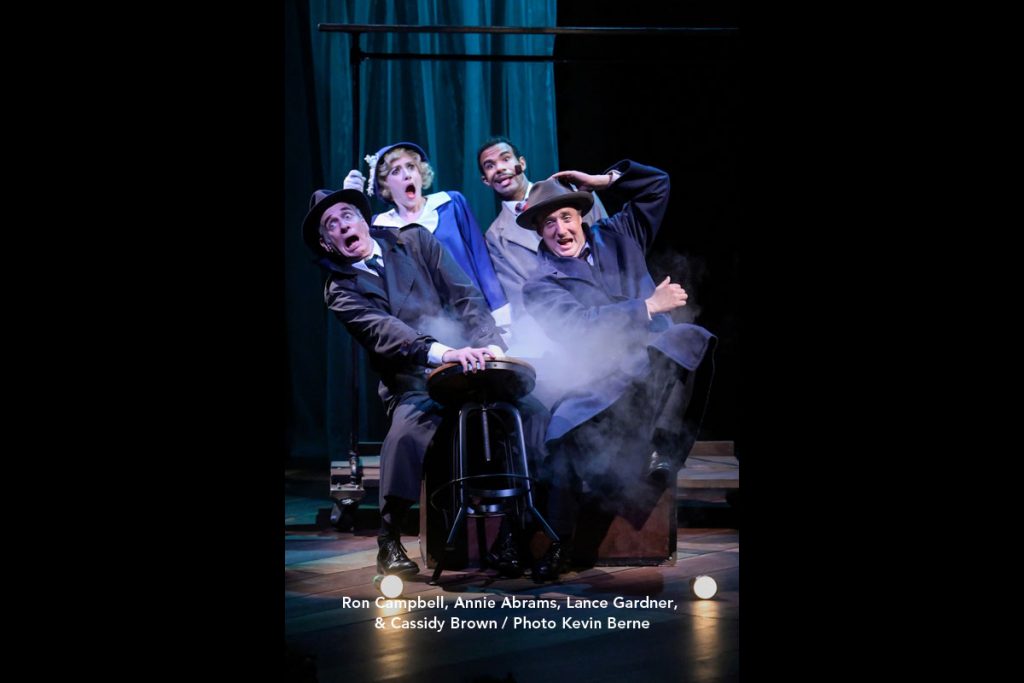 “The 39 Steps”—adapted by Patrick Barlow, from the novel by John Buchan, from the movie of Alfred Hitchcock, directed by Leslie Martinson, scenic design by David Lee Cuthbert, at TheatreWorks, Silicon Valley, Mountain View, California, through Sunday, September 15, 2019. Info: theatreworks.org