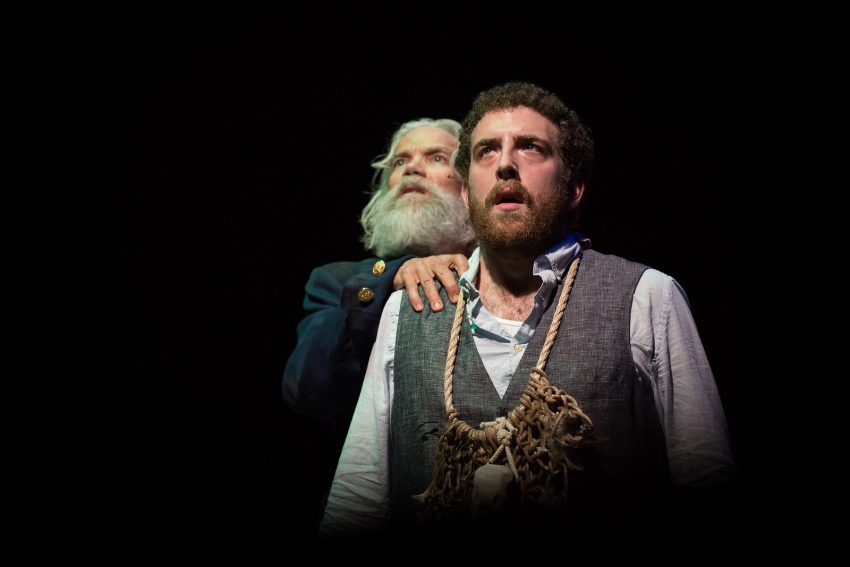 A contemporary environmentalist easily sees the logic of Samuel Taylor Coleridge’s poem, “The Rime of the Ancient Mariner.” A cursed Mariner has killed an Albatross, and must wear its corpse around his neck, forever. The sea wreaks havoc on the ship’s crew, just as the Earth now lashes back with wildfires, extreme heat, and violent hurricanes.

Word for Word’s symbolic connection between the poem and our current climate crisis hangs in the lobby: a big blue ocean map disfigured with plastic waste and netting. Entering Z Space, a ship fills the huge, oceanic space.

Oliver DiCicco’s magnificent design puts us into the interior skeleton of a massive ship, which also resembles the rib cage of a giant whale.  Ropes drape from the ceiling; performers lean and gently swing on them, adding wave-like motion to the boat on the sea. When the ropes are pulled up to the ceiling, their retreating shapes suggest tentacles of a giant squid.

Over the course of a crisp 50-minute run,  nine cast members perform “The Rime of the Ancient Mariner,” word for word, as promised by this internationally famed group. We are transported to a magical realm by swirling aquatic lightsand mystical “OOOOOO’s” echoing over oceanic stillness.

The poem itself is mysterious and unsettling, with elements of horror embedded in the folktale.. It’s almost as if it were written by a Shakespearean pirate. Does Word for Word’s staging help my understanding of what’s unfolding through the old-fashioned language? …Yes, but only bit by bit.

Nevertheless, the visuals are quite entrancing. Ray Oppenheimer’s lights shimmer like the reflection of sunlight on a swimming pool, aquatic and mystical. At one moment, flecks of light swim through the dark stage, like sickly bacteria, plankton, or stars in the Milky Way. We are on a great ship, sailing to a supernatural world.

The sea-worthy cast exudes excellence. Charles Shaw Robinson is unforgettable as the Ancient Mariner, with long, slicked-back grey hair and a dusty long jacket. Robinson wears a large wooden backpack with a sandy hourglass hanging out.  He is eerily familiar, conjuring up every pirate I’ve imagined as well as every homeless person I’ve ever encountered. The two archetypes strike a chord in besieged San Francisco—sharing danger, horror, and injustice.

The Bride, the Moon, and the Albatross are all played by shimmering Patricia Silver, dressed in silky white. Angelic and haunting, Silver descends with operatic echoes and shimmering lights. Time stops as she moves.

Coleridge expresses the fickleness and the bitterness of life on the sea, which is “slimy” and sickly green. His description fits our current oceans, corrupted by pollution and waste.

As young people, inspired by Greta Thunberg, take to the streets to demand action against climate change, Word for Word’s production lacks concrete contemporary references that will incite change.

But, the one-hour voyage on Coleridge’s legendary ship lasts long enough to keep our interest afloat and raise our hopes.

“The Rime of the Ancient Mariner” by Samuel Taylor Coleridge, by Word for Word, at Z Space, San Francisco, through Saturday, October 12, 2019. Info: zspace.org