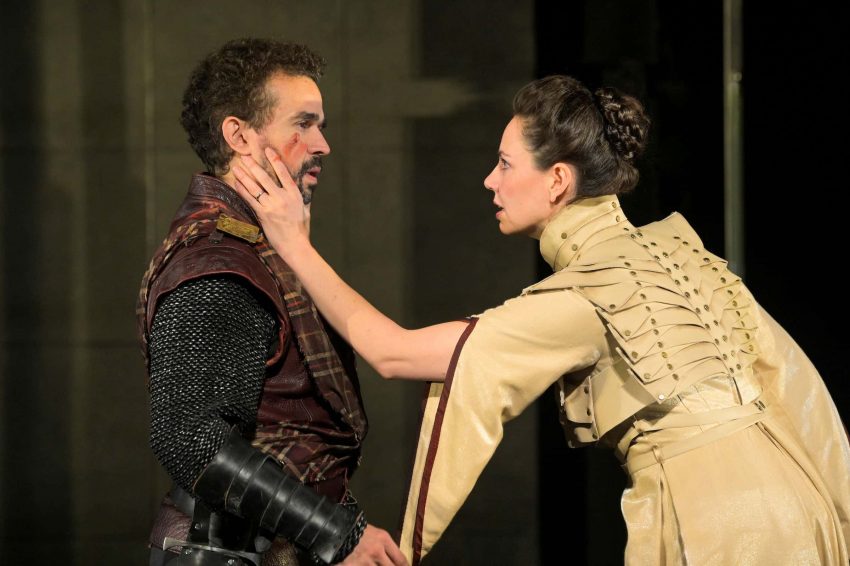 Director Victor Malana Maog creates a unique visual experience as we watch Macbeth sacrifice his honor and scruples for unbridled ambition. Scenic Designer Adam Rigg has built an erector set of shiny chrome scaffolding with reflecting plexiglass panels and flashing lights, an eerie maze where actors amble. The plexiglass is my favorite part of the show—buckets of blood splash against windows, offering fabulous patterns of trickling ooze. Macbeth, Banquo, Duncan all smash against the panels while their hands slide slowly down the blood and glass.

These cool effects and a few bright spots make this satisfactory production a little more tolerable, but I was hoping to better explore the answer to Shakespeare’s central question: how do things spin out of control so quickly? Given today’s politics, I ask myself this question constantly and am left shaking my head.

So how does a beloved, loyal, and noble warrior like Macbeth get talked into such horrible acts by mere suggestions from his wife? I’ve been suggesting for years that it’s possible for someone else to take out the trash, and I have yet to get any takers. I guess if you throw in raw ambition, three spooky witches, and a complicit wife, you get treachery of the highest order.

The three witches who prophesy Macbeth’s bloody rise to power drift on unnervingly. Played in turn by other actors, the witches create a haunting presence with blue lace draped over their costumes. While kind of spooky, they are a missed opportunity for Costume Designer Melissa Torchia, who seems to favor ease and quick costume changes over a truly scary presentation. However, Elizabeth Rhodes sound design provides truly creepy voices to scare us.

The cast offers both highlights and lowlights. Cal Shakes has assembled a solid selection of talented actors from stage and screen. Rey Lucas’ Macbeth is respectable; he commands the proud, self-assured soldier and a man losing his mind equally adroitly. Liz Sklar plays the sinister Lady Macbeth; she starts slowly, but ramps up quickly to deliver the aggressive, power-mad killer we expect.

Macbeth’s bloody fight scenes require a high level of stage fighting talent; but unfortunately, this cast did not rise to the occasion. Too many awkward grunts for my taste.

My favorite performances are Jomar Tagatac’s Banquo and Warren David Keith’s Porter at the gate. Tagatac exhibits tremendous ease and grace with Shakespeare’s words, as well as a  steadfast stage presence. Tagatac’s facial expressions when he suspects Macbeth’s betrayal is spot on.

Warren David Keith, whose extensive credits range from some of the best Shakespeare productions in the Bay Area to a role in the recent film The Last Black Man in San Francisco, makes a unique comedy contribution. Since  the drunken, slovenly Porter’s lines are some of Shakespeare’s comedic best, Keith is visually and tonally uproarious, doing justice to great language.

To be honest, I’ve always found Macbeth a bit over the top—too many outlandish turns in two hours. But that said, whether it’s your first or your tenth Macbeth, Cal Shakes 2019 production delivers the goods: things go terribly wrong when we combine weakness, narcissism, greed, and a little opportunity.