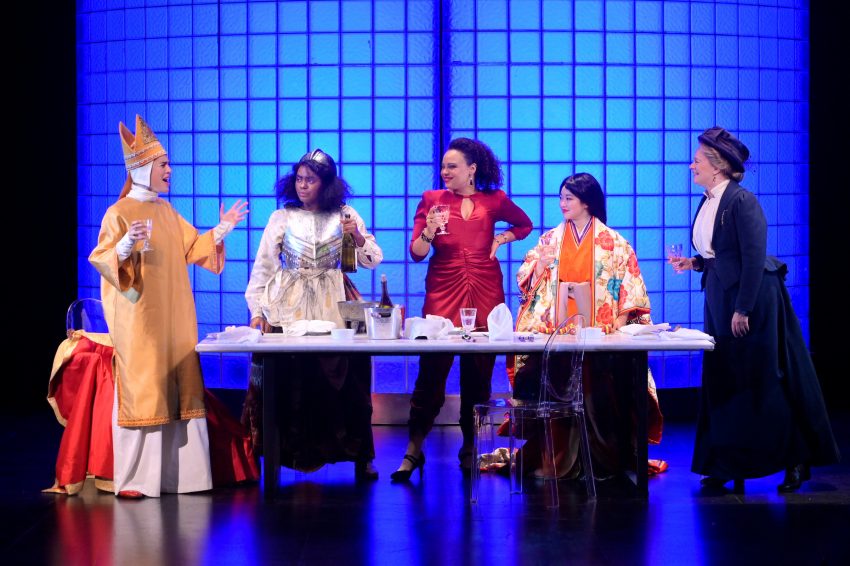 A hard realization for a devoted “pull yourself up by the bootstraps” conservative Thatcherite. Fast forward to 2019, where the working class is still under attack.

By the end of “Top Girls” (1982), Caryl Churchill brings us a dream-like dinner party, a witty workplace comedy, and a classic kitchen-sink drama for the finale. All the while, the bonds of the patriarchy and the conservative politics of Margaret Thatcher’s Britain loom ominously onstage.

Fierce Marlene (deft Michelle Beck), an 80s British businesswoman in a bright red dress, at the top of her game, welcomes her diverse guests.  At first, we cheer for her success and promotion over a man, but later wince at her elitist and self-centered Tory politics.

Brilliant scenic designer Nina Ball transports us gracefully and with style from the surreal to the realistic. We see an imposing marble dining table set for six, backlit by Ball’s impressively huge glass brick façade. In this modern, abstract space, Marlene has dreamed up a murderer’s row of spectacular women from history.

While it seems Marlene admires these women, she cannot always hide her condescension, particularly when comparing her modern insights to the women from more conservative eras.

Each of these international superstars has crossed time and space to compare notes about their lives as groundbreaking women. Churchill leaves it to us to decide whether the women’s conversations confirm Marlene’s “lean in” brand of feminism. Each woman wears stunning period costumes by inventive Sarita Fellows.

We meet renowned Victorian world traveler Isabella Bird (amusing Julia McNeal), who regales us with tales her expeditions to the Rocky Mountains and Morocco.

Next, soft spoken but iron-willed thirteenth-century Japanese concubine and, later Buddhist nun, Lady Nijo (powerful Monica Lin) stuns us with her gorgeous kimono. Her stories of oppression and loss of her children are heartbreaking.

Pope Joan (heavenly Rosie Hallett) drapes her golden robe with magnificent red silk lining over here chair and, like a good preacher, Hallett gives her the power to mesmerize us. We recognize Joan as a literal model of a woman who invades the patriarchy to get ahead.

Finally, Patient Griselda (elegant Monique Hafen Adams) arrives, whose dark tale of manipulation by a cruel prince shocks the women. A literary legend, Griselda insists she was only being tested. The sisterhood falls silent in horror.

In Part Two, the scene changes suddenly to a sleek upscale office space–it’s the executive placement office called Top Girls. There, the same women appear as top flight headhunters who get women top jobs. In that troubling 80s world, we meet Marlene’s troubled teenaged niece Angie (compelling Gabriella Momah). Angie lives in the country, under the care of Marlene’s sister, Joyce (moving Nafeesa Monroe). But the teen is struggling in school, and schemes with her friend Kit (delightful Lily D. Harris) about running away. She turns up in Auntie Marlene’s office–at Top Girls Agency.

In the third scene, Nina Ball has constructed a totally new set–sister Joyce’s cluttered, crowded country cottage–that rolls out to us, menacingly. Here, in the realistic setting, Churchill unravels the hypocrisy of elitist feminism, as the sisters debate class politics. In a scene that could be taken straight out of Fox News, city woman Marlene chastises stay-at-home Joyce for labeling politics as “Us vs. Them.” Their argument escalates superbly from there: don’t miss it!

Joyce stands up for working class women.  Marlene defends her cold, self-centered point of view. While we moralize about the downfall of decency in politics, Churchill’s “Top Girls” shows us two women irreparably split by their opposing political ideologies.