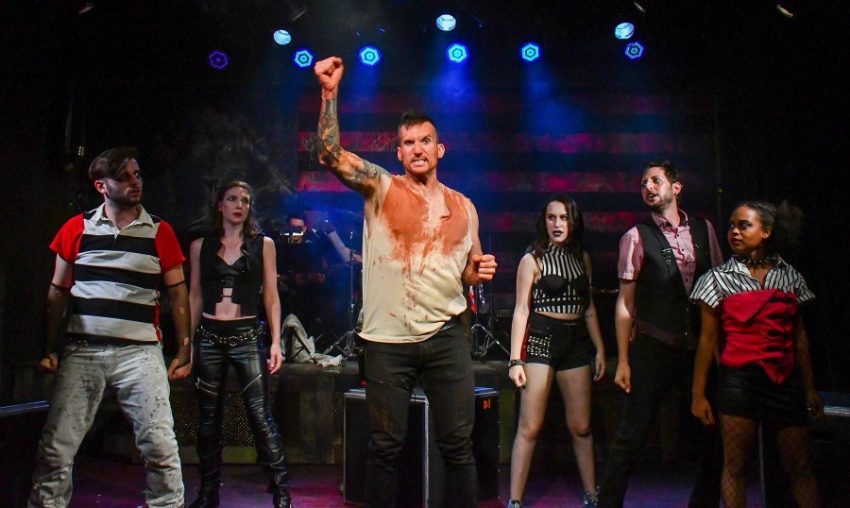 As Andrew Jackson (ferocious James Grady) rises from frontiersman, to general, to governor, and eventually president, we see his journey from unruly upstart to anxiety-ridden leader. We find out that populism is a great way to win elections but a terrible way to run a country. Sound familiar?

The set looks like we’ve stumbled into an underground punk concert, with bulky band cases littered onstage, and a huge, grungy American flag painted on the back wall. Haze pours in as the band takes centerstage, led by rocking drummer Armando Fox. Lights up—the band starts a rowdy set and adrenaline takes over. 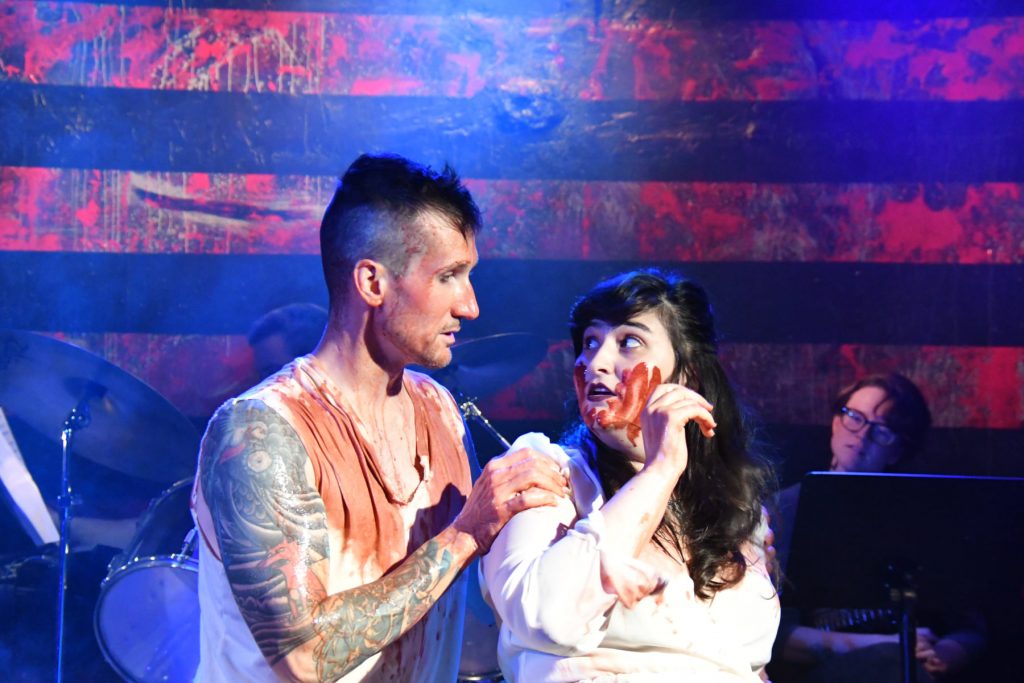 James Grady is magnetic as the titular frontiersman turned politician. With the rock star charisma of Panic! at the Disco frontman Brendon Urie, Grady’s angry Andrew Jackson believes the world is out to get him.  Jackson acts like whiny toddler, while others see him as a bloodthirsty megalomaniac—talented Grady skillfully makes us laugh and recoil.

“Bloody Bloody” reminds us forcefully of the parallel between Jackson’s destruction of Native Americans and the torturing of immigrants at our border, today. Once more, we see an egotistical leader scapegoating an entire people for his political gain.

At times, Grady imbues Jackson with flashes of remorse, but they soon fade to rage and violence. 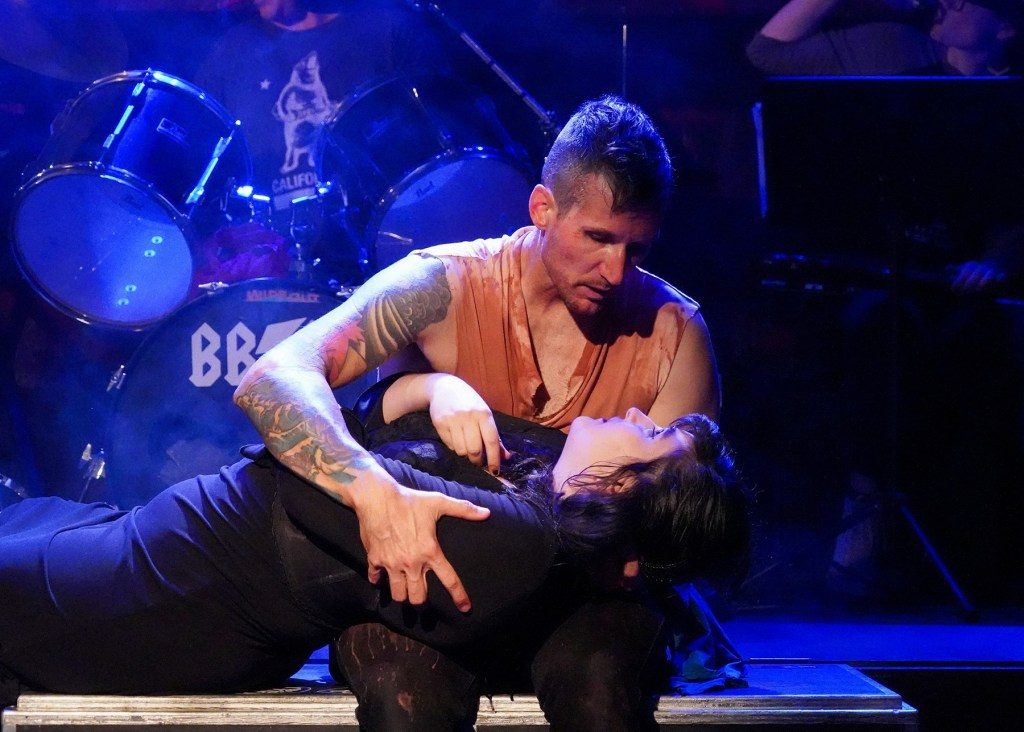 When a nerdy teenager (hilarious Teri Whipple) tries to serve as our narrator, she meets a violent end at the hands of Andrew “I don’t need a fucking narrator” Jackson. The in your face, anachronistic staging promote uproarious narcissism and preening. Jackson’s party knows that killing Native Americans and taking their land is wrong, but they really want it—so who cares? That’s Manifest Destiny, Baby!

Along the way, Jackson’s list of enemies keeps getting longer. There’s the British, the Spaniards, and of course, the Indians, but he most despises “the big city elite.” Jackson wages a one-man war against pompous James Monroe (charismatic Rae Cofsky) and dim-witted John Quincy Adams (hysterical Gabriel J. Thomas). 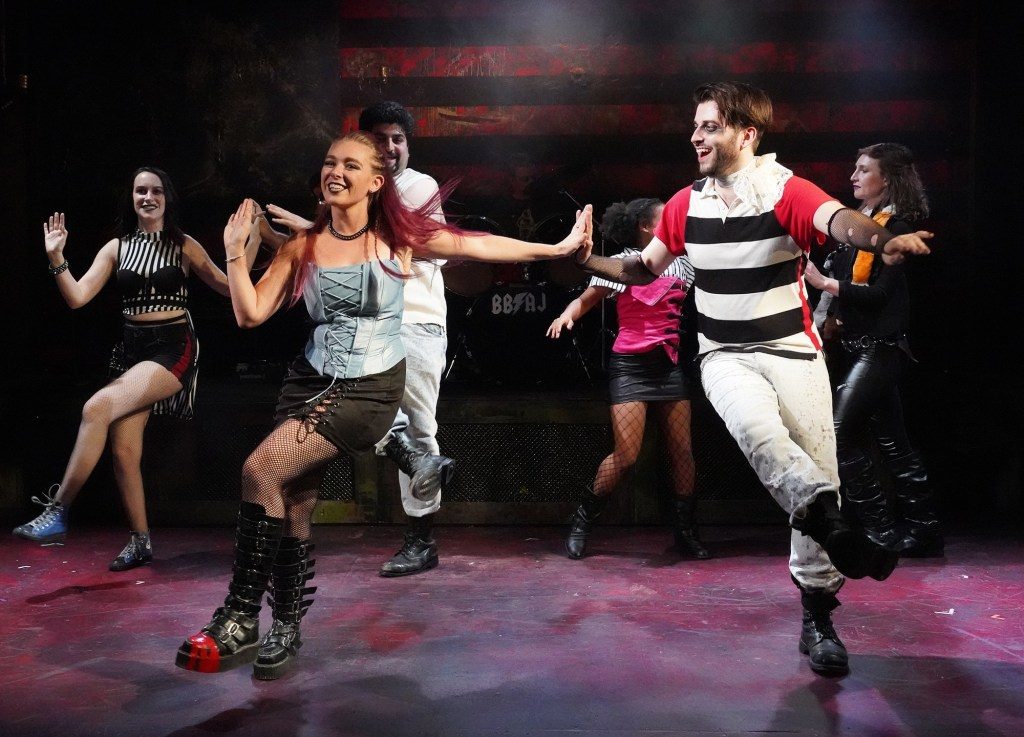 In its final moments, “Bloody Bloody Andrew Jackson” zooms out to examine the modern legacy of populism and forced removal of Native Americans. Why do we do it? Director Brian Katz uses punk rock to dismantle racist imperialism, baring the corrupt heart of a nation. Worth seeing twice—next time I’ll be throwing on some eyeliner and a spiked choker.