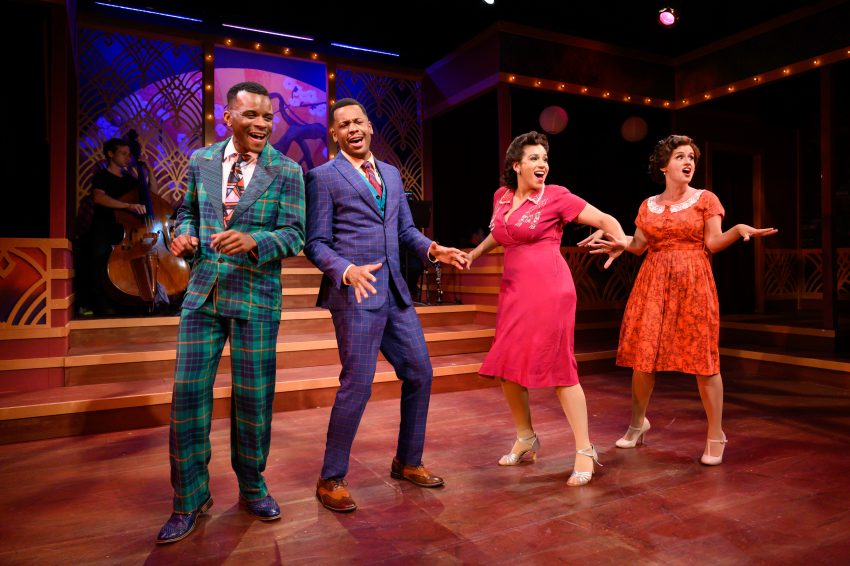 Described by its stage director, Jeffrey Polk as “two hours of fun, quirky, message-free entertainment,” 42nd Street Moon’s production of “Hot Mikado” lives up to its billing of pure relaxation. We come out invigorated by the boundless energy of the cast, the bright colors of the 40s costumes, humor in the lyrics and inventive melodies.  “Hot Mikado” has no bigger point than our having a good time.  Overcome with the cheerfulness of the cast, we can ignore how dated the operetta’s take on Japan may sound, today.

The cast is up to the task, playing up the antics to the hilt. The music, tinged by the big band sound of the 40s, ranges from melancholy ballads (a touching lament by Michelle Ianiro as Katisha) to big band and gospel tunes by the ensemble of fourteen, to humorous romps. As Yum-Yum, Lucca Troutman shines, especially singing her “The Sun and I” tune.

Jaron Vesely hams it up as Ko-Ko with precious comic timing. His hilarious “I’ve got a little list” includes shooting the pianist, twice for good measure. Kelly Houston, in his deep baritone, manages to impart both ridicule and gravitas to Poo-Bah.

As Nanki-Poo, Jean-Paul Jones exudes a charming nonchalance. As the Mikado, Branden Noel Thomas enters late in the second act, but does a great job of it. Thomas is imposing as befits an emperor, but with a twinkle in his eye.

In 1939, “Hot Mikado” adapted Gilbert and Sullivan into a jazz orchestration, adding “Hot” to the title. Although those arrangements were lost, in 1986 David H. Bell (book and lyrics) and Rob Bowman (orchestrations and arrangements) created this new version.

Set in a fictional Japan that reflects some exotic Orientalism, the characters sport rather offensive names, by today’s standards, and behave ridiculously. Yum-Yum (seductive Lucca Troutman) bears a name that is neither Japanese, nor dignified. Neither is Pooh-bah (unfazed Kelly Houston), but at least his name has made its way into the dictionary.

42nd Street Moon’s “Hot Mikado” deflects any potential criticism of racial or cultural insensibility by playing up the zaniness of the show. Director Polk plays up the fun and keeps a safe distance from any serious questions. Several times, characters wonder why the documents they read on stage are written in Japanese. “Oh, that’s because we’re in Japan,” they wink, breaking the fourth wall.

The inconsequential story recalls “The Barber of Seville”: the young ward, Yum-Yum, is destined to marry her  guardian Ko-Ko. But Yum-Yum would rather marry the charming Nanki-Poo (smooth Jean-Paul Jones), who is hiding his true identity and noble birth.

The story has more turns than Lombard street and begs for suspension of disbelief. But it touches us when Nanki-Poo joins with Yum-Yum in a lovely duet—”This is what I’ll never do”—showing off real chemistry. It’s as though love is, for a fleeting instant, the only thing we can take seriously.