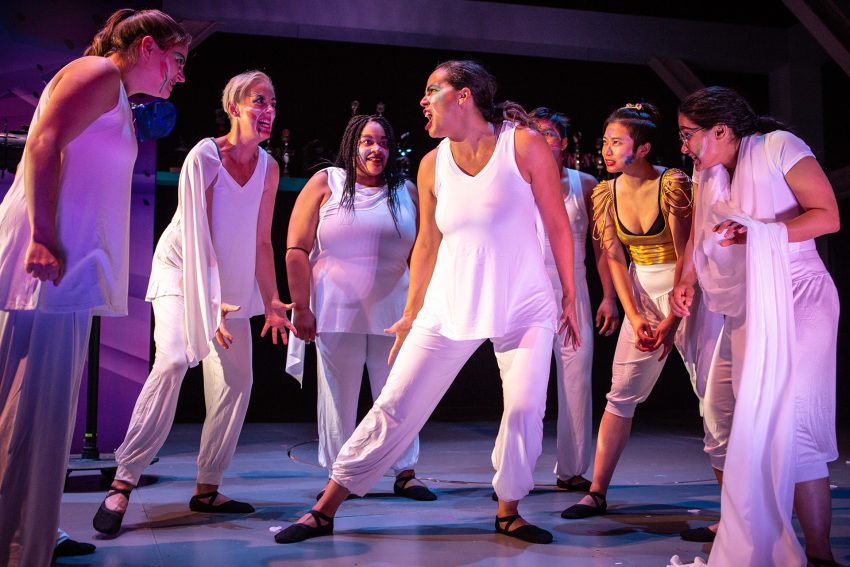 In “Dance Nation,” Clare Barron presents an intriguing yet violent tribute to puberty and the dramatic lives of six 13-year old girls (and one boy), as they attempt to dance their way through their problems. Interestingly, Barron’s script insists that actresses of all ages be cast, and director Becca Wolff avoids having the women act like girls. Instead, the women bring a unique, adult perspective to the teenagers’ feelings and actions.

The girls present their struggles with sexuality and personal identity through a series of loosely connected monologues and scenes. While these monologues let the actors show off their talents, the sudden deviations from the main plot interrupt our focus, breaking the flow of the action. The disjointed quality keeps the play from developing because we are forced to piece together a nonexistent plot line from independent scenes.

Ashlee (electrifying Lauren Spencer) pierces through the fragmented “Dance Nation” like a bolt of lightning. Dominating the stage, Ashlee breaks into a monologue about pushing against the grain and accepting her own beauty. The tension builds until Ashlee shakes with pure sexual energy and desire. She reaches the climax of her speech, and suddenly stops, fearing the intensity of her emotions. “What am I going to do with all this power?” she asks us, as she steps back into the line of other girls.

Spencer’s intensity grips us, and we hang onto her every word. She is unapologetic, fervent, and truthful. Why do we have to deny that we are beautiful—or intelligent?

Barron’s biggest success comes with the eccentric Maeve (wholehearted Julia Brothers), the youngest of the pack, who is often lost behind the more commanding girls. She represents childhood creativity and by the end of her speech, has transformed from a twitchy 12-year-old girl into the woman she will become.

Maeve believes that she can fly. She says flying is “probably the coolest thing [she] ever did, and [she] forgot”— as she grew up. Brothers gorgeously conveys the strong sense of loss that comes with the realization that as you grow up, you leave behind a precious version of yourself.

I find myself thinking about these two moments as I go about my day, and I wish that the rest of the actors had used the same gripping honesty.

While I enjoyed Barron’s insights into the teenage years, “Dance Nation,” as a whole, fails to move me because it does not create a convincing dramatic arc. The intensity and honesty provided by Ashlee and Maeve starkly contrast with the other girls’ rather bland stories.  They left me craving more emotional depth. “Dance Nation” provides exciting scenes—but we want more of them.