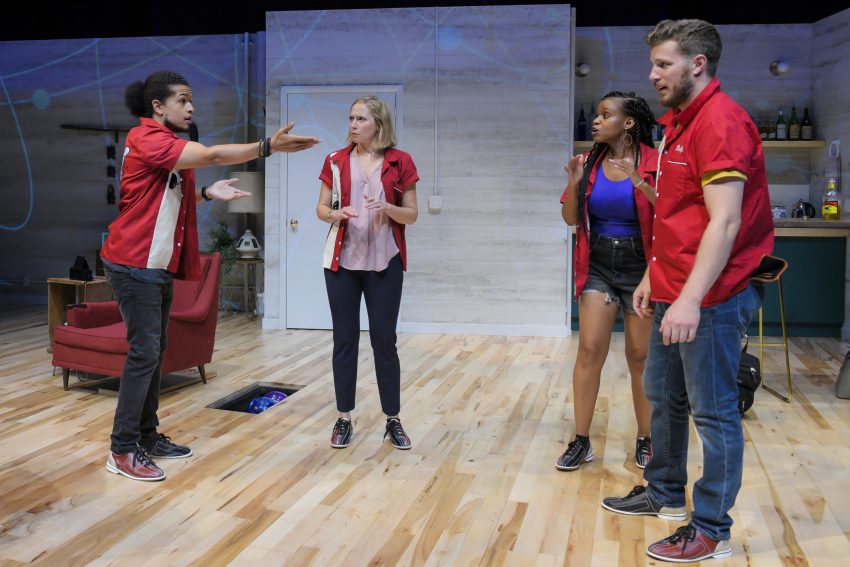 Looking for a dramatic meditation on what it’s like to be a millennial black guy or gal in these days in the good ol’ U.S. of A.? Then the accomplished and brilliant Suzan-Lori Parks has “White Noise” for all of us who make up the background sound.

Parks gives us two witty, fast-talking, devoted young couples—in their separate apartments—decorated with tools and modern furniture. The four college friends, bowling buddies, live out the terrors of a 40-day Master-Slave contract between warm-hearted Leo (sensitive Chris Herbie Holland) and cool Ralph (stalwart Nick Dillenberg).  What happens between the four friends provides comedy, horror, and astonishment—there’s no getting away from the White Noise that rules the lives of these charming, funny young Americans.

White Noise is that reassuring hum in the background that lets us dream. Parks’ anxious artist Leo has floated through school and college, but he’s had insomnia since he was five years old. Is it because he’s Black?

Out on a long walk one sleepless night, he is thrown to the ground by a cop—a Black man in the wrong place gets beat up.

Now, he wants a peculiar kind of revenge—upon himself. He wants protection, he wants to feel safe. As an official slave, protected by his bud Ralph–with documents to prove it—maybe he can get some sleep?

Ralph, who has money through his father’s chain of bowling alleys, gets into the Master role. He finds a bizarre torture collar for Leo. Leo moves in with Ralph, and Misha and Dawn hang out at the other apartment—with surprising developments. All four of them have soliloquies when they explain who they are—talking directly to US.

As the 40 days count down, with sex, race, and white supremacy bursting out, the showdown comes in the bowling alley. While Leo’s scores are flashed on the wall, Master and Slave battle it out, by rolling balls and falling pins, wonderfully staged.

Leo is a heroic bowler, and Suzan-Lori Parks brings her poetic powers to the last day of his contractual slavery.

There is so much fun here—seeing “White Noise,” puts a buzz in our heads, making us consider what slavery means and how it persists. In the daily life of a loveable, long-suffering, young man like Leo, sleep and rest and creative urges have been squelched by history and pain.

Will Leo find a way to escape that damned White Noise that follows him around—or are we all doomed to repeat his horrific history, buzzing in the US backdrop? “White Noise” is funny, sophisticated, and prophetic. Suzan-Lori Parks defines today’s New Slavery. I’m on my way to see it, again.

If you are interested in other plays with Queer themes, try: Queertheater.com