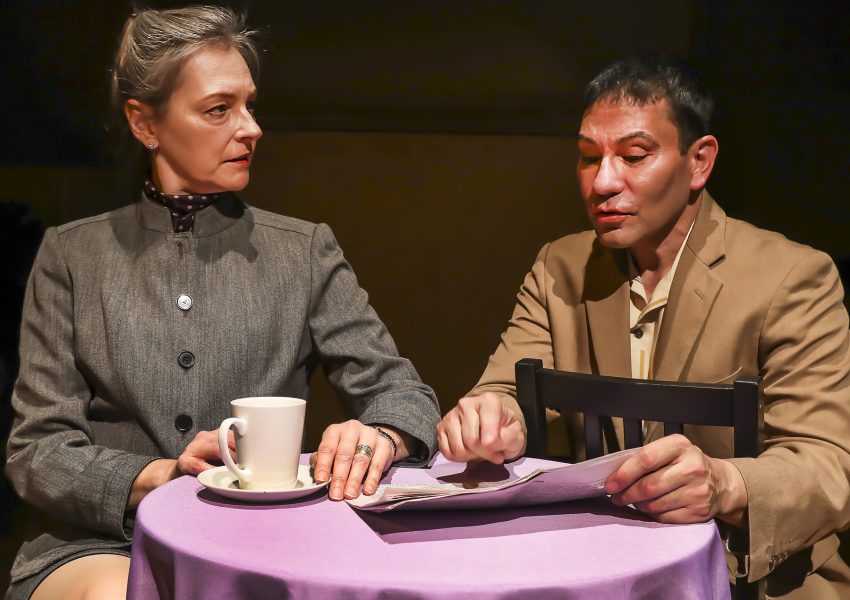 In the tradition of Grand Hotel, but with a strong Latin twist, “The Lady Matador’s Hotel” by Cristina Garcia–adapted from her novel, takes on the fundamental issues of birth and death–confronting glory and honor.

Central Works, in the beautiful Berkeley City Club, is so intimate you can see the audience’s faces across the room. Actors enter and exit through three doors, spreading the action around us.  In one clever scene, director Gary Graves throws his actors’ shadows over the mantel, and the Lady Matador’s Hotel springs to life.

And what a cast they are: An anxious young Native waitress; a handsome young Latin waiter pursuing her; and the grand bull-fighting Lady Matador, herself–a dauntingly assertive woman.

The superb Rudy Guerrero plays Ricardo, the would be poet-father, touchingly.  Guerrero also plays Pajarita, a wacky woman astrologer, decked out in turbans, sequins, and multi- colored caftans.  Guerrero is priceless in his many-gendered disguises.

But Ricardo is thwarted by a freeze on international adoptions and the prejudice of harsh U.S. adoption lawyer Gertrudis Stüber, played with élan by Sylvia Kratins. Corruption and greed rule Garcia’ world of overflowing stories.The Latin American passion for poetry activates  the colorful strands of Garcia’s magical tapestry, combining realism with fantasy.

The compassionate waiter Julio (elegant Gabriel Montoya) would like a date with distressed, anxious Aura (intense Neiry Rojo).  When Aura says she is lost and cannot go home, sweet Julio replies, “You can be lost two steps from home.”

Julio understands that Aura has seen terrible tortures in the countryside, where her family was slaughtered. He doesn’t know that Aura is secretly a guerilla fighting for her country. Traumatized by what they have seen, Julio and Aura embody rebellion against cruelty and torture, nobly.

An angel hovers over these tortured Latins, who agree that “Death glides in on white beautiful wings.” Aura is visited by her dead brother and Ricardo, the poet, feels the ghost, too.  The hotel is haunted by the murders and cruelty of the Colonel’s corrupt junta, casting a haunting spell.

Suki Palacios, the Lady Matador (imposing, graceful Erin Mei-Ling Stuart) presents herself as tough, since she is famous as a “Lady Matador.”   Suki wears yellow, the color of accidents and ill-omens.  Everything about her sparkles and scintillates. She tempts fate, even outside the bullring, and enjoys giving outrageous deadpan responses to the press.

When she’s asked if she’s afraid of death, she answers: “Tell me how you die, and I’ll tell you how you’ve lived.” We laugh when she dominates the evil Colonel (zany Steve Ortiz) in a sensual tango.

Garcia’s  magical realism contrasts vibrantly with lurking  horrors.   I’m not sure why it is called “The Lady Matador’s Hotel” because I am more interested in Aura’s story.  Aura is a girl whose life has been traumatized by fascist war and terror.

When Aura works out in the gym, her ability to stretch and bend feels Olympic.  Was I ever quite that limber?  And her powerful karate kicks aimed at the Colonel show her mastery of martial art.  Aura is a tortured soul and a strong one—we could all do with more Aura.

“The Lady Matador’s Hotel” by Cristina Garcia (from her novel), directed by Gary Graves, at Central Works, Berkeley, through Sunday, November 10, 2019. Info: centralworks.org