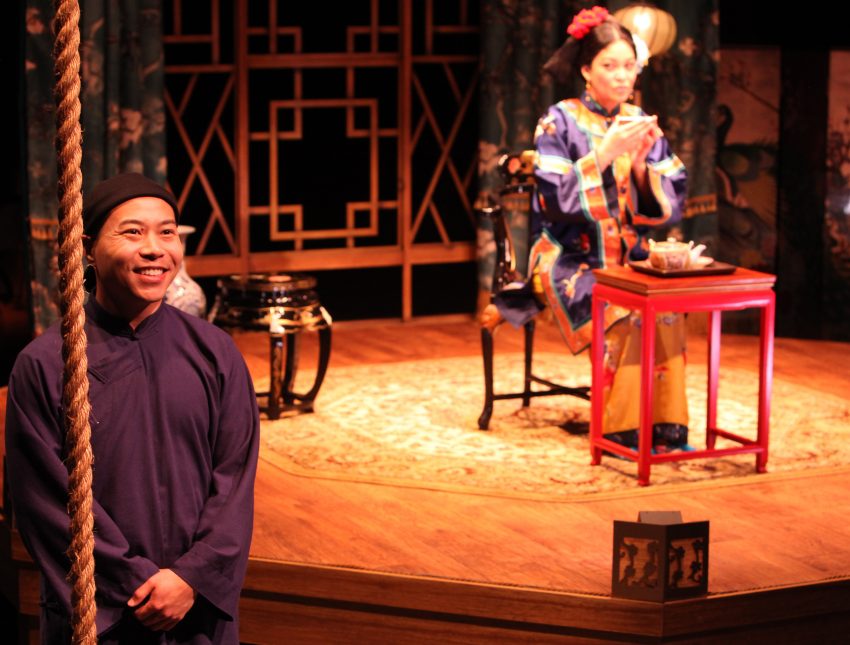 By the end of “The Chinese Lady,” Afong Moy (stunning Rinabeth Apostol) has all but abandoned her optimistic belief that she is on a mission of “goodwill” to the West. Even though she makes lists of racist killings and laws targeting Chinese Americans, she thinks she could do more. She still blames herself—if only she were more worthy, things might be different.

Or maybe we just were not really seeing her.

AFONG MOY: “Are you looking at me? Can you see me?”

She bluntly points out that she is not really with us; the words she speaks are not her own. She occupies the body of actress Rinabeth Apostol, who wears clothes that never belonged to the real Afong Moy.

At Magic Theatre, playwright Lloyd Suh demands our conscious participation in the exhibition of “The Chinese Lady” before 19th Century U.S. spectators.

AFONG MOY: “What is happening is a performance.”

We become the curious museum goers, eager to see the first woman from the “mysterious” Orient. As she unfolds her story, our culpability is laid bare.

Fourteen-year-old Moy has been sent to the United States to be displayed in a human zoo. She sits in a crude re-creation of a Chinese room, with ornate rugs, patterned window screens, and delicate furniture. It’s an uncomfortable feeling, watching a human displayed like an animal, walking on her bound feet, eating with chopsticks—all for our entertainment.

Apostol and Dao break the tension with gallows humor. We laugh when Afong shovels food into her mouth against Antung’s protests, or flashes a particularly saccharine smile. But she refuses to let us laugh at her or Atung. It’s moving to see Moy reclaim some power from the gawking museum visitors.

Despite her hope to create goodwill, her guardian warns Afong against us. As we watch their struggle, we are forced to admit that cross-cultural tolerance in the United States quickly sours into appropriation and cruelty. In San Francisco, 185 years later, we are still squirming in our seats.

As Afong says: “It is a beautiful thing to look at something long enough to understand it. But it is so much more beautiful to be looked at long enough to be understood.” She knows what it means to be both the object and subject of curiosity.

At Magic Theatre, Director Mina Morita wonderfully weaves together a fascinating immigrant story with an urgent plea for cultural comfort and comprehension.

“The Chinese Lady” demands we do more than observe—Afong Moy deserves to be seen.

Cast: Rinabeth Apostol and Will Dao.