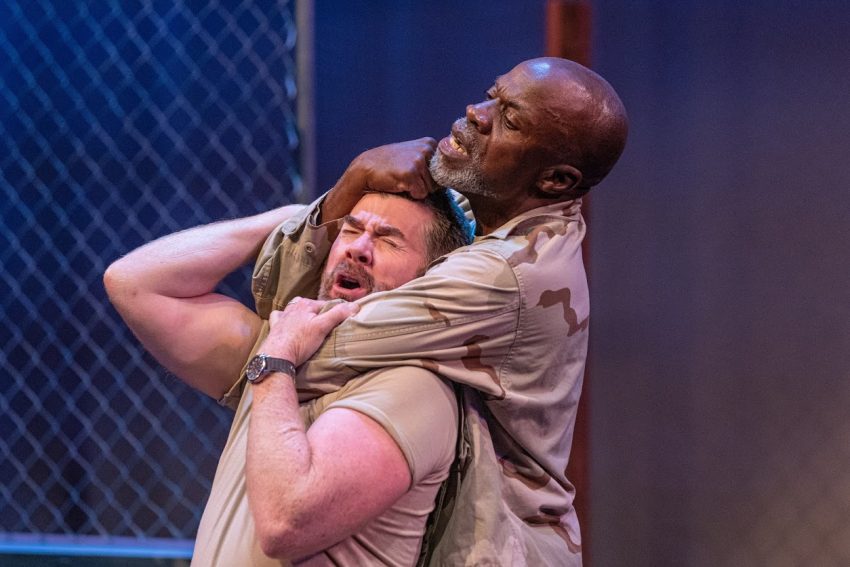 Callender is physically well suited to play Othello.  His face in repose possesses a rare nobility. In anger, his face embodies rage and fierceness; and his commanding voice strikes fear in the unwary. We feel threatened by his Othello’s irrational responses to Iago’s spool of lies.

Othello’s nobility is easily matched by the baseness of Iago (mercurial Michael Ray Wisely) who uncovers the chinks in the General’s armor. Everyone in Venice becomes prey for the amoral Iago—a prototype for our own present-day Big Liar.

Astute director Carl Jordan uses military uniforms in Cyprus to remind us of present-day horrors in the Middle East. Othello is tolerated and used by Venetian power brokers as a warrior, but as a Black immigrant he is ostracized and ridiculed.

Shakespeare’s “Othello” sounds the warning on anti-immigrant, anti-Black, anti-equality cultures. The great Black soldier’s words elicit waves of human emotion and passion.  When two-faced Iago faces us with his hatred of the Moor, we are transfixed by his unabashed duplicity, the depth of his vileness. He lies like a President. The masterful clash of Callender and Wisely reveals their inner workings—and exposes the One Per Cent’s hidden hatred.

There are no heroes in this tragedy where each character falls to human frailty. Cassio (persuasive Ariel Sandino) dangles marriage before the prostitute Bianca (earthy Samira Mariama). Cassio includes Desdemona (promising Isabel Siragusa) in his ambition, exposing his arrogance and incompetence.

African American Shakes plays “Othello” on an artfully constructed lumber framework, unfinished walls with a small raised platform. The see-through set suggests the outlines of Shakespeare’s own Globe Theater, in fact, bringing simplicity and power to the clash of the two titans: Iago and Othello.

Othello defines the noble hero doomed from the outset by a racist culture. The action of the play rightfully centers on the wonderful performances of Callender and Wisely, as we feel our fear building towards the tragic end.

With “Othello,” L. Peter Callender brings perspective, release, and immediacy.  Wisely embodies the big lies we hear every day. We wonder at the noble and evil sides of our country, face to face. Director Carl Jordan has opened the door wide to welcome understanding and change.