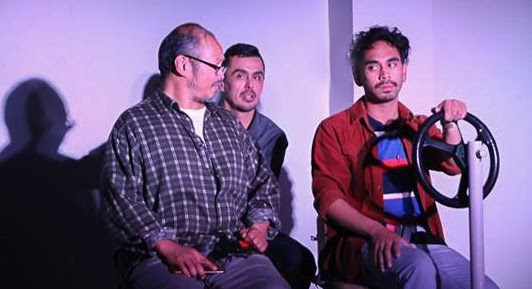 Spark Arts in the Castro proves to be the perfect intimate setting for Boni Alvarez’s three-man play “Driven.” Not ten feet away, the guys sit on stools, like seats in a car, while the driver’s shadow hovers behind them.

Director Ely Sonny Orquiza fills the small art gallery with intensity, action, and movement, drawing us artfully into a father-son dilemma. We feel like guests at a private showing of the Filipino family’s home movies.

When Dad Arnel (dynamic Alan S. Quismorio) picks up his son Danny (gripping Earl Paus) at S.F. airport, they embark on a family journey. The drive starts out smoothly; but then, the steering wheel shakes violently—as honesty and anger erupt.  The actors shift their bodies in sync with the car, but Arnel’s family vehicle breaks down—the engine fails.

Returning son Danny, a struggling actor in L.A., has just been edited out of his big-chance role in a movie called The Race for Life. Arnel believes that his son is a big-time movie star, and Danny struggles to tell him the truth. Trapped in the car with Dad, Danny’s dilemma tortures him. We feel his anguish, wanting to share his secret, but unable.

Their conversations move from Danny’s intense concern over Arnel’s DUI, to Danny’s teaching his father to make laugh-out-loud Zombie noises. They bond over feelings about ethnic stereotypes in movies and gentrification in their Filipino neighborhood. Arnel exclaims, “There are white people on the streets in East Palo Alto!”

Arnel accuses his son: “You’re acting when you talk. Don’t use your acting on me.” When Danny blurts out his intention to move back home, Arnel accuses Danny of not working hard enough–words we’ve all heard.

Danny’s replies, “It’s not about the trying, it’s about the hoping,” invoking pain and despair. Arnel counters with the hardships he endured coming to America, and working long, hard hours harvesting asparagus in the fields.

When  Danny reunites with  school chum, Qulie, (Hector Ramon Zavala),   sexually confused Qulie, makes embarrassing sexual overtures. But Qulie manages to break through to Arnel, saying, “He’s afraid of losing himself, and then losing you.”

Arnel’s  DUI stint with Alcoholics Anonymous paves the way for a new kind of listening. In Danny’s monologue on an S.F. stage, he retells the story of his father’s early days in the U.S., the tale he has heard a hundred times.

As a passenger in their car, overhearing family secrets, I feel more deeply the power and challenges of family and culture. It is a thrill to ride in that car, to have an inside view of Arnel and Danny’s lives.