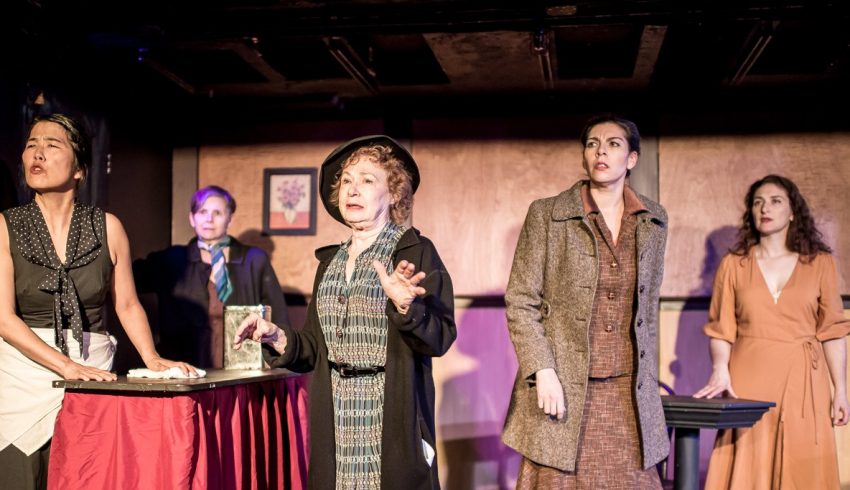 We hear World War II French jazz music as we descend into the Theatre Lunatico’s Subterranean Theatre—40s jazz of Stephane Grappeli, Django Rhinhardt, and a little Edith Piaf, with accordions and violins.

Director-writer Tina Taylor takes us to the Olivette family’s neighborhood café in Paris during WWII. In Act One, Scenic Designer Gideon Jones transforms the intimate theater into a lively café, and in Act Two, into a pitiless prison.

Kenneth Matis’ Pavel, a gentle Jewish resister, tries to help others escape.  But he is taken prisoner himself and reduced to a concentration camp corpse-carrier. The 1940s costumes accentuate the stylized postures and movement. The loud, authoritative voices of Nazi officers make us shiver in our seats.

As the French people suffer under the Nazi occupation, Olivette, the café owner (Shawn Oda), entertains Parisians and Nazis. But she also has to control her rebellious daughter Emilienne (Asha Alvarez), who annoyingly uses current slang like “I’m not on the same page with my parents.”

And as for “resisting” the Nazis, we witness only a few actions: the women hide guns, smuggle food, and entertain Nazis. Women issue warnings about whom to talk to and remark who has disappeared from the neighborhood. Rosita (Maria Grazia Affinito)  keeps calm and avoids suspicion by singing “Lili Marlene,” when German soldiers are in the café.

In Act Two, the stage is transformed to a stark wooden barracks in Auschwitz, where the dehumanized women of the French Resistance are surrounded by scattered bowls and buckets. In an alarming scene, the women are stripped to their slips and put under a “shower.”  When water really spouts out, they are rapturous. In the prison camp, women speak as a Greek chorus, reciting the war atrocities, which, unfortunately, comes across as preachy.

As Elsa, a Nazi Commander, Lauri Smith gives a chilling performance.  She tells us her hems were straighter than the other girls in sewing class and she follows the military protocol of the perfect German soldier to a T.  Smith’s recitations of the inferiority of the Jews SHOCK us with her convincing German accent and ardent expression.

As Alexine, a French woman doctor, Smith strikes our hearts with her refusal to help with ghastly Nazi experiments. Alexine invokes the Hippocratic Oath, bravely facing down a German doctor—with dire results.

Taylor uses actual diaries of surviving prisoners to recount the horrors. Life-long journalist, Helyette (Gwyneth Richards) scrounges scraps of paper so that she can write down what they are living through.  If she doesn’t survive, she hopes that her diary will be found.

“Convoy 31000: The Women of the French Resistance”—written & directed by Tina Taylor, at Theatre Lunatico, at La Val’s, Berkeley, through Sunday, November 24, 2019.  Info: theatrelunatico.wordpress.com