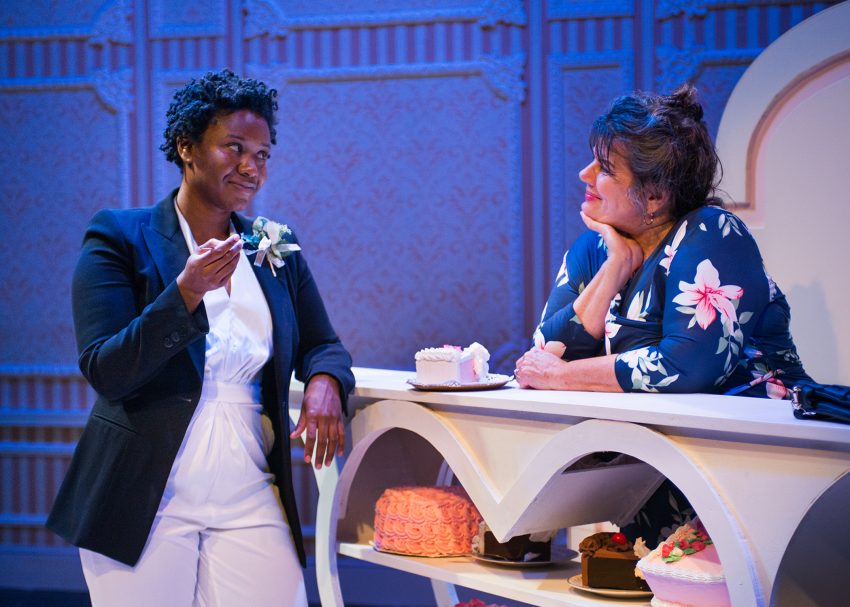 In mixing up “The Cake,” Bekah Brunstetter whips the batter right up to the edge of dramatic, breakthrough conversations, but then often backs away. As she builds on the appeal of witty sit-com humor, we wish she would go further.

Brunstetter pursues a middle ground between the progressive left and rigid right. But we never quite land on any meaningful resolution. “The Cake” struggles to pose questions that give us constructive insight.

When naturally cheerful North Carolina baker Della (blithe J.J. Van Name) confronts her husband Tim (skillful Dixon Phillips) with the news that her goddaughter is marrying a woman, Tim is characteristically disgusted. He brusquely refuses to talk about a lesbian marriage “because it’s gross.” Frustrated, Della resigns herself to silence and goes to sleep—end of conversation.

Native Southerner Jen (sensational Jensen Power) nervously travels back down to North Carolina to introduce godmother Della to her fiancé Macy (effective Asia Jackson). Jen knows she must confront the deep conservative values of her hometown.

In a heartbreaking moment, Della confirms Jen’s fears by refusing to bake her wedding cake. Jen, by far the most intriguing character, struggles to bridge the clashing worlds of New York and North Carolina. As the conflicted Jen, Power knocks it out of the park in a passionate performance.

Jen’s fiancée Macy, a black writer from Brooklyn, never hesitates to speak her mind. Although Jackson is a compelling performer, playwright Brunstetter weighs down Macy with clunky dialogue that feels like cliché liberal talking points.

Della, in her cutesy pink bakery, prepares to be a contestant on The Great American Baking Show. A stereotypical North Carolinian, Della loves Jesus and cannot tolerate vegetarian food. Van Name, perfectly cast as the bubbly Della, gives her just enough sweetness to be charming, but never schmaltzy.

Feisty New Yorker Macy digs into Southern Belle Della about the dangers of sugar, then launches an attack on Della’s Christianity. In an absurd and jarring scene, the playwright attempts to arouse our sympathy for Della, turning us against Macy’s liberal caricature. We lose track of where to place our sympathies.

In an agonizing moment of candor, Jen confesses to Della that for years she was terrified of sex, until she fell in love with Macy. In these moments of vulnerability, the script lights up, and director Tracy Ward makes them count.

When Della confesses to her husband how hurt she is by his lack of sexual attention, Tim confesses that infertility makes him feel impotent. Brunstetter teases us with fleeting, gripping reflections on sexuality and religion, but avoids following those threads—going for laughs, instead.

At NCTC, director Ward and the excellent cast of “The Cake” labor to rise above the meandering script. When they succeed, the show excels, but the lack of a distinct vision on the issues at the heart of “The Cake” forestalls dramatic triumph.