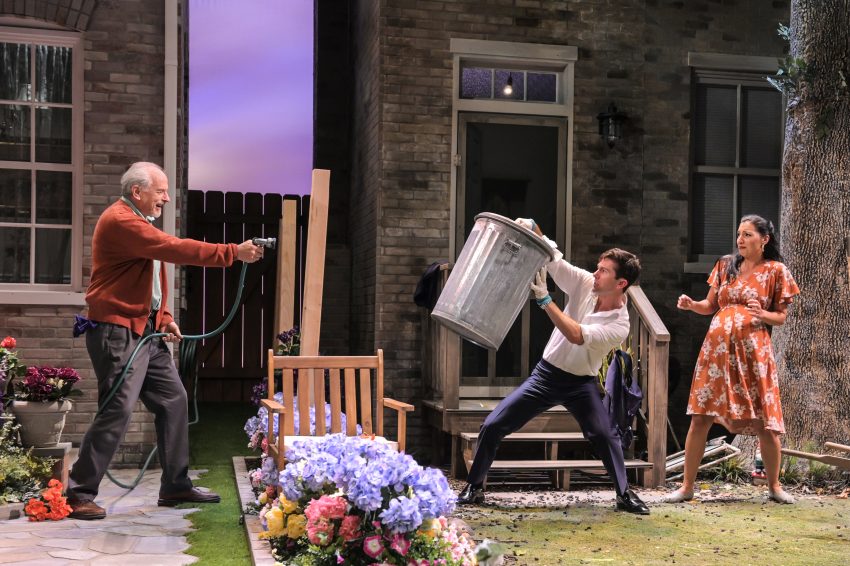 The Del Valles are young, Latin, and moving up. The Butleys are older, white, and retired. The couples manage their differences amiably, until Pablo Del Valle (Raúl Ramón Bencomo) wants to build a fence next to the manicured garden of Frank Butley (J. Michael Flynn). Their property line dispute hurls their clash of cultures center stage.

Zacarías rightly brings up timely, politically savvy issues. At the core, the dispute between older and younger neighbors showcases the conflict between entitlement and the American Dream. But her ideas about ethnicity, discrimination, and environmentalism get too diluted by a formulaic script, better suited for a laugh track. Think Desi and Lucy …

The young LatinX couple wants to build a bio-dynamic garden filled with native plants. But the old guard likes what they have and wants to keep it. (They’ve always had it, right?) Their entitlement justifies their control. These deep issues are oddly packaged in a slick, flashy play filled with cool Latin music and club dancing gardeners.

Director Michael Butler comes to terms with the material and delivers a play filled with obvious laughs and predictable moments. The cast works through the script with over-the-top emotion and sitcom-like timing. Flynn does a lovely job as proud Frank Butley, the retired white neighbor in an upscale neighborhood, who wants his beloved English garden to win Best Garden prize. Flynn gives Frank grace and presence.

The younger neighbors–Pablo and very pregnant PhD student Tania Del Valle (Livia Gomes Demarchi) embody earnest young idealists. We identify with them, (at least I do), but their personas become so loud and self-righteous, I end up not liking them, either. The exaggeration equalizes the couples, but at the cost of over-eager acting.

Both couples are over-confident, yet not mindful enough of their positions—naive for our identity-fueled culture. In the verbal battles that ensue, their banter provokes easy laughs, rather than true satire. I find it hard to take Zacarías seriously when I’m waiting for the next zinger.

“Native Gardens” quickly sheds light on serious political and cultural issues, then realizes there’s not enough time to explore them. The conclusion comes way too easy, a summary without a summation.  Better suited for the small screen, “Native Gardens” boasts more glitz than substance.