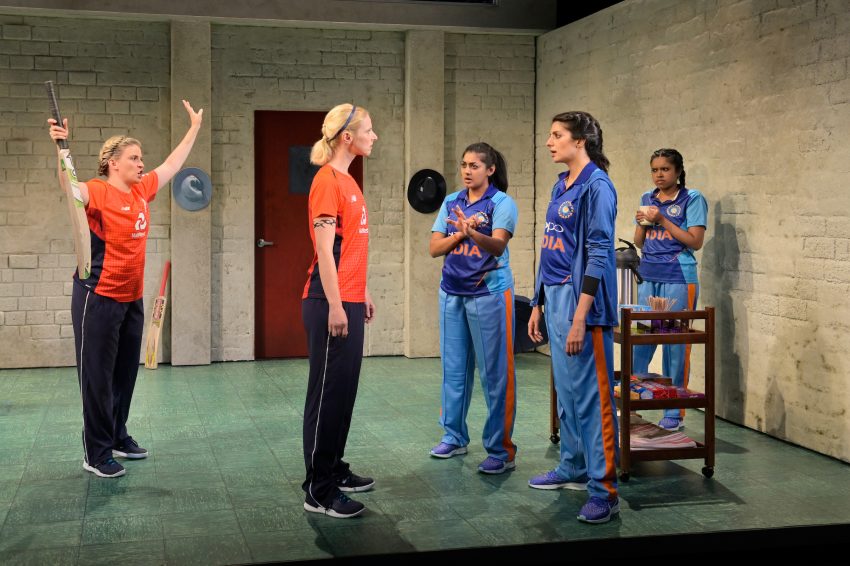 “Testmatch” by Kate Attwell pulls a narrative of colonial exploitation out of a heated Cricket match. In the bare, concrete locker room, the two teams meet while an English rain downpour halts their championship match. We painfully watch the British Women’s Cricket team outright bully the Indian team.

In part two, “Testmatch” leaps back in time to the 19th Century India under oppressive British rule. We meet the British women again, but now dressed ridiculously as two white, male, British aristocrats. Completely oblivious to the devastation they have caused in India, they cry out, “No more mangos?” after devastating the crop. They are insensitive, crude, and dim-witted. Atwell takes us “Back to the Future” and makes a clear comic connection between the modern corrupt English Cricket players and earlier, nridiculous, imperialist Brits.

Attwell uses Cricket as an emblem for British imperial dominance over India. Her intelligent writing highlights the brutality of British occupiers of India in addition to the game of Cricket.

Her insightful portrayal of entitled, cheating, profit-driven British colonizers riles us up. The politics of the game help people who are unfamiliar with Indian history understand the intricate ways in which oppressors temporarily triumph. I enjoyed this one of a kind history–that doesn’t get exposed and ridiculed nearly enough.

Though extremely intelligent, the script falls short of creating compelling action. The characters are bold but lack the depth necessary to make the production stand out.

Although Attwell doesn’t tell us much about Cricket, she captures the spirit of the game in one beautiful 19th Century moment: Daanya, an Indian village girl (striking Avanthika Srinivasan), deftly scales the wall of a posh British estate, eager to try out for the English Cricket team.

The two foppish British aristocrats rudely laugh in her face, but they allow her to demonstrate her bowling skills. Then, thanks to Pam MacKinnon’s brilliant directing, we experience an electrifying wave of her passion and prowess, as the ball flies by at warp-speed. It’s a joy to watch the arrogant English idiots’ jaws drop.

When sly British team captain England 1 (skillful Madeline Wise) reveals that she has “fixed” the game, we realize that she has abused her power. As a glory-seeking individual, England 1 represents British hypocrisy, selfishness, and failure of “sportsmanship.”

The three British characters, curiously named England 1, 2, and 3, parade their individuality while their Indian counterparts act more like a team. England 1 boasts about her modeling contract with Covergirl. England 2 (comical Arwen Anderson) persistently argues the virtues of dating a Rugby player, which she alone has done. And peacemaking England 3 (intriguing Millie Brooks) plays the mom serving tea. The Brits act like self-concerned Trumpettes.

Led by their fearless Captain, India 1 (bold Meera Rohit Kumbhani), the Indian women’s camaraderie shines. Secretive India 2 (clever Lipica Shah) and India 3 (inspring Srinivasan, again) actually form a lovable team. Their pride blossoms when one is insulted, and the others snap back. We feel them stand united for Cricket and for India. The Indian team embodies the best of democratic principles–under severe attack, today.

“Testmatch” by Kate Attwell, directed by Pam MacKinnon, by ACT, at The Strand, San Francisco, through Sunday, December 8, 2019.  Info: act-sf.org