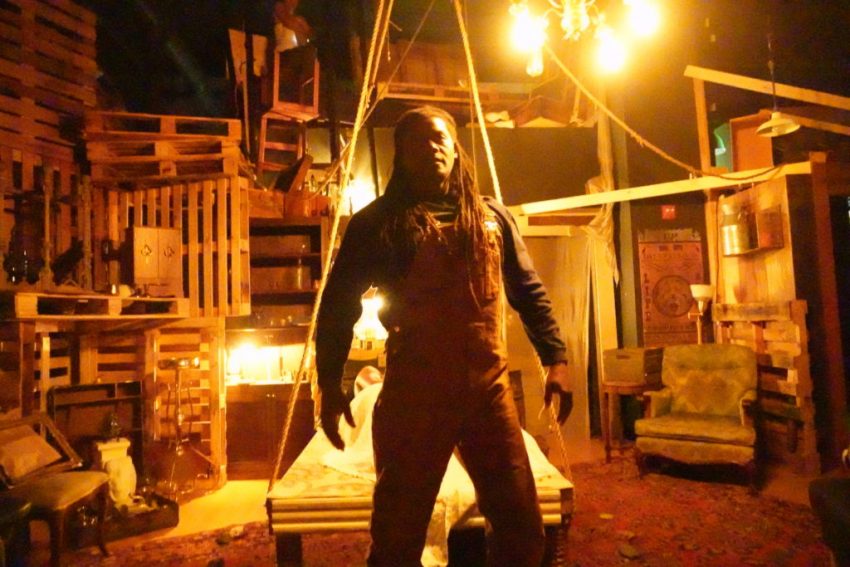 TheatreFIRST isn’t playing around when it comes to storytelling.  “From the Ground Up: An Anthology of Ghost Stories Made New” gratifies our urge for horror in eight ghastly tales. From traveling witches to online dating gone wrong, we are left laughing and petrified.

In this bleak room, we meet The Shopkeeper (Tierra Allen), our Virgil, who guides us to higher levels of suspense. Hunched over and bespectacled, she looks like a steampunk comic villian.  She wobbles, like Quasimodo, looking for matches to light her oil lamp. She reminds us of our frailty.

A nameless man I call Rice Man  (Rob Dario) tells the story of “Pock Mark Su” by Eugenie Chan. Caught in the act of eating rice, he carries a Chinese warning: “Finish all your rice, or you will get pock marks on your face, rendering you unmarriable.

Rice Man viciously stabs his face with chopsticks. He claims the superstition stems from trying to teach children not to be wasteful. Chan illuminates the importance of rice for survival in China, where poverty once ruled.

The “Boo Hag” by Brit Frazier is all about the church revival movement. When Black folks go to church  to atone for their sins, one drunken womanizer (LaMont Ridgell) is unrepentant. He has  an unquenchable thirst for breaking hearts and turning good women into ‘soiled’ conquests.  Then, he meets the Boo Hag, in the skin of a beautiful woman, in a red and black polka dot dress, so tight it fits like a second skin.

This modern day siren saunters up and no man can deny her, or her smile  of threatening teeth. Her eyes stare hungrily at us, as she sings her mating call. The man remembers being told by his mother always to close all doors and windows–and to avoid fast women. But he easily falls for the call of this skin crawler.

A unifying theme between all these tales is the aspect of learning: our narrators only meet terrible ends when they fail to listen to the warnings they have been given. All superstitions offer insight into our fears, which have to make cultural sense. Our fears represent what is going on in the current culture.

The story “Brutal” by Steve Yockey explores modern day dating; when two men meet on Grinder for a casual sexual encounter, things ends unhappily.  This tale is particularly important because in today’s app-based dating world, there is always an element of danger attached to meeting someone new.

“From the Ground Up” has a tale for everyone, so be prepared to sleep with your lights on and check under your bed. Yes, life is more interesting when monsters are lurking.

“BooHag” by Brit Frazier, directed by Cheri Miller.
“There Are No Ghosts in India” by Akaina Ghosh, directed by Kimberly Ridgeway.