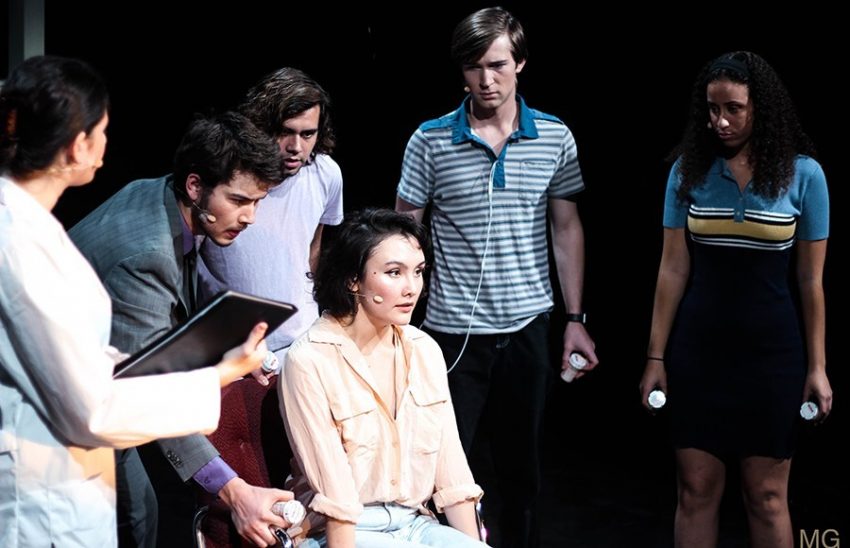 Providing the Bay Area with a beautiful and profoundly moving musical, BareStage’s impassioned production of “Next to Normal,” directed by Juan Castro-Cruz, presents us with a story that evokes raw emotion through powerful vocals, brilliant staging, and acting that envelops us in the abnormal life of the Goodman family.

As the troubled mother Diana Goodman, Keila Cone-Uemura captivates us with beautifully evocative vocals to cap her genuinely outstanding acting. In her striking solo “I Miss the Mountains,” Diana mourns her lost youth and shaky identity as she kneels down, drowning in psychoactive drugs to the point of emotional numbness.

We fear and suffer Diana’s reality with her, as she struggles with her psychiatrist, played by Skylar Davidson, whose insightful acting choices indicate the shortcomings of modern psychiatry. She notes that medicine is not magic, but “it’s all that we’ve got.”

We are intrigued and haunted by Diego Mason’s portrayal of Gabe Goodman, Diana’s grown son. Mason’s floating falsetto carries us to the worry-free land he describes in the enchanting melody “There’s a World.”

Diana’s husband Dan Goodman (impressive Peter Stielstra) demonstrates the hardships of a complex marriage. Stielstra, though merely twenty, becomes a tired, but hopeful, confused but loving husband in the songs “Who’s Crazy” and “I Am the One.”  Stielstra evokes silent sobs, as we feel his utter desperation.

Swearing, belting, and screaming to be heard, daughter Natalie Goodman (Kamilah Cole) elucidates the frustration of growing up ignored by her mentally unstable mother. Through Cole’s powerful vocals, Natalie vents her anger in “Everything Else.”

Meanwhile, her boyfriend, Henry (Tyler Gassaway) charms us with his sweet song, “Perfect for You,” reminding us of the innocence of young love.

An impressive two-story construction of a house’s interior, designed by Gassaway, and the production’s thrilling lighting set the mood as the drama unfolds. The lights start with angry red for Diana’s “You Don’t Know”; then shift suddenly to calm, steady blue for Dan’s touching reply, “I Am the One.” The artful lighting adds depth and emotion to this mesmerizing musical.

BareStage’s “Next to Normal” recalls theater’s power to draw us into the lives of others. This moving, poignant show makes us cry, laugh, and feel deeply. Don’t miss “Next to Normal.”

“Next to Normal” by Brian Yorkey and Tom Kitt, directed by Juan Castro-Cruz, at BareStage Productions, Berkeley, through Sunday, November 24, 2019. Info: barestage.berkeley.edu