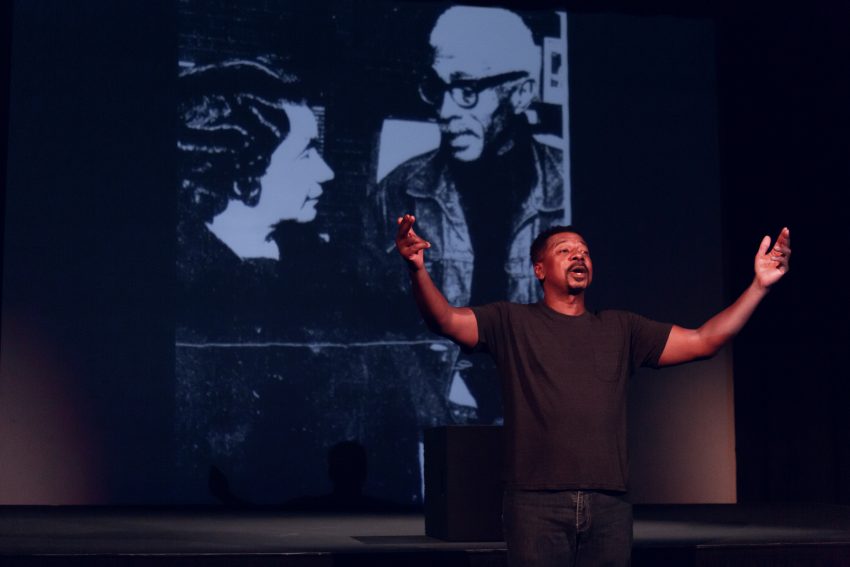 Throughout his solo show “Living the Shuffle,” Robert Townsend recounts a touching journey with his faith. Faith comes up early on, as a young Townsend prays for God to keep his mother safe. It’s a risky move in a town like Berkeley, yet Townsend is so genuine and modest, we immediately trust him. We’re stirred to see his deep sense of gratitude for the blessings in his life in these moments of reverence.

Townsend’s sense of wonder makes him a compelling storyteller. After so many years, he still maintains that sense of awe. We can see the glimmer of wonder in his eyes as he recalls Thanksgiving gatherings with his hero, Sidney Poitier, or a quiet dinner with controversial director Elia Kazan.

“Just being fearless, I decided I would make a movie about what I was going through rather than complain,” says Robert Townsend, describing the inspiration for his iconic 1987 film Hollywood Shuffle. Now, at The Marsh, Townsend is bringing his bold attitude to the stage for a remarkable night of storytelling and insights.

Despite his Hollywood success and a vast treasury of juicy stories, Townsend’s humble point of view quickly endears him to us. He starts us off with his childhood in Chicago’s poverty-stricken West Side. Nicknamed “TV Guide” by his friends for his photographic recollection of network schedules, we see Townsend’s creativity already blooming.

He dreams up a cadre of friends from his favorite shows: the Scarecrow from The Wizard of Oz, the droning Alfred Hitchcock, and stiff-necked Ed Sullivan. Onstage, you can almost see Lassie, the rambunctious border collie, wrestling Townsend and licking his face.

An infectious joy permeates the stage each time Townsend inhabits a character—his zeal can’t help but shine through. He commits unrelentingly to each character, and we laugh as he pushes the characters  to the edge of absurdity. Sometimes, in a blink-and-you’ll-miss-it moment, Townsend betrays the smallest of smiles, enjoying the joke just we as do.

As it turns out, Townsend’s unshakable attentiveness to even his smaller roles propel him to success. As an extra in movies and commercials, directs take note of his ingenuity.

“Living the Shuffle” provides a delightful dive into the career and philosophy of the multi-talented Robert Townsend. Free of ego or boastfulness, Townsend has earned the stage at The Marsh, Berkeley.