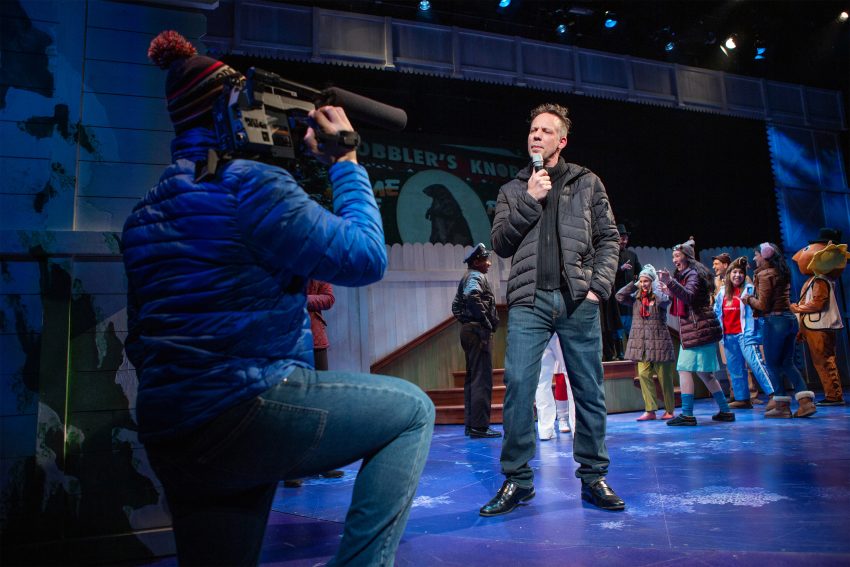 “Groundhog Day” is the perfect opener for the holiday season. Scrooge-like TV weatherman Phil Connors is caught in a February 2nd time loop, in Punxsutawney, Pennsylvania, the day the groundhog sees his shadow—or not.  Phil is self-centered, sarcastic, with a sense of superiority, well-played by expressive Ryan Drummond. But he is well-known, and the townspeople love him.

Phil wakes to a grating alarm, grabs his coffee at Lucy’s Cafe, and walks to shoot the TV weather. At the shoot, Phil meets sweet, tolerant producer Rita (subdued Rinabeth Apostol), who dreads working with him. Throughout the play, we know he will change, but how deep will it go? The musical offers much more about Phil than the Bill Murray movie.

The set design captures my curiosity from the start. A revolving stage moves actors and story, effortlessly, while a background screen projects photos of the snow-filled town. The stage is framed in white popsicle fences creating a down home, country feel.  At one point, customers at Lucy’s Café exclaim they’re frozen: “Frozen, frozen like a popsicle.”  Frozen in time, too.

Phil’s strengths and weaknesses are tested each recurring morning. He unfolds from indifference to caring, sarcasm to empathy—like Scrooge in Dickens’ A Christmas Carol. But Tim Minchins’ music offers more: the songs amplify Phil’s feelings at each stage of his growth spurts.

When Drummond sings “Stuck,” we share his feelings about the town and the people: “I’ve no qualm at all with your small-town people. I admire their balls, getting out of bed at all.”

In his process of changing from self-assurance to self-negation, he meets two alcoholic buddies (Scott Taylor-Cole, Jorge Louis Diaz) and rides with them on a destructive path. They sing in perfect harmony, “Nobody Cares.” “Nobody cares what I say, nobody cares what I do … I’m free!” cementing their depression.

In Act Two, after trying medicine, meditation, and a failed suicide, Phil opens his heart, learning music and humanity. Phil embraces a new self, filled with compassion, and “Hope,” singing “Never let yourself be defeated.”

The most moving song in the play, “Night Will Come,” sung by insurance agent Ned Ryerson (fast talking, magnetic Dean Linnard) affects us deeply. Back in high school, Phil bullied poor Ned, and that has marked him.  With Ned, we feel the darkness life can bring, but sing with him: “Gotta Love Life.”

The music touches our everyday lives, connecting us to the people of Punxsutawney, and to Phil.  Danny Rubin’s story and Tim Minchin’s songs shine brilliantly, orchestrated by Dave Dubrusky, with sound design by Teddy Hulsker.

“Groundhog Day” unearths the routine of everydayness and the voices of ordinary people. The musical version offers affirming tunes, through words and song, about love, life, and the human potential for change.