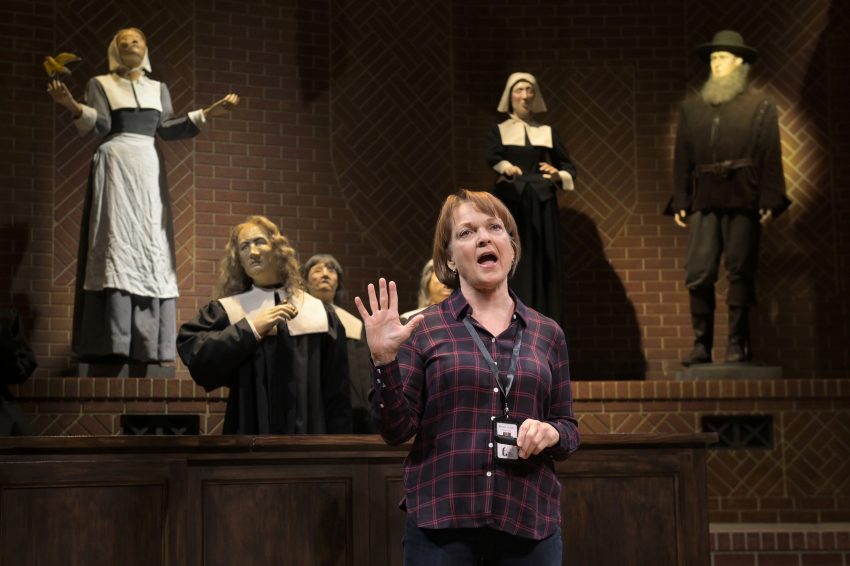 As you walk into Berkeley Rep, you see life-size mannequins in Puritan costumes, looming over the ground-level stage. It looks like the inside of a hokey Salem Museum of Witchcraft, in Massachusetts—because that’s where we are!

That’s the kind of in your face East Coast joke that pops out all over this new play by acclaimed playwright Sarah Ruhl. “Becky Nurse of Salem” puts us right in that local museum where Becky Nurse has worked for 20 years as a tour guide.

Wonderful Pamela Reed plays feisty, outspoken, edgy Becky with a strong Mass accent and strong opinions on everything. Reed totally inhabits this descendant of executed witch Rebecca Nurse. In 1692, Puritan judges, men of course, declared Rebecca Nurse, her great-great-great grandmother a witch and executed her. Modern day Becky Nurse stands up for her ancestor, and debunks the tales told to suppress women. She knows exactly where Rebecca was executed.

Witches are high on the dramatic scale these days because we know that witches were invented by MEN—to consolidate their power over women who have minds of their own. Men have been confining and murdering women since the Middle Ages, since Greek times, since forever!

Add to that the rampant opioid crisis in the U.S., Becky’s family’s addictions, and the influence of Arthur Miller’s “The Crucible,” and the toxic brew spills over onto us. Miller’s play comes in for some harsh debunking—producing some hefty laughs. Turns out he was after Marilyn Monroe at the time.

So here comes the great-great-great whatever of Rebecca Nurse, bearing that fateful name, who conducts witch museum tours in Salem. You know a confrontation between a rebel and an authority is brewing. Becky has a mean mouth, and Reed sparkles with superb Massachusetts’ vowels. She’s a gem.

It’s clearly Trump-Time, and Becky’s boss, a Harvard know-it-all named Shelby (imperious Elissa Beth Stebbins) lacks even a drop of humanity. Ramrod straight boss Shelby cannot abide Becky’s working-class cursing, so the scholar and the worker collide pretty fast—and Becky is out of a job that she needs very badly.

Becky is caring for a wayward granddaughter and lives on her current paycheck. She’s shit out of luck! Now, she’s an outcast in her own town, and seeks a job, advice, and love from her old high school boyfriend Bob (solid, superb Adrian Roberts). Of course, you can always depend on a Bob.

Anne Kaufman brilliantly directs Ruhl’s witty mash-up of witchcraft and prophecy: we meet a local “witch” who helps out in matters of love, revenge, and jobs. The confident witch (magical Ruibo Qian) walks out of prison, and lays the hex on those who repress love and spirit.

Witches figure BIG, including flashbacks to the Salem Witch Trials, and echoes of: “Lock Her Up!” A rare comic masterpiece!