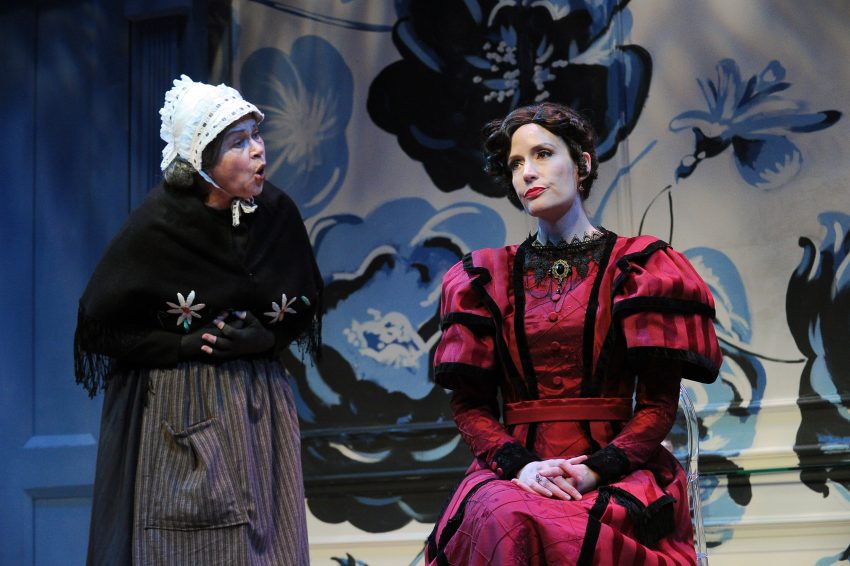 Anne Marie, the housekeeper, dozes on a chair. A gentle knock at the enormous blue door, where Nora exited with a bang fifteen years ago, startles her. And there, standing in the softly falling snow, is Nora.

Scenic Designer Christopher Fitzer creates an oversize room with large blue painted flowers on the walls. In the formal white drawing room, we see through a clear Lucite table, chairs, and clothes rack.

Dressed in costume designer Melissa Sanchez’s elegant red and black dress, Nora (elegant, forceful Gabriella Grier) pops from the set. Nora  explains to Anne Marie (colorful Judith Miller) that she’s become a feminist writer during her long absence. With a smirk, Anne Marie dryly observes that the quality of Nora’s dress proclaims she is not destitute. Clearly, she does not approve of Nora’s behavior.

As an active feminist, she advises suffering women to leave their husbands. In rough, modern language, the whole family dukes it out in fast, lively attack and defense. Lucas Hnaf’s “Part 2” goes well beyond Ibsen’s “A Doll’s House”—it’s more like Kramer vs Kramer.

Attacked for leaving her children in Anne Marie’s care, modern Nora shouts: “Men do it all the time!” She accuses Anne Marie of leaving her own child. Anne Marie points out that she lacks Nora’s social class advantages. Together, they consider what’s left for Nora, years after her scandalous 15-year abandonment of her family.

Lovely piano melodies mark each scene, with the name of one character projected, like titles in a book. Along with a subtle choreography, Lighting Designer Carolyn A. Guggemos changes colors from blush to deeper shades, indicating changing emotions.

After fifteen years, Nora awkwardly meets her daughter Emmy ( sparkling Katherine Hamilton), who is poised and confident. Emmy wants the bourgeois life that her mother fled—and she wants Nora to disappear.  Option 4 is to make real what friends and neighbors have led her to believe—that Nora died. The daughter has no sympathy for her feminist mother.

All these years, Torvald (decorous, upright Michael Champlin) has been concealing the scandal of his wife’s departure. Their new dispute over divorce reveals his deep deceit.

Directed by Jeffrey Lo, Palo Alto Players achieves a sensitive production with outstanding acting—Bravo!  “A Doll’s House, Part 2” is a fresh, new play.  My companion was quite impressed, too.

The opening on the evening of the Fourth Annual Women’s March marks a long journey.  Does Nora have to fight again for human rights? See “D.H., Part 2” for witty, heartwarming answers!