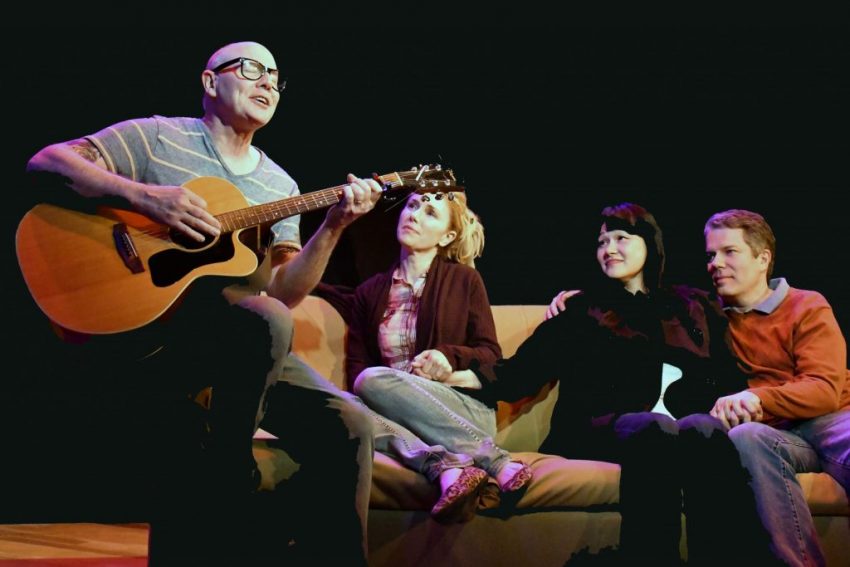 “How to Transcend a Happy Marriage” speaks to the intelligent theatergoer with incisive and witty dialogue, and erudite references to Ancient Greek myths Yet, the play could be called simply: “All You Want to Know about Polyamory but Were Afraid to Ask.”

Ruhl’s play sails into San Francisco to shock a jaded public which has already seen many sexual revolutions. “Marriage” is thoughtful and stimulating while being hilariously funny— perfect for a night of Bay Area theater.

Polyamory, a topic once considered taboo, is now more acceptable. The story dramatizes the sexual awakening of two self-satisfied, middle-aged couples: Paul and George (Matt Weimer & Karen Offereins), Michael and Jane (Malcolm Rodgers & Hilary Hesse).  As Jane, Hesse gossips hilariously about Pip, a temp in her office, who lives with two guys. Jane also reveals that Pip hunts and kills her own meat, “ethically.” Jane sure knows how to dish the ‘dirt.’

David’s fascination with math and triangles excites straight-laced Paul who is thrilled to find an intellectual and sexual kindred spirit. They mix philosophy and eroticism, showing that intelligence can be sexy.

Things heat up when Pip leads an impromptu karaoke session, singing “She’ll Be Coming Around the Mountain.”  The song quickly turns raunchy when she slows down the rhythm and gyrates seductively—adding sexual meaning to “coming.” Pip does a pole dance–using Jane as her pole.

The New Year’s party/orgy ends abruptly when they are interrupted by Jane and Michael’s 16-year-old daughter Jenna (feisty Celeste Kamiya). The teenager is aghast to see her parents and their best friends engaging in wild sex. Hiding behind the sofa, their shame contrasts with their initial euphoria. Comically, the teenage daughter becomes the scolding grown-up.

George (talented Offereins) repeatedly invites us into the discussion by breaking the fourth wall. She makes it clear that she’s in search of adventure, but fears destroying her good marriage.

Wonderful performances by all eight actors under the able direction of Adam L. Sussman.  I am impressed by Offereins and Fenner, as George and Pip. The ending is perhaps too neat, but Sarah Ruhl has given us an excellent, enjoyable comedy, which I highly recommend.

“How to Transcend a Happy Marriage”  by Sarah Ruhl,  directed by Adam L.  Sussman, at Custom Made Theatre, San Francisco, through Sunday, February 9, 2020.
Info: custommade.org