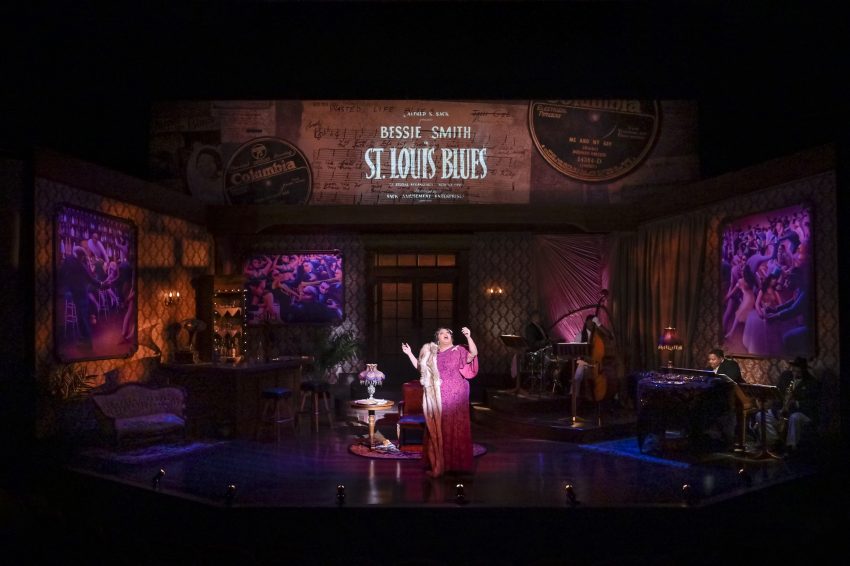 As the saxophone player (smooth Ric Alexander) steps center stage, he coaxes soulful notes and seductive rhythms to the tune of “St. Louis Blues.” We are thrilled as diva Katrina Lauren McGraw channels Bessie Smith, the Empress of the Blues, and sings her plaintive reply to the saxophone in “The Devil’s Music: The Life and Blues of Bessie Smith, A Play with Music.”

Born into a large family in a one room house in Chattanooga, Tennessee, Bessie Smith is poorly educated and uses coarse language freely. Still her music propels her to the top of the record industry. Her first big hit with Capitol sold over 780,000 copies during the Depression. Bessie’s music chronicles her loves and losses one momentous night in 1937.

Bessie suffers from hard drinking and cheating partners. Still, she admits that she also strays with multiple lovers, and they’re not always male.  Smith breaks many societal norms while becoming a huge success, making her an in-your-face pioneer for women’s rights. She speaks directly to us, with drama and verve.

Director Darryl V. Jones shows his sure and experienced hand in bringing out the best in the ensemble in this outstanding tribute to the legendary singer. The production sizzles with strong pacing, seamless timing, and exciting delivery. Jones’ plays never fail to thrill.

Angelo Parra’s story of “The Life and Blues of Bessie Smith” makes an ambitious attempt to cover her hits in this nonstop 90-minute show. It puts great demands on singer Katrina Lauren McGraw who delivers beautifully on every song. McGraw, a super talented singer, saves her strongest notes for the grand finale, a reprise of “Down and Out.” She shakes the timbers and brings us to our feet!

Bessie’s big hit, “Nobody Knows You When You’re Down and Out” was released just two weeks before the Crash of 1929, becoming her signature song. As the country falls into the Great Depression, Americans realize that Bessie speaks the truth: “If I ever get my hands on a dollar again, I’m gonna squeeze until that eagle grins.”  The song’s dire warning still applies—to today’s specter of growing homelessness under Trumpean rule.

Between songs, Bessie spars with Pickle (ebullient Kenneth Little), her master pianist.  Despite her bluster, the talented band loves her—for her many kindnesses. Little provides excellent piano accompaniment joined by a very hip group with exciting Roderick Brewster on stand-up bass and a rock steady Wilson Brooks on the drums. A very talented group of musicians!

“The Life and Blues of Bessie Smith” thrills us with an intimate look at one night in the brief life of Bessie and her America. Highly recommended.