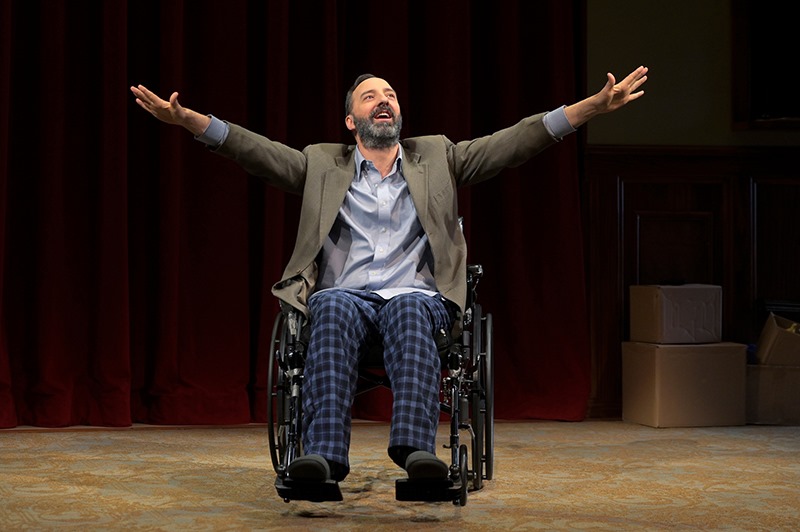 You may be familiar with “The Last Lecture” by Randy Pausch,” a Carnegie Mellon professor diagnosed with terminal cancer at age 47, in 2008. His lecture went viral with 19 million views and became a best-seller. Pausch appealed to our sense of gratitude, asking us to appreciate our lives and loved ones. His lecture has stuck with me since middle school.

Will Eno’s “Wakey, Wakey” tries to bombard us with life and its joys. Eno tries to spark introspection—so we can look afresh at the wonders of life.

“Wakey, Wakey” lacks the genuine appeal of Pausch’s final lecture. Obviously, playwright Will Eno is writing fiction, and we want to suspend our disbelief and go on a meaningful journey—but the flashy attempts at meaning fall flat.

There’s no character involved—it’s just a guy called “Guy” (engaging Tony Hale) talking at us. As Guy, Hale is believable, but Eno’s script is so disjointed and random that it’s hard to connect.

Instead, video clips and confetti serve as a perfect metaphor for the show’s reliance on empty witticisms, as Eno desperately tries to inspire meaningful emotion.

Tony Hale’s Guy, a professorial everyman, has prepared a lecture on how to appreciate life. A huge white projection screen behind him shows viral videos, anagrams, and screaming wild animals. Guy is determined to help us take less for granted—a noble endeavor; but Eno is stuck in cliché and tired expectations.

In one moment, we are asked to close our eyes and picture someone we’re thankful for, while a tone plays to illicit feelings of gratitude. Guy claims the tone makes us feel gratitude. We do this exercise—however reluctantly—to not much revelation.

To Hale’s credit, he’s a superb and detailed performer who successfully inserts himself into the script. As wry, affectionate Guy, we sympathize with his mission of goodwill. But writer Eno gets in his own way by being too clever by half.

Before you can process a video of animals screaming or babies cooing, Eno is on to the next special effect, leaving us behind. It’s 90 minutes of flashcards—Hale’s character keeps pulling out his lecture notes—one of them says: “Figs are full of iron.” The humor falls flat.

Eno’s script strains to critique contemporary life, and our short attention spans. But he falls into the same trap, folding in on itself.

Eno’s play is so self-congratulatory that it ‘jumps the shark’—becoming a parody of itself. The confetti says it all—too much unearned celebration.

“Wakey, Wakey” is too desperate to find happiness for everyone. The dazzling special effects claim to have found joy—but I’m left uninspired.