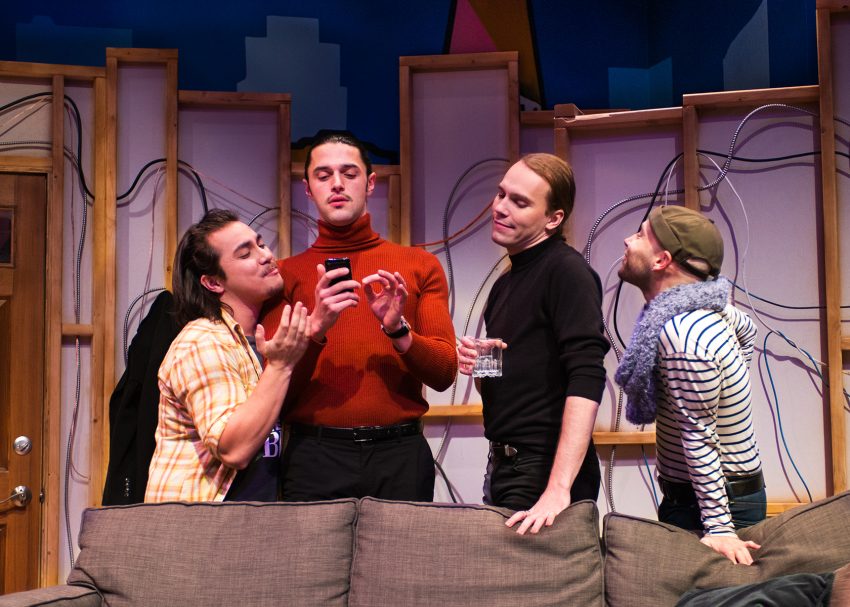 Ryan Fogarty’s gay bromance puts guilt, love, and regret on extravagant display. The hosts, a flamboyant gay couple: Dev (lightning-fast Devon Marra) and Smitty (confident Sal Mattos) attack each other, relentlessly. Their love is crumbling under the invasion of a digital mindset. Photo albums from wild parties explode off Smitty’s phone to upend their lives and muck up honest feelings.

Ryan Fogarty uses the title “You’ll Catch Flies” to open up his comedy of gay manners, where Oscar Wilde meets “Boys in the Band.” Surrounded by Instagram and sex tapes, Fogarty’s boys attack each other at high voltage:

SMITTY
Spoken like a true marketing person. You’re nothing if not the poster child for warmth.

Dev and Smitty’s deteriorating connection relies on photos and gossip to spice their waning love. While an almost couple, J (warm-hearted Chris Steele) and Marcos (vibrant, vital Vaho) rekindle their old love. But J and Marcos are shy and embarrassed, fearing their own honest feelings.

A third couple, two recently re-discovered brothers, Marty (charming Robert Kittler) and Cory (delightful Max Seijas) are innocents in a world of repressed and jealous love. How will they fare when Dev and Smitty try to secretly video them kissing . . . or more?

The acting is spot on, the directing is captivating, and the writing worthy of a modern comedy of manners. I laughed all the way through and came away with a better understanding of where digital madness is leading.  Anyone with a photo collection will fall off his/her seat laughing.

These six 20-something guys are throwing a “kiki”—an instant party—to celebrate Marcos’  return from Spain, where he lives with a British lover. As Marcos, Vaho gives a nuanced performance as the “cool” expat. Marcos is not “bitchy” like others; his fleeting facial expressions reveal his sensitivity:

MARCOS
That does sound really emotional. Meeting your parents, your brother, finding that love…

But J is fragile, and he still has a crush on Marcos. After denying his attachment, J retreats with Marcos to the balcony where they fall into each other’s arms. Gay love finds a way in this reflected world.

The all too believable surprise in Act Two comes when delightful Marty and his long lost younger brother Cory appear like two unknowing babes in the woods, ready for the slaughter. Seems that long lost little bro Cory has transformed Marty’s formerly glum exterior, and melted Marty into a warm, affectionate bromance. But are they . . . . ?

Fogarty’s romp with the guys elevates gay love to an equal plane with non-gay love. Why can’t gay people have rom coms too? Why can’t Wilde echo in a modern digital comedy? He can, he is. Bravo Fogarty!