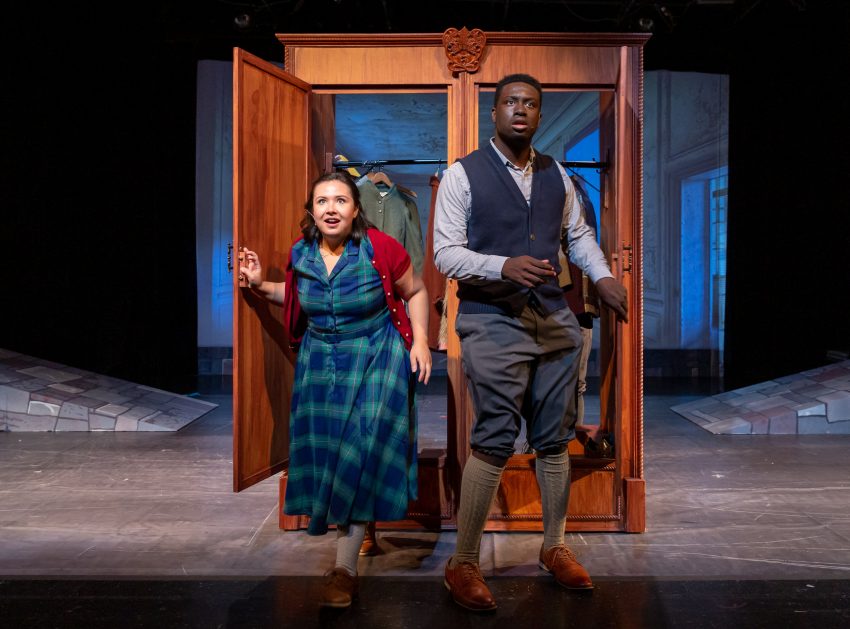 There is magic in Bay Area Children’s Theatre’s “The Lion, the Witch, and the Wardrobe.” When intrepid Lucy (lightbulb bright Cassie Grilley) ventures into the wooden wardrobe and pushes past the coats to emerge in snow-covered Narnia, a remarkable transformation overtakes the stage. The music swells as the wardrobe is replaced by the iconic lamppost from C.S. Lewis’ novel.  Tall, white screens unfurl, and we see images of a serene, snowy clearing in the forest.

The reverse journey is just as magical: the wintery woods are whisked away, replaced by the imposing wardrobe in a dilapidated Victorian room. There was something deeply satisfying in seeing Narnia, a world I spent countless hours in as a kid, come to life on stage with my four-year-old daughter next to me and my two-year-old son on my lap. Will they remember this, too?

“It’s real,” Lucy insists to her brother, Edmund (likeable, versatile Keinan Woodson). We all want to believe, and do.

The only problem with this production is it takes us too long to get to the meat of the story. Le Clanché du Rand’s wordy adaptation forestalls dramatic tension. Instead of starting with Lucy’s journey into the wardrobe and showing us the story, allowing it to breathe and grow, the characters pack in a lot of narration. The commentary is woven through the whole play and goes over the heads of the kids.

That being said, the two main actors, Grilley and Woodson, juggle several characters and a mountain of lines with skill and humor. One moment Grilley is the sweet, innocent Lucy, the next her critical sister, Susan, and the next, the foreboding, evil White Witch. Woodson plays a comical Edmund as well as the eldest brother, Peter, Mr. Tumnus, and The Professor. They pull it off with lightning-quick costume changes and clever staging.

Grilley and Woodson are supported by a wonderful cast that flits in and out, playing howling wolves, statues frozen by the White Witch, badgers, birds, and housekeepers! The moving pieces fit together seamlessly, the pace never slowing.

Anticipation grows for Aslan’s entrance. And when he does emerge, a minimalist, yet striking puppet controlled by two actors, the effect is thrilling. “Wow! He’s way bigger than I thought!” a boy behind me tells his father.

And then there’s that booming, deep voice, guiding and teaching the young heroes. Aslan, tossing his mane and roaring is a highlight.

Although recommended for children over five, the music, set changes, and action can interest younger kids. If you or your children are fans of The Lion, the Witch and the Wardrobe, this is definitely worth seeing.

“The Lion, the Witch and the Wardrobe” —from the story by C.S. Lewis, adapted by Le Clanché du Rand, directed by Hannah Dworkin, Set & Projection Designs  by Kevin Landesman, at Bay Area Children’s Theatre, Berkeley, through Sunday, March 15, 2020. Info: bactheatre.org

“The Lion, the Witch and the Wardrobe” moves to the Children’s Creativity Museum Theater, 221 Fourth Street, San Francisco, March 21 – April 5.