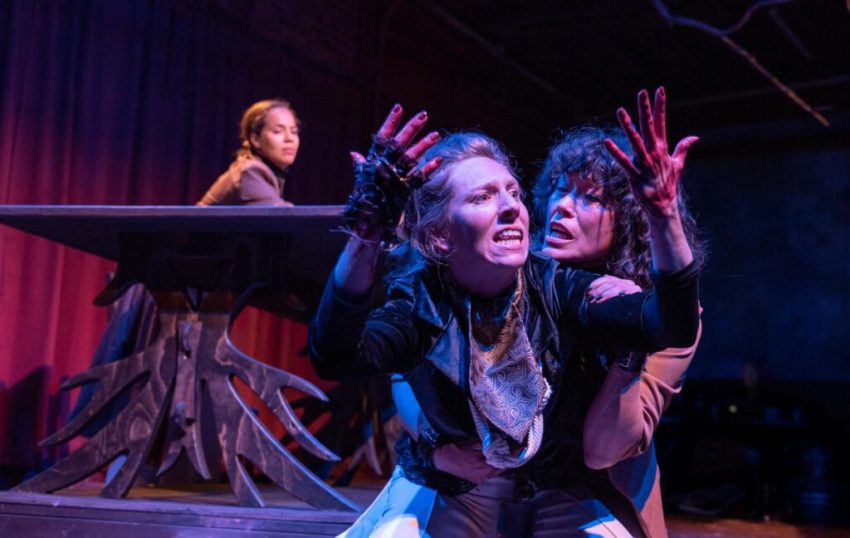 Watching Macbeth go down the muddy hole, circling the bloody drain of ambition, cynicism, and self-delusion, who can refrain from seeing the connection to our present regime? That same cycle of competition, smug self-satisfaction, and projection—seeing enemies under every rock—resides with us still. We see him daily, that insecure Macbeth, the faker from TV’s “The Apprentice.”

Ubuntu Theatre Project’s fearful Scottish Play has just the three nameless witches, played magnificently by Emilie Whelan, Mia Tagano, and Lauren Spencer—those three women play all the roles in Director Michael Moran’s daring “Macbeth.” As multiple characters, they lurk around the medieval wooden table, the throne, the antlers, and the mud/blood bath that make up the stark, arresting staging.

Bravo to Moran and Karla Hargrave for the stunning design. Antlered, tortured branches hang overhead like a crown of thorns. Primitive, murderous greed and grasping ambition loom over every scene in this brutal vision.

It’s as though the Idiot-in-Chief, Ivanka, and Jared finally reveal themselves as aliens. Every speech by Lady Macbeth or her Lord reminds us that their self-dealing, fear, and corruption reign over us—a vindication of Shakespeare today.

How can we avoid the current meanings for: “So foul and fair a day I have not seen.” “When the battle’s lost and won . . .” “Unsex me here.” “Sleep no more, Macbeth hath murdered sleep.” “My way of life is fallen into the sere, the yellow leaf…” “…a tale told by an idiot, signifying nothing…”? These schoolbook lines of poetry are now our headlines.

In a long brown military coat, Lauren Spencer plays a thoughtful Macduff, always gripping and persuasive. As a scheming witch, she plans to destroy the dark, decaying kingdom. As Duncan, Lady Macduff, and Ross, she tears at our hearts for liberation from this darkness—a powerful presence.

Mia Tagano struts and poses as a relentless Lady Macbeth, a wonderful Banquo, and Malcolm. Tagano sharply defines each role as a devil in the drumpfean cabinet of evil.

Emilie Whelan embodies the bloody aspiring King who drives himself mad with greed and self-deception. She’s hilarious as the drunken Porter at the Gate, and innocent Fleance. Whelan sinks deeper into Macbeth’s bath of mud at center stage, seductively imploring us to follow her.

As I watch these three wonderful witches scheme and smirk, I realize that we are watching the palace intrigues in Washington, today—in the White House, and in Congress.

Each of these roles are instilled with the basic horror that runs their country—the witches are inside everyone, and there’s no escaping their will run rampant. Director Moran and his three witches show us how our country is being run. How long we have been up to our necks in blood without noticing it?

A great achievement by Ubuntu and Michael Moran. We are compelled to think about today’s news as we sink into the lies and self-satisfaction of Moran’s “Macbeth.” Beware! Enjoy!