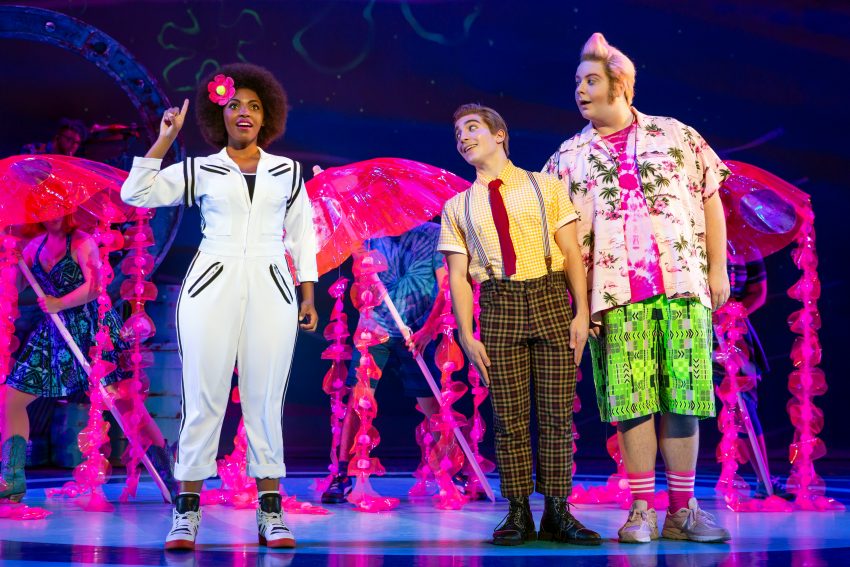 You don’t need to be a child or a “SpongeBob” fan to enjoy the wonder and excitement of this cartoon classic in a big musical world.

With one hit song after another by writers like Aerosmith, Sara Bareilles, David Bowie, and Panic! at the Disco, the excitement builds.  John Legend’s signature jazz sounds serve as SpongeBob and best friend Patrick Star’s (Beau Bradshaw) reunion ballad, “(I guess I) miss you.”

Rapper T.I. supplies the beats for villainous Plankton’s (Tristan McIntyre) impressive hip hop act with “When the Going Gets Tough.” The star-studded soundtrack adds a long list of surprises to the musical.

Among many impressive performers, Mr. Krabs’ whale daughter, Pearl (powerhouse Méami Maszewski) pops out.  Her soulful riffing in “Daddy Knows Best” grabs our sympathy. She laments her father’s love for money over his love for her, adding sweet nuance to the “spoiled brat” theme.

In line with the cartoon’s playful tone, majestic jellyfish cleverly fashioned from pink umbrellas and streamers float through the aisles. A carefully choreographed black light dance uses fluorescent sponges as bright yellow fireworks. Every detail is well thought-out, down to the suction cup noises and memorable squeaks of Squidward and SpongeBob’s footsteps.

Brave SpongeBob and inventor buddy Sandy Cheeks (Daria Pilar Redus) climb to the top of a wonderful “volcano” constructed of cardboard boxes and industrial ladders. The duo maneuvers in and out, as the structure shifts under their feet. Helpers detach and swivel pieces that fit together like deceptive puzzle pieces, heightening moments of tension with skillful design.

“The SpongeBob Musical” offers spectacular effects, non-stop fun, and a big bubble party. It’s not profound, but it’s a great time for kids and adults who love   the cartoon. For those of us who are simply curious, go see it and you will be surprised. SpongeBob’s got more depth and artistry than ever!