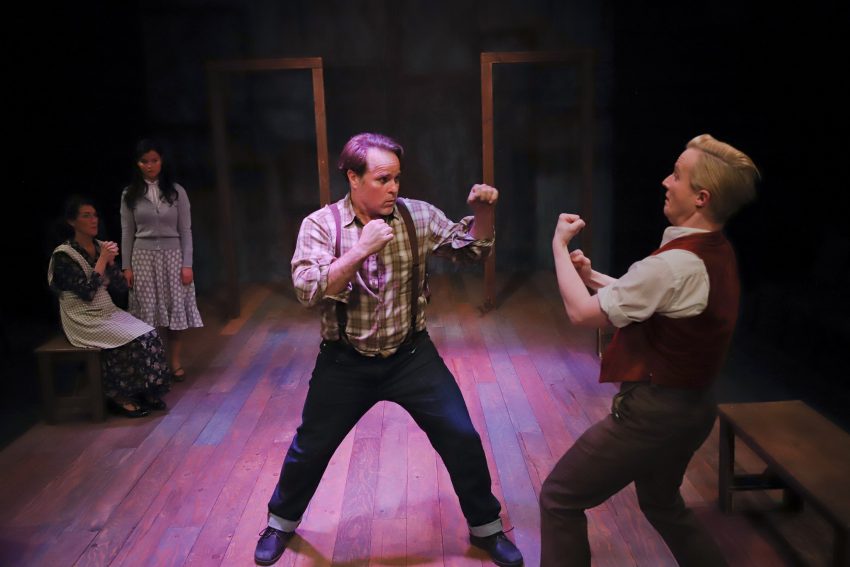 At 6th Street Playhouse, Arthur Miller’s “A View from the Bridge” embroils us immediately in the struggle between immigrants, “illegals,” and the law.

In a 50s Brooklyn tenement, lawyer and participant-observer Alfieri (dynamic Joe Winkler) watches local longshoremen scrape out a living. Italian immigrants protect newly arrived “illegals” from the Feds, fearing U.S. immigration laws. Alfieri tells us, “Justice was very important to them.” The word “justice” jumps out at us, and we feel tragedy looming.

Congenial Alfieri introduces us to powerful Eddie Carbone (Edward McCloud), then the lawyer disappears behind two framed doorways. An imposing steel wall separates him from the action, and Samuel Barber’s “Adagio for Strings” swells with sadness.

The Carbone family includes Eddie; his wife, doting Beatrice (Mary Delorenzo); and their adoring niece, Catherine (charming Nina Cauntay). Seventeen-year-old Catherine sits at her Uncle Eddie’s feet as he strokes her hair. Beatrice’s cousins will arrive shortly: two illegals on a torturous voyage from Sicily. The Brooklyn accents, 50s flowered dresses, and gray men’s work clothes draw us to sit with them on wooden benches to share their conversation. 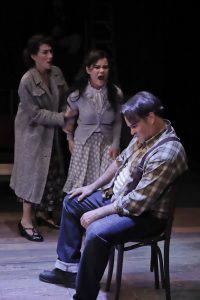 Today “Illegal” aliens jump walls, pack into unsafe boats, and plow through jungles to reach prosperous countries all over the world. They are driven by torture, hunger, gangs, and climate disasters. As workers, they sweat for pitifully low wages. Immigrants manage to send money home, and cling to their home culture and language for safety. Families hide them from the police, ICE, and Border Patrols. In Miller’s “A View from the Bridge,” (1956) the Sicilian clan demands loyalty and silence. How much has changed from 50s Feds to ICE, today?

The fresh off the boat cousins, charming Rodolpho (Erik Weiss) and hard-working Marco (Matt Farrell), arrive with excitement and secrecy. But Eddie bristles when he senses the sparks between Catherine and Rodolpho. Eddie has focused all his love and attention on his niece, ignoring his ingratiating wife, Beatrice. He must separate the young lovers. We feel his struggle brewing, as Miller exposes Eddie’s angry lack of self-awareness. 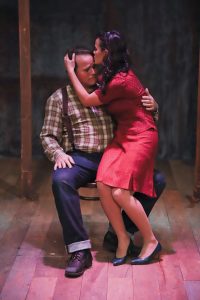 Eddie seeks Alfieri’s legal aid, stepping outside the unspoken code of silence among the Italian immigrant community. Will Alfieri have the answers? Eddie accuses Rodolpho of being gay—he sings, he cooks, he sews! He only wants his green card. Alfieri responds, “There is no proof. You have no recourse in the law.” Alfieri feels powerless. New World ideas clash with Old World values.

Where can poor Eddie go for help? Immigrants are exploited, but not protected. His Sicilian clan refuses to expose Rodolpho. Will Eddie blow the whistle on his own family?

The damn breaks for Eddie, and desperate madness leads to a betrayal of himself and his own people. 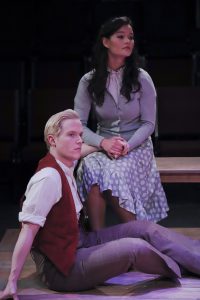 Lights and Sound (April George and Joe Winkler) set the mood, beautifully. Bravo to dialect coach Kate Brickley for fine Brooklyn accents. Director Jared Sakren moves his actors seamlessly from bench to bench, as their conversations shift, keeping us in intimate touch with them.

Arthur Miller reminds us to reevaluate the words “law,” “justice,” and “fairness.”  How are the laws working today, in our decades long immigration debate? Why can’t we decide what is just or fair, now?

Maybe the “Pledge of Allegiance” should get rid of: “with liberty and justice for all”? 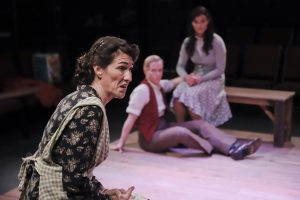