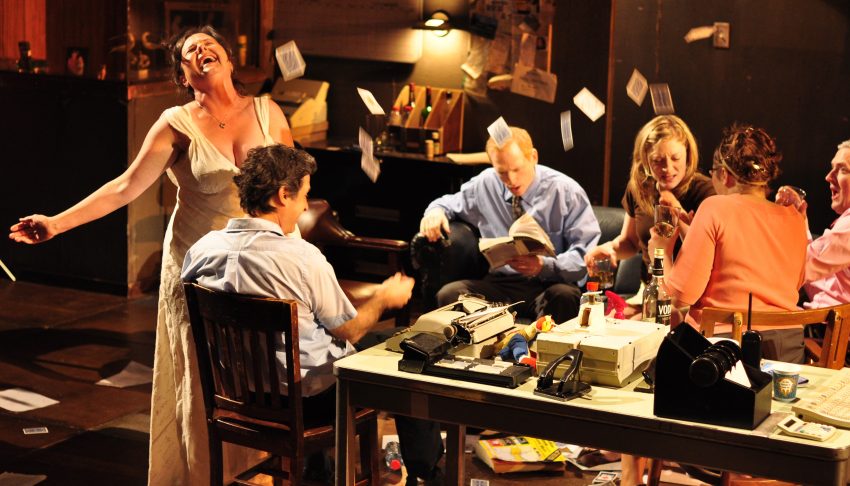 New York-based Elevator Repair Service has been performing “Gatz” for ten years all over the world. At last we have a chance to see and hear their six-hour marathon for ourselves at Berkeley Rep, so there’s plenty of time for its greatness to grow…. and grow….

By the end, we are hooked, tearful, and amazed at their genius, as they read and act every word of Fitzgerald’s 1925 novel The Great Gatsby.

We lose ourselves in the grey-green 80s office we see onstage. Subtle Scott Shepherd plays a downtrodden office worker, who finds the novel in his desk drawer, and starts reading it out loud—to us. In his crowded office, complete with broken computer, high metal shelves full of files and boxes, and a glassed-in corridor, the reading turns into a spectacle.

Artfully, Shepherd draws out the sounds and the music of Fitzgerald’s revelation of the Jazz Age. Shepherd breaks into Midwestern and Brooklyn accents, making the naive narrator Nick Carraway immediate and thrilling.

One by one, his twelve nameless co-workers look over his shoulder, and take on other roles. It’s amazing to watch as actor Susie Sokol becomes Jordan Baker, the cheating golf pro.  Hard-working Laurena Allan turns into sexy Myrtle Wilson, the demanding working-class girlfriend.

They are re-living the Roaring Twenties, an age of self-indulgence, runaway stock market, and jazzy music—in the Roaring Eighties. But in “Gatz,” Tom and Daisy Buchanan (Robert M. Johanson and Annie McNamara) act more middle class and self-pitying than Fitzgerald’s millionaires.

In Gatsby, the ultra-rich live in the old mansion across Long Island Sound from Jay Gatsby’s newer, flashy white palace. Gatsby stands for extreme idealism and comic optimism—but he cannot compete with ruthless Old Money. Gatsby thinks he can still win back wavering Daisy from brutal Tom after all these years.

But it’s too late, the clock won’t run backwards. Director Collins’ “Gatz” proves that the green breast of the New World has been violated.  Nick Carraway, the greenhorn Wall Street bond-trader and midwestern refugee, cannot make peace with rampant lies and deceptions.

Yes, it’s Prohibition, so they drink like alley cats. Yes, women are revered or destroyed, so Tom slugs his mistress Myrtle, breaking her nose. “Gatz” brilliantly parallels Jazz Age extravagance with 80s greed.  All our history is there—from post-war WWI profiteering to Reagan’s turn to oligarchy.

No wonder poor Nick must go back to the Midwest—who can stand up to that elite self-delusion, lying, and cheating? Nick knows that the Crash is coming—join him for six hours of insight and laughter—a once in a lifetime trip!