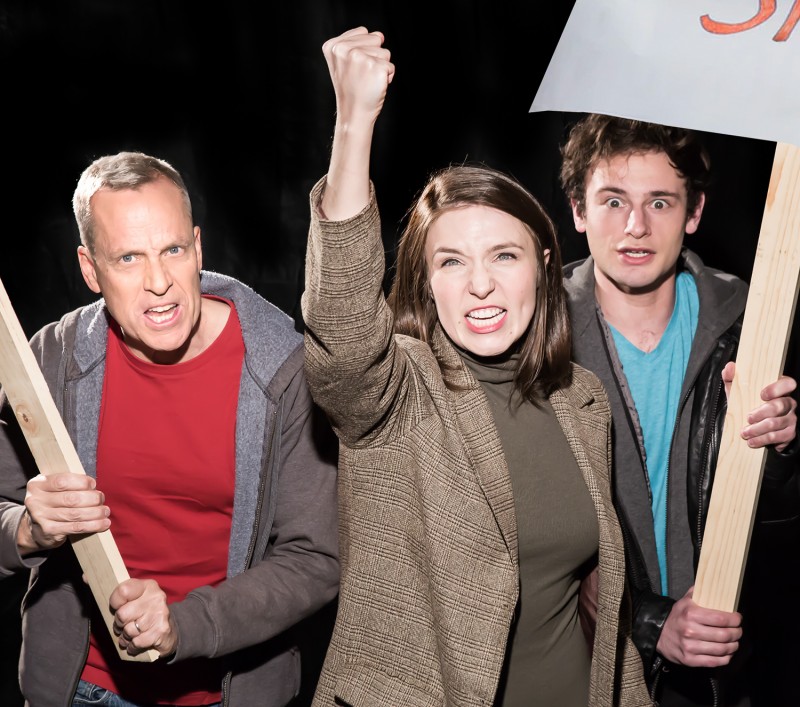 John Fisher Unravels the Metamorphosis of a Politician

In a nation shrouded in political strife, John Fisher’s “Radical” is a laugh-out-loud release of bi-partisan anxiety with a message.

Self-determined Jack (dynamic John Fisher) has decided to run for District Supervisor in San Francisco as he picks up trash off the street. Through a video Selfie, he addresses unknown viewers on his iPhone, then zips the video over to YouTube.

“Hi, I’m Jack … and I’m running for District Supervisor” is his frequent entrance and exit mantra: “MUNI  and BART should be free! Why pay to be terrified?’ he announces loudly and cheerfully, as he jogs, bikes, and exercises relentlessly—a hilarious politician taking Selfies.

Jack welcomes audience participation—taking a surprised theatergoer for a ride on a taxi, making another a cop.  We are totally enveloped in his campaign. We want Jack to succeed. His quick and clever jokes expose serious S.F. issues, amidst the laughter.

When he is finally forced to tackle the big issue of homelessness, he has a secret solution. His “likes” soar to over 2,000, gaining endorsements, and catching the attention of an on-line newspaper.

With each new “Hi, I’m Jack,” we notice slight changes in Jack. I’m reminded of “Groundhog Day,” where, on each recurring February 2nd, Phil Connors sheds a piece of his selfishness. Jack goes from the opposite way.  But we are charmed by his smile. He’s become more personal. He’s solicits questions and addresses them.

Diana and Plant join forces with Jack, although Diana questions his motives and ambitions. Plant becomes sexually involved by empowering Jack, “coming out” on his own.

When Jack is forced back to the homeless issue, his popularity soars to the mega-thousands. The politician has bloomed, the metamorphosis is complete.

Fisher’s creative new comedy has found a unique way to unravel a political rise to power, along with Plant’s  “coming out.” With three stellar actors, innovative staging, and the audience as part of the crowd, we are all caught up in Jack’s wave of power.

You’ll have to see it for the twisty-turny surprise ending. Fisher’s fresh comedy of ideas makes us feel joyful and yes, hopeful. See for yourself!

“Radical” has moved to The Marsh, San Francisco: For details, see themarsh.org