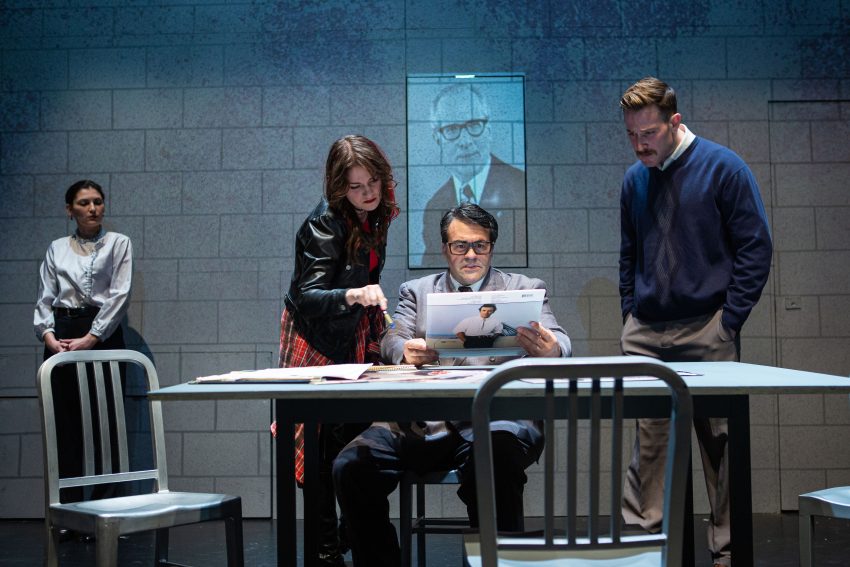 In “Born in East Berlin,” Soviet negotiators insist: “The U.S. refuses to use the metric system—they’re always at war with the rest of the world!” Rogelio Martinez bases his play on real events in the 80s, bringing a double-edged humor to the East vs. West conflict.

Lively Ash Molloy does a great job as Anne, who is busily negotiating a concert contract with the East Berlin bureaucrats in 1988. The East Germans claim they want The Boss to play in the Soviet-controlled East. Anne, a Springsteen rock n’ roll true believer,  tries to talk capitalist business with the befuddled Easterners—a truly funny encounter.

With her red-streaked gravity-defying hair, sexually liberated Anne knows what she wants.  She’s an American go-getter, enamored of Springsteen’s working-class message. And she’s a whirlwind at her public relations job, too.

In the proposed contract, Anne includes a list of the band’s demands—including French’s Mustard and Poland Spring Water. She explains to the puzzled Soviets that these silly demands merely express the band’s fear of returning to poverty. She admits that it’s unlikely they will ever touch these odd products.

At the crucial meeting with stoic, grey suited East German bureaucrats, Anne meets young Hans (Patrick Andrew Jones), teasing and flirting with him. All-American Anne thinks she holds all the “freedom” cards. Both actors offer nuanced and dynamic characters, pulling us in even when other, less vital couples appear. Faced with the heat from Anne, Hans comes out of his shell–sensitively rendered by Jones.

Teddy Hulsker’s wonderful projections of The Wall and crowds of Ossie rock fans bring 1988 East Berlin to life for us. Vibrant Anne brings comedy and daring to Hans, the nervous spy. Lots of hearty laughs at the expense of the isolated East Berliners. The Ossies’ dream of watching MTV—they love the commercials!

The jokes about Western materialism vs. Eastern austerity still make us chuckle. But the jokes about the poor repressed “Commies” feel outdated. The East Germans point out America’s multiple atrocities, including the 80s Contra War in Nicaragua; but Martinez implies that American individualism ultimately liberated the East.

Another Soviet interrogator, Lotte (severe Lauren Hart) accuses Anne: “Music is political. You are political!” stating the core of Martinez’s comedy. Anne claims that her love of Springsteen is about rock n’ roll, that’s all.  She doesn’t understand that Springsteen can also imply Western narcissism and coercion.

Lotte tells Anne: “You don’t know what your government does in Nicaragua,” revealing secrets of U.S. imperialism in the 80s. Before the deal is sealed for the massive concert, the political issue of Nicaraguan flags in the stadium explodes into serious conflict.

Even in the face of American wars, Martinez asserts that individualism will triumph. At the concert, The Boss chooses a random girl from the crowd, pulling her up onstage. We are thrilled as they rock to “Dancing in the Dark”—delivering an inspiring and challenging moment. “Born in East Berlin” relives the 80s in a sharp, comic vein, offering us a chance to reconsider the rock n’ roll of history.