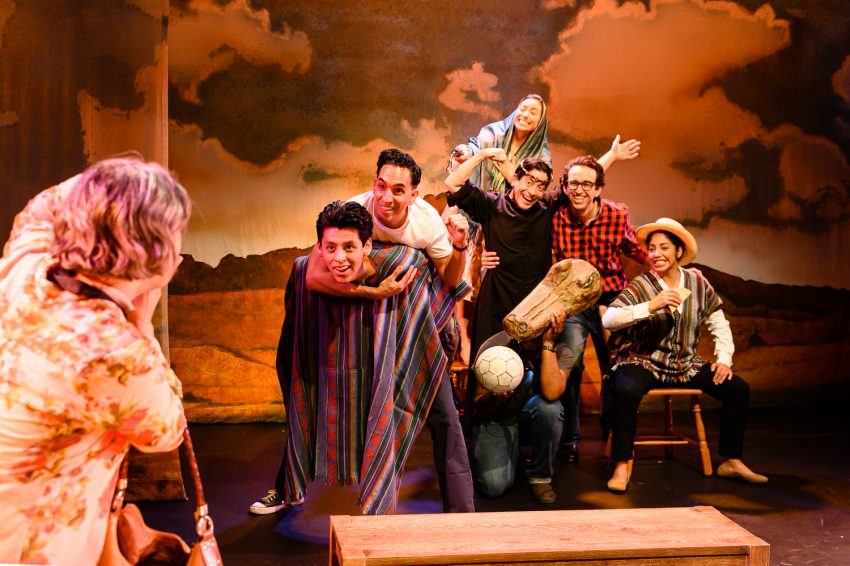 Octavio Solis Celebrates A Life Lived along the Border

We can all relate to family relationships, teenage pregnancies, romantic attractions, and youthful anxieties. But we cannot fully understand the duality of coming from what Octavio Solis calls the “other side” of “this invisible line we call the Border.”

Word for Word unveils selected chapters from Solis’s memoir Retablos: Stories from A Life Lived Along the Border, which dramatizes his growing up in the El Segundo neighborhood of El Paso. Sheila Balter and Jim Cave direct a brilliant cast that works their magic, using every word from Solis’s touching stories.

Set Designer Nina Ball uses a backdrop with a subtle painting of a mountain and clouds to suggest the Texas landscape.  Add an old-fashioned doorframe and we are transported to El Paso. Music and Sound Designer David R. Molina provides just the right Latin music for every moment.

In the story “Retablos,” grown up Octavio (sincere Brady Morales Woolery), in his bedroom, reflects on a cold snap that killed his parent’s pet canaries. Their deaths bring waves of weeping from his parents.  As a child he understands their intimacy and foresees how each will react at the other’s death. Lighting Designer Jeff Rowlings points light behind the backdrop to reveal Solis’s veiled “memories.”  We see Octavio’s parents howling through the sheer curtain.

In “The Way Over,” Gabriel Montoya plays Octavio as a wide-eyed youth, looking back at his parents before they were married, already expecting his birth. But his mother’s mother, Mama Concha (Maria Candelaria), the powerful matriarch, looks with disdain upon their union.

The young family begins their life in the U.S. in a dingy El Paso tenement with a single hot plate, struggling to make ends meet. His father works in Juárez, Mexico, where he can speak Spanish and return to El Paso each night. But a border policeman puts a stop to this practical arrangement.

Solis says, “This is a different time from now.  A time when people know compassion.  A time when kindness is haphazardly bestowed.”  Now, not a day goes by but we hear that legislators are putting cruel restrictions on immigrants from south of the border. The enforcement has grown severe.

In “The Quince,” Edie Flores, Regina Morones, and Carla Gallardo delight us Octavio’s seductive cousins flirt with him, hilariously. Octavio is flattered because  she looks like Natalie Wood in “West Side Story,” but with brown skin Costume Designer Callie Floor supplies sensational shocking pink dresses and frilly pink shirts.

Back in El Paso, as Octavio and his mother pass Sacred Heart, she recalls telling Father Gafford (quietly dignified Ryan Tasker) that her children are starving—she has no money for milk.  She hopes he would pray for them.

But the priest gives her dollars from his own pocket. He gives her money every week until Octavio’s parents can manage on their own.  Her recollection of this good man makes her burst into tears.

Word for Word makes each chapter from “Retablos” riveting and compelling.  It’s an emotional ride through an inspiring story.  A Must See!

“Retablos: Stories from A Life Lived Along the Border” –by Octavio Solis, directed by Sheila Balter and Jim Cave, by Word for Word, at Z Below, San Francisco, through Sunday, March 15, 2020.  Info:  www.zspace.org