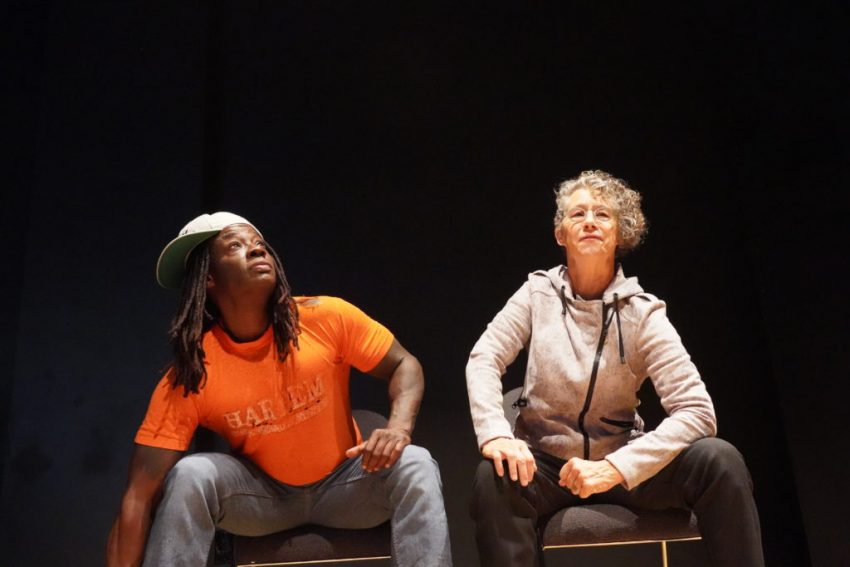 Magree revives queer history in her astounding stories as a dyke activist in the 60s, 70s, and 80s. We learn how radicalism, justice, and resistance can blossom into  survival  in oppressive times, then and now. 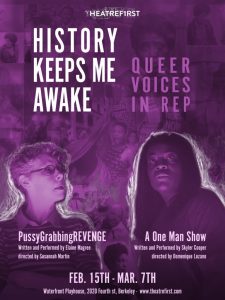 Magree recounts  how children were  pressured to conform to  “correct” gender roles. She was taught  that “football” and “penis” both signify “male” for boys.

Like a lingering scent, Magree shows how the past shapes  our futures. Surrounded by Trump’s chanting “grab her by the pussy,” she looks tiny and defenseless.  But this slim woman, who periodically dons a flower printed apron, is anything but silent. She’s hungry for justice, and gets angry when she relives bad male behavior.

In her raw, visceral solo performance, Elaine Magree describes a childhood where she was tagged as a “little mistake of a girl.” She rejected dolls, refusing to play with a toy kitchen and ironing board. We  want  to hug her, as her eyes search the audience for compassion for that child from the past.

Magree dishes up hearty sides of humor to nourish us. Her humor, like ‘bad dad’ jokes, hits the mark.  Consider this beauty: “What does one saggy boob say to another?  If we don’t get support soon, people will think we are nuts.” Magree dares to cross that boundary, too!

This powerful woman uses bitter humor to heal deep wounds. She finds a way to survive–from sexual harassment at work to women being assaulted and raped. The laughter allows us to digest grisly details. Even  more astounding, she tells stories of women sharing risk when a man continually harasses a group of tradeswomen.

They gang up on the “man who won’t take no for an answer.” With great ingenuity, the women create an impromptu phone tree to stop this guy’s predatory behavior. One woman calls another five, so in the end the man is confronted by a dozen angry women with power tools!

Magree’s stories span 60 years of queer history. She lets us know that Feminism is an ongoing project. We’re not through rising, yet! Join her movement because the Time is Now!