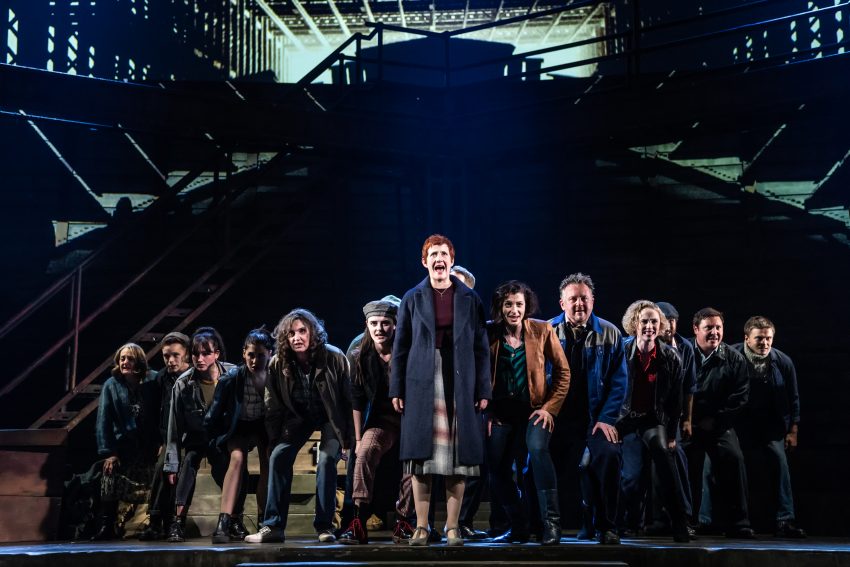 Sting’s Musical Floats My Boat, in Homage to 80s Shipbuilders

“The Last Ship” is everything you want from a musical written by and starring Sting: rousing songs, stirring political story, poignant romance, outrageously talented cast, and knock down amazing set.

It’s 1986, and Maggie Thatcher’s Conservative England is enforcing austerity. In a condemned North East England shipyard, Sting pays passionate tribute to his origins in Tyneside. Gathering clouds obscure the sun, and the last ship, “Utopia,” lies doomed to be scrapped before it’s complete.

The magnificent set, by 59 Productions, uses multiple screens and live action video to project  the busy shipyard. Skeletons of pylons and cranes loom cage-like, over the workers, held captive amidst looming dry dock walls, by the decrees of the shipyard owner, and a changing international economy.

Sting evokes escape, sailing away, homecoming, death, and imprisonment in our human cage. Jackie White (Sting) reflects that his father kept pigeons and that watching them fly away was like setting the soul free. As a transplanted Brit myself, and a student at the time, I marched against Thatcher’s education cuts, so “The Last Ship” resonates with me on many levels.

As Jackie White, yard foreman, Sting exudes star quality, inciting his soon to be unemployed union workers, to finish the build, regardless. Sting’s what Brits call a “Geordie,” a Northerner, from Newcastle-on-Tyne, a shipbuilding community for generations.  He’s passionate and powerful one moment, frail and broken in private the next.  Whenever he launches into a song, I’m mesmerized, what a voice! I can barely take my eyes off him, even as he defers to the abundantly talented cast.

Favorite songs emerge: “All This Time,” and “Island of Souls,” from “The Soul Cages,” about the death of his father.  Sting’s “When We Danced” and many newer songs, written especially for the musical, reflect his unique and haunting sound, with an Irish, Scottish and North East folk influence very much present.

“The Last Ship” features strong women: Meg (Frances McNamee), the hard bitten single Mom, who was bound for bigger things, ‘til the baby came along; the fierce teen daughter, Ellen (sonorous Sophie Reid), who wants to form a band in London; and Mrs. Dees (vibrant Orla Gormley), who hangs with the men of the yard. They sing the rousing “Women at the Gate,” while video of real shipyard wives and workers reminds us of their resolute resistance to the corporate closings.

McNamee’s darkly comedic Meg asserts: “Single mothers, venture capitalists and cockroaches, they’ll all still be around, come the next apocalypse.” And what a voice! Oliver Savile as Gideon Fletcher, the lover who leaves and returns 17 years later, is strong yet poignant. Jackie Morrison plays White’s wife, a stalwart, kind woman, with great vocal style.

“The Last Ship” depicts a familiar world, under corporate control, with globalism and new technologies threatening to undermine established industries. The electric energy of music and cast guide us through personal and political storms; and even if the story could be fuller, it’s enough to hang a musical on. The builders’ resolve and resistance hint at a better way for us, too. Sting’s show has tremendous heart and spirit, with a gritty edge of protest we can use, today.

Don’t let “The Last Ship” sail without you.