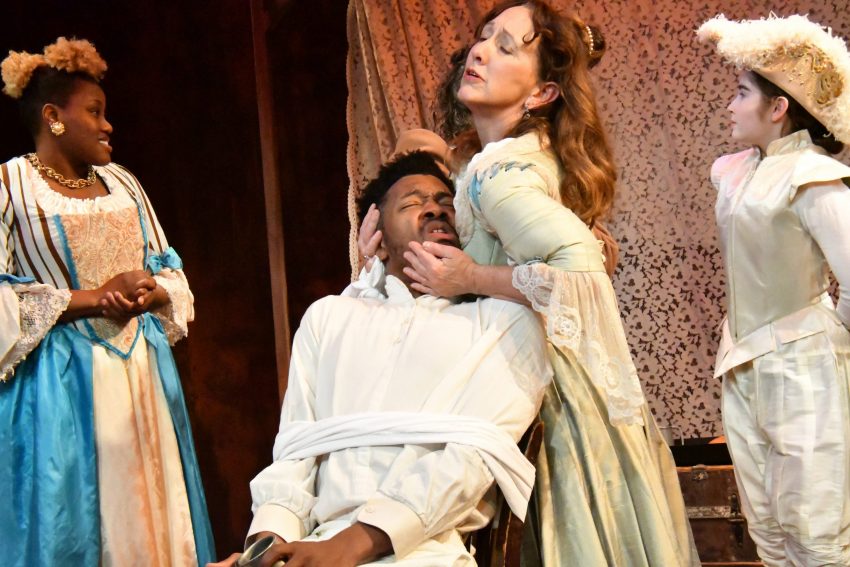 My friend and I thoroughly enjoyed “The Lady Scribblers” and I think any woman who has felt inhibited in her work will enjoy the comedy, too.

Michaela Goldhaber’s neo-Restoration comedy, produced by Custom Made Theatre and Those Women Productions, has all the rhymes and reasons for laughter at the expense of over-bearing theater owners and vacillating men in power.

As we wait for the curtain to rise, Barbara Streisand admonishes us to not rain on her parade and Dolly Parton extols her working “9 to 5. “We learn that King Charles II, upon returning from exile in France, has decreed that women shall now play themselves on the stage.  The royal edict emboldens female writers to take up their quills and write their own plays.

Restoration plays and comedies are bawdy, stuffed with sexually explicit language. The King and his rakish courtiers encouraged racy, sexual styles. Costume Designer Rachael Heiman has done a beautiful job outfitting both the grand and the more earthy characters.

In fact, Catherine Trotters, Delarivier “Delia” Manley, and Mary Pix were all successful female writers and playwrights during the Restoration of the monarchy.  Indeed, they paved the way for women to enter the theater world.

A delight at every turn, “Lady Scribblers” follows this inspired group of women playwrights: Emma Curtin trots out Trotters, Oluchi Nwokocha  delivers “Delia” Manley, and J.J. Van Name portrays Pix. All these talented women are opposed to the “spectacular” plays put on by theater managers such as Christopher Rich (robust Ted Zoldan).

At his United Company at Drury Lane, Rich employs “flying” actors and pyrotechnic effects.  His productions threaten the witty, passionate, “legitimate” Restoration dramas like those of Aphra Behn, the woman whose funeral we witness in the opening scenes.

Scenic Designer Heather Kenyon shows us how far a bit of lace, an old trunk and a couple of boards can go in depicting a graveyard, a coach, a Chocolate House, a tailoring shop, and a theater.

Michael Houston makes his Lord Hammington particularly endearing.  Houston comically swoons and rolls his eyes whenever a woman touches him or pays him any attention. Houston’s Hammington suggests that he is not getting that sort of attention at home.

In a funny slapstick scene,  the lady playwrights and rebel actors realize that they need  an official patron to legally create their own theater.  As the aristocratic Lord Chamberlain, Houston is comically fitted for a new suit of clothes. But the Ladies barge in and tie him up, demanding his offical support.  What better way to persuade a Lord   than to strip him to his drawers?

How fitting to open “The Lady Scribblers” on International Women’s Day. Women from Mexico to Pakistan are still marching in protest about their treatment by a world governed disastrously by men. Well worth a visit to see how this fresh comedy exercises newfound power.

“The Lady Scribblers” by Michaela Goldhaber, directed by Tracy Ward, by The Custom Made Theatre, co-produced with Those Women Productions, San Francisco, through Sunday, March 29, 2020.  Info: custommade.org