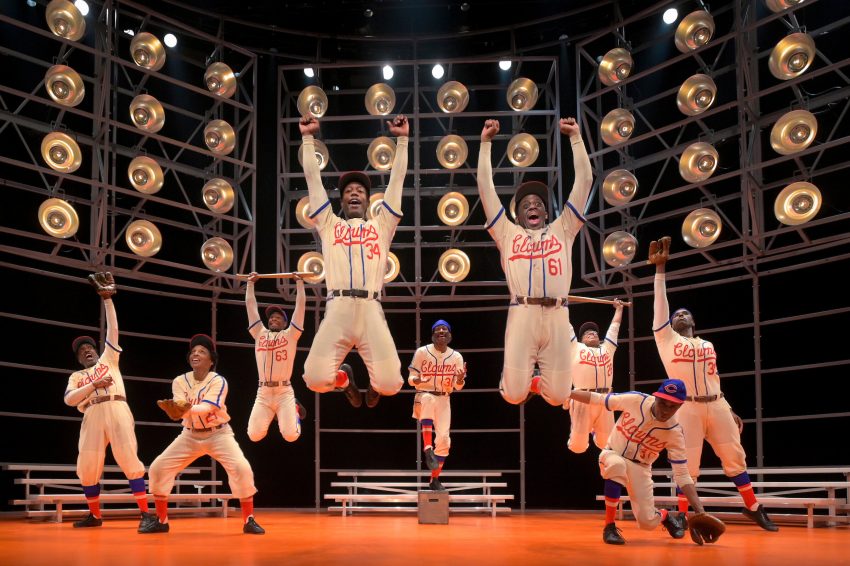 Toni Stone was a real live woman who yearns to play baseball. But she’s female and Black. She manages to overturn every prejudice, joke, and stupidity—until she plays with the San Francisco Sea Lions, and then, the Indianapolis Clowns in 1953. Toni Stone is the lone woman in the Negro Leagues.

Dawn Ursula is a force of Nature as Toni—magnificent, statistic-spewing, obsessed—with her eyes on the Prize, joyfully!

When Toni Stone joins the Negro Leagues, she takes center stage, second base, and the whole darned diamond as her birthright. She is born to play baseball. She only feels complete when that round horsehair hits her glove and nestles there. She’s all about the “reach”—that completes her life.

Toni Stone says: It’s the weight of the thing, itself, the ball—that I know better than anybody…it’s all about the reach.” Toni’s mind, body, and heart are built for baseball—she seeks the ball more than the boys.

In their impeccable Indianapolis Clowns uniforms, the nine players bring boldness to Lydia R. Diamond’s lyrical language. Toni’s game expresses our common search. Woe to those who stand in the way of talent.

The guys each have a ‘take’ on her uniqueness. Daniel J. Bryant as Spec reflects an intellectual’s point of view, with his nose in a book—racism prevented his flowering. JaBEN Early plays King Tut, a smiling, lovable, life-affirming, giant devoted to winning.

Sean-Maurice Lynch lives up to the name of Stretch, reaching for far-off fly-balls. Jarrod Smith as Woody provides reliable batting power. And Ray Shell is the man who woos and wins the elusive Toni.

That’s eight gents—playing multiple roles while going batter-up for the team. Each one steps up to the plate and delivers this question:  Who has the right to keep this woman and these talented people from playing their game, pursuing their rights?

The answer is no one—even though our history has hobbled so many from the start—it takes an African American woman to step forth and say—I’m going to play ball, no matter what the cost.

Generations will thank her for being herself in the face of exclusion.

They tell us to wait our turns—but Jackie Robinson, Harvey Milk, Harriet Tubman, and Toni Stone say: Now! They act in the face of opposition—and change the nation. They create opportunities.

Pam MacKinnon has directed this work with drive and delight—it’s like watching a three-ring circus, with these superb actors in a kaleidoscopic vision of becoming themselves. When the story line falters, we may lose the arc, but Toni’s story persists.

Toni Stone wonders where she’s headed—but she never gives up. By the end, we all want to play ball with the exhilarating Toni Stone. We all want to celebrate and emulate her.