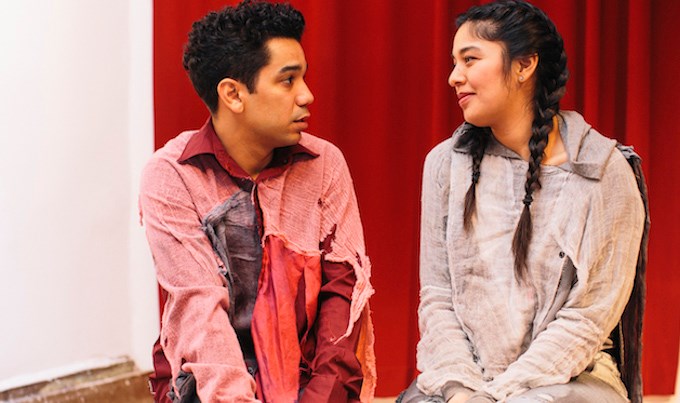 In Gary Soto’s “The Afterlife,” two Fresno teenagers, Chuy and Crystal, die in the opening minutes. Chuy is murdered for an unintended slight, and Crystal kills herself. They are the victims of an alarming spike of teen deaths from violence and suicide. Despite that downer of a beginning, “The Afterlife” is uplifting.

The finality of death loses its meaning for these depressed and confused youth.  In “The Afterlife,” San Francisco Youth Theatre at The Flight Deck shows us Latinx teens who are assailed by expectations from all sides, including omnipresent social media. Girls and boys face “body shaming,” for their size or looks. They struggle for approval from their peers, and with unrealistic expectations from their parents. Soto allows his teen audience an opportunity to look back on their lives after dying.

Who hasn’t wondered what it would be like to look back on a life lived?  How will family, friends, and enemies react to our passing? “The Afterlife” starts with two tragic teen deaths and we witness the rippling emotional waves.

Deeply troubled Crystal (outstanding Bianca Catalan) is devasted by her rejection letter from USC.  When she compares herself to her sisters, Crystal sees herself as a failure. She also falls victim to body shaming so common on social media. Losing hope, she overdoses.

When she enters the afterlife, she meets energetic, upbeat Chuy (dynamic Edwin Jacobs), who has been killed by a teen who imagines an insult over his yellow shoes. In the afterlife, Crystal and Chuy discover they can visit their families and old neighborhoods in the Fresno barrio. Together, they get to see the effect of their deaths on family and friends.

Chuy and Crystal fall in love but realize it is too late for them, and too late for the people they left behind—but not too late for us.  Soto’s brilliant play makes us realize that life is precious and needs to be cherished.

“The Afterlife” elicits my own memories of teen-age depression and personal struggles. I believe everyone who sees Soto’s drama will be reminded of their own youthful struggles.

“The Afterlife” cries out for teens and adults to pay attention to our local communities.   Soto’s poetic sensibility enlightens teachers, social workers, and all of us who work daily to understand the teen mindset.

“The Afterlife” by Gary Soto, directed by Dyana Díaz with Cliff Mayotte, at The Flight Deck, Oakland, originally scheduled for March 13 – 22, 2020.  Info: sfyouththeatre.org

Note:  Shows have been postponed, but you can watch “TheAfterlife” at Vimeo https://vimeo.com/360719822 and YouTube https://www.youtube.com/watch?v=Drd00eyMBEo