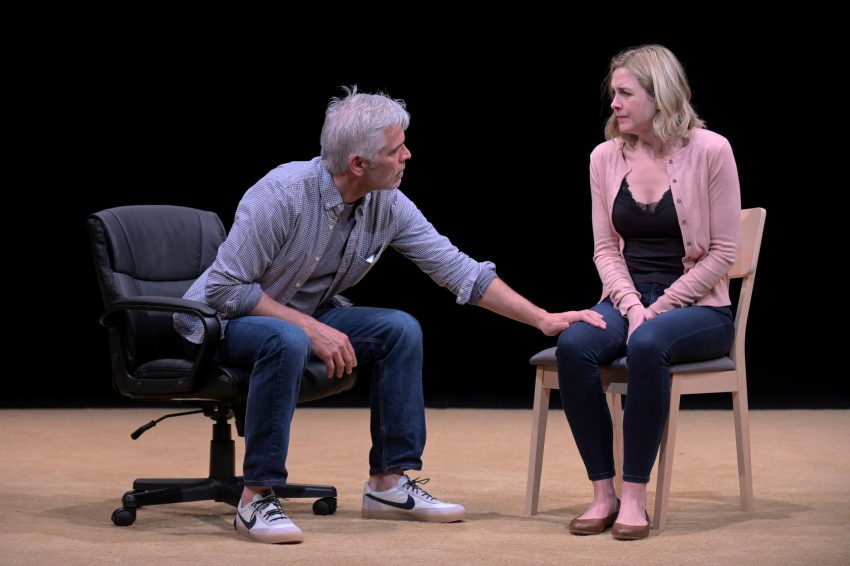 In 2004, Penelope (Clea Alsip), a smart-ass Stanford grad who talks way too much, applies for an intern job, letting the boss know she intends to be a surgeon. She is self-assured and forthright. When the boss Otis (R. Ward Duffy) places his hand on her knee, fearless Pen accepts, inviting the passionate affair that follows.

We know the horrors women face: verbal sexual abuse, physical torture, rape, molestation, the Harvey Weinstein’s and Fox henchmen. But Penelope fails to evoke our empathy.  She continues to agonize for years over her love affair with Otis because he’s such an admirable and generous guy. Later, Pen admits she “allowed him to have power over her.”

A black screen looms above, with bold white letters showing 2004 and 2018, as the time shifts forth and back. We flash from Otis’ Artstart office to sex with Otis in a motel. Cortesi keep us on a whirligig of affairs and recriminations, while Pen dithers over marrying her infuriatingly patient friend Jaime (gentle Cyrus Bakhtiairi). There’s no shortage of dark secrets on all sides.

When two former employees, aggressive party-girl Vee (Rebecca Schweitzer) and ditzy Whitney (Mari Vial-Golden), invite Pen to join their public exposure of Otis, she wonders about the young women’s honesty. She knows that the encounters between the older man and the younger women were, in fact, consensual.

Harassment implies unwanted or unwelcome sexual comments and touching, met with disdain. Penelope slowly begins to question Otis, who has a pattern of manipulating young women into sexual situations. He romances them with gifts and teaches them business tricks. And they know he’s married.

Flashing forward to 2018, Pen is questioned by New York Times reporter Ron (Robert Sicular), investigating the women’s allegations. Pen retorts, “Seduction. I accepted those advances. Twenty-two-year old’s have appetites, too.  . . . I did not feel exploited.” So, will she join the attack on Otis?

But the extent of Otis’s exploits brings on jealousy. For the first time, the word “victim” comes to her lips. She asks: How many women did he date? Did he lie to her? Was she the same as the others? Did they all ink the same tattoo on their arms? Penn has lost her “exceptionalism”—and it rankles.

Cortesi’s immature Pen jumps from one lily pad to another in a pond called Love, but she sticks to the shallows. She even has sex with Otis just two weeks before her own wedding!

As Pen, Alsip gives us a lively and convincing portrait of a privileged girl who refuses to grow up. She watches warily as Vee and Whitney joke about their fun with Otis at bars and concerts.

Mike Donahue’s direction of the carousel of scenes is laudable. And the minimal staging throws the women’s feelings into sharp relief, leaving us wondering what motivates this cryptic boss.

Pen has to decide. Will she join the sketchy case put forth by two unreliable witnesses?  Cortesi leaves us doubting that Otis is a true predator,  and that Penelope is a real victim–after fourteen years of “love.”

“Love” leaves us lost in a gray zone, wondering about complicity and sexual morality.