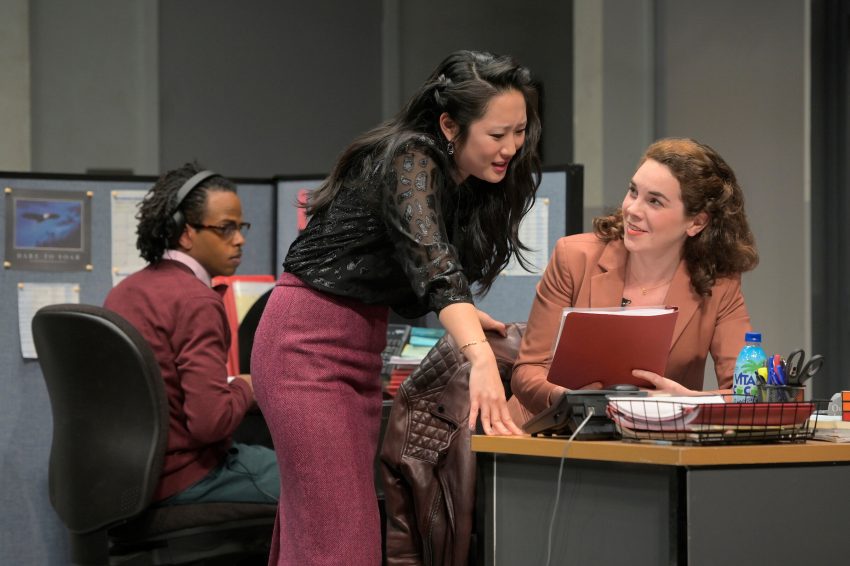 Watching ACT’s streaming version of “Gloria,” I miss being a participant—there’s nothing like live theater. But I enjoyed how MacArthur Fellow playwright Branden Jacobs-Jenkins explores young workers competing in a toxic show-biz office, like Entertainment Today.  He drops us into a smartly designed sterile office by Lawrence E. Moten III, complete with cluttered work-stations.

Sharp and witty, three bored employees insult each other, competing for attention and assignments from unseen supervisors. Kendra, expensively-dressed Melanie Arii Mah, a fast talking, cynical Harvard powerhouse, fights for the juicy story about a pop singer’s suicide, that she loses to her supervisor. Kendra spends most of her time shopping and thinks, “I feel like I’m on the Titanic.” We can feel her hopelessness at this sinking job.

Dean (engaging Jeremy Kahn) comes to work hung over, and wants to leave. Kendra and Dean throw barbs at each other, like hand grenades. Looking on, new worker, the naïve Ani (versatile Martha Brigham) tries to placate them.

They all claw to get ahead, but don’t work, just accept their fates. When Lorin, Head Fact Checker (empathetic Matt Monoco) bursts into and demands quiet from the noisy writers, they ridicule his seriousness. Surprisingly, the copywriters show no allegiance and no friendships. They hide their endless  throat-cutting competition behind sarcasm.

Maybe they stay because they are “fast-trackers,” who need a quick win to reach a higher rung on the corporate ladder. Maybe they are immobilized by their fear of failure. Could they be getting used to living on the edge?

We are shocked when Gloria, a dead-end fact checker, who has worked there for fifteen years, appears in a slovenly big green sweater. Lauren English brings a subdued dynamism to the disgruntled, long-suffering, and mysterious employee.

And then it happens. Their toxic culture shifts in a flash, transforming all their lives.

Even Miles, charming Jared Corbin, a pressured Harvard intern, feared a catastrophe. Miles admits, “I feel a deep anxiety that everything I know about the future will be gone one day.” And then to our own shock, it is gone. The great unexpected comes—like the Plague.

In Act Two, at a long Starbucks’ counter, under the familiar green logo, the humor vaporizes.  The raw essence of these Millennials’ motivations is suddenly exposed.  Three of the survivors sniff out personal meaty bits—like birds of prey. They succumb to decades of white-collar conditioning, vying for the golden ring, a published memoir.

Yet, two characters change completely, finding meaning in tragedy. Dean, who suspends his belief in the system, moves back home, the most honest of the bunch. And Lorin persists.

In Act Three, we swim in a brilliant bright pastel-colored, cartoon-like California publicity office, where ads and attitudes are still King. In Los Angeles, Lorin comes looking for a job. Still serious, he puts on headphones to shut out the cultural static.

“Gloria” is a winner. Jacobs-Jenkins tells a raw, honest story about a toxic office in an infected culture—with wit and humor. Yet, toxic competition permeates all our lives—in offices, schools, stock markets–why do we choose to stay in them?